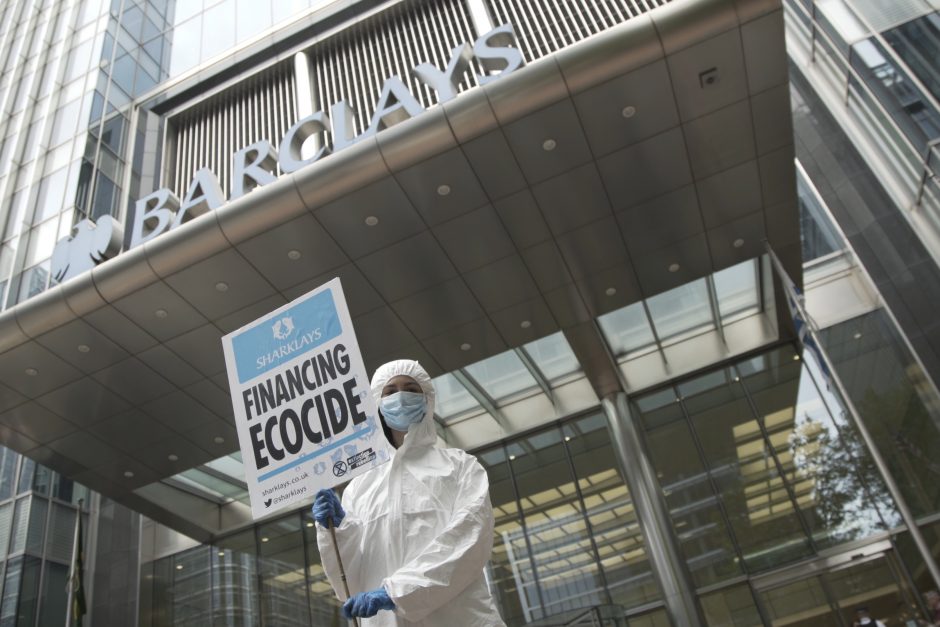 Today, activists from Money Rebellion (a group within Extinction Rebellion) and Animal Rebellion have taken on credit card debt to pay reparations on behalf of Barclays, calling on the bank to cancel the debt and start repairing the harm they and the wider financial system are causing. Leading the action is GP Sarah Benn, who has made a video explaining why she is taking this action.[1]

Dr. Sarah Benn states: “Our financial system is killing us. Our lives and planetary stability are being sacrificed for ever-increasing profit and growth. Shameful inequality is laid ever-more bare by the pandemic and increasing climate & ecological devastation financed by profiteering institutions. Having enjoyed decades of good income in a secure job that seeks to preserve life and health, I have a responsibility to put my money where my mouth is and take the consequences. Today, I’m acting and speaking out in the hope that other individuals who are in a position to do so will join me and that institutions like Barclays will step up and do the right thing.”

In Barclays’ ghastly history, it had invested in South Africa’s Apartheid and bankrolled transatlantic trafficking in enslaved people.[2][3] Today, it’s driving biodiversity loss,[4] plastic production,[5] and world hunger.[6] Barclays is the biggest funder of fossil fuels in Europe, having invested more than $118bn since the Paris Agreement, and was 2019’s worst bank in the Arctic for funding fracking, coal, and gas.[7] As the main creditor of Cargill, North America’s largest beef processor, Barclays finances a leading cause of mass extinction, greenhouse gas emissions, and air and water pollution.[8] Moreover, Barclays exploits tax havens, snatching billions of dollars away from easing global poverty and hunger with its tax-dodging, carrying forward its past racism into present-day neocolonialism. Considering the independent and synergistic effects of Barclays’ actions are myriad atrocities against life and climate, it’s a grave hypocrisy that Chairman of Barclays UK, Sir Ian Cheshire, is a UK Government advisor for COP26.[9]

With this debt strike, XR’s Money Rebellion [10] is drawing on the historical tradition of financial disobedience in order to expose the political economy’s complicity in the climate & ecological emergency. [11] Since Barclays’ investments help fuel current and future devastation, UK citizens are using their Barclaycards to make donations to frontline organisations battling the bank’s effects. These include Survival International,[12] which helps global Indigenous speakers report on grim inequities, the Akacia School,[13] which provides a culturally-relevant education for UK children of Afrikan heritage, and a range of animal justice and plant-based food organisations. Rebels have little or no intention of repaying the debts, and have pledged donations to match any debt Barclays forgives in acknowledging its part in having caused incalculable harm.

Participants have issued an open letter[14] to the bank, demanding that Barclays:

Another debt-striker, Jane McCarthy, says: “The vast majority of Barclays customers probably have no idea of the terrible harm the bank has created, and continues to create, in financing industries and activities that are destroying our planet. I am taking part in this action by Money Rebellion because Barclays has to acknowledge its immediate need to change course and make reparations for the terrible harm its financial activities inflict on people and their communities.”

Zoe Cohen, also taking part in the action, states: “Barclays UK has 24 million customers![15] That’s 24 million individuals or businesses, and I’d bet most of them are blissfully unaware of the harm their bank is doing and how it’s reducing the life chances of their children. So I’m doing this to demand that Barclays takes responsibility for its actions and the ecocidal harm it’s causing, and to help raise awareness about the truth of Barclays amongst its millions of existing customers. The more customers switch banks or threaten to do so, the more Barclays might start to listen. What I want to say to the board members of Barclays is: ‘What stories do you want your grandchildren to tell about you once you’re dead? That you didn’t change and therefore contributed to the death and suffering of billions of people and species extinctions, or that you woke up and led the charge to a better world? It is time for you to decide which side of history you’re on.’”

Any bank who continues to fund climate destruction demonstrates that it cannot be trusted with our money and leaves monetary defiance as our only option. We encourage anyone who wants to stand up to toxic banks to join the Repair Harm debt strike action[16] and/or the wider Money Rebellion team.[17]