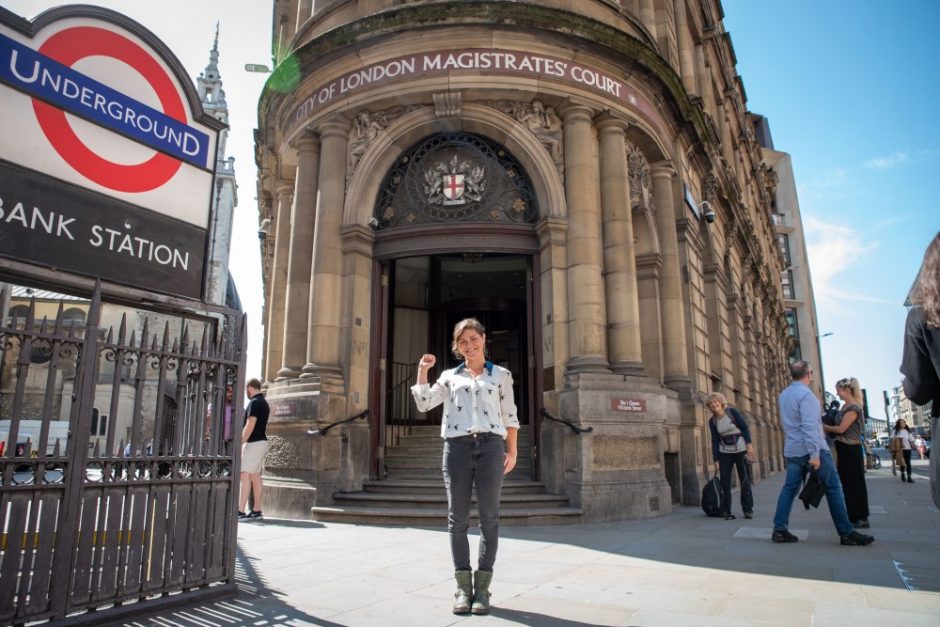 Anna, who is also an amateur actor and vegetable grower, was arrested under the pink boat on the first Friday of the April Rebellion in 2019. She pleaded guilty at one of the first Friday plea hearings on August 23rd. The judge at City of London Magistrates’ Court did not grant her request for an absolute discharge. Instead, she was given a six month conditional discharge and ordered to pay £105 in court costs. She was arrested again during the 2019 October Rebellion but the charges were dropped.

“My name is Anna and I was arrested underneath the pink boat at Oxford Circus on the 19th April. I would like to give a small explanation as to why I was there. I’m sure you have heard a lot of facts already so I’m not going to focus on them and save us some time.

I have known for many years that us humans are not managing to take care of each other and the planet. Recently, I learnt the severity of this and the desperate need to act now. We are at a turning point in history. Looking at the world right now there are species in mass decline, forest fires, famines, floods, droughts and glaciers melting at a rate like never before in human history.

The UN has given a serious deadline of 12 years to halt accelerating temperatures, the deadline is actually agreed amongst many scientists to be a conservative estimate. We are rapidly approaching tipping points of no return and the inevitable collapse of ecosystems and societies. Now is our only time. Now could even be too late. How can I find this out and not act upon it?

I learnt back in school about greenhouse gasses and pollution, yet since then the environmental and ecological situation has spiralled out of control. Whatever good work has been done, these efforts are clearly too weak, deep shifts are needed or we are heading towards a nightmare I cannot face. How can I not look for a way out of this nightmare?

Alongside Greta Thunberg and David Attenborough, the actions of Extinction Rebellion have succeeded in forcing this climate crisis to the front of the political agenda and the public’s thinking.

We have huge support with a growing understanding of the urgency. Councils throughout the UK have declared Climate Emergencies, and two weeks after the April uprising the Welsh Assembly and then the UK government followed suit.

I am very nervous being here in court. I don’t want a criminal record, I am a care worker, I care deeply for my community both locally and globally. I love the Welsh countryside I call my home. I feel I have no choice but to make this sacrifice and I am both scared and proud of it.

I have acted with civility and good humour throughout. In fact, far from public disorder, we created spaces that were non-violent, safe, creative and pollution free.

I feel sure of my stance in this glaringly obvious situation. I plead with you to join me, to see the bigger picture and take the stand you need to make. I have chosen today to plead guilty, not because I feel I’ve done anything wrong, but I’m tired emotionally and I feel I could better use my energy to fight for change in places outside the courtroom. I support all those who are pleading not guilty.

The peaceful action I took was to prevent a far greater disruption with incredibly frightening prospects. If it results in a criminal record then it’s a sacrifice I have to make. In the face of this I ask you to consider all I have said and to recognise that the actions I took were for the good of our communities and our earth.

Would you consider, in these extenuating circumstances, granting me an absolute discharge?

Thank you for hearing me.”