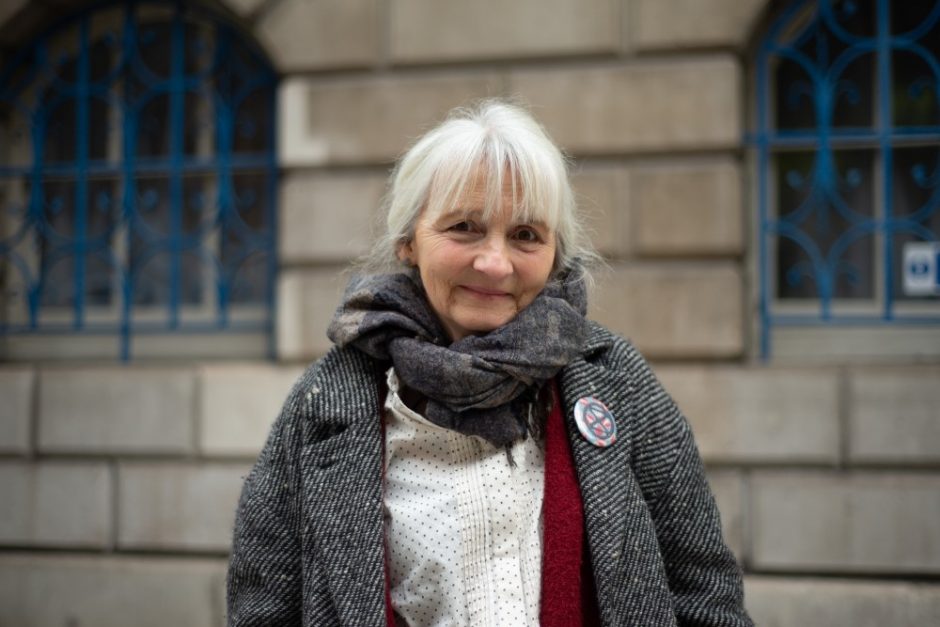 Sue, also a potter and a grandmother, was arrested near Marble Arch on the last day of the April Rebellion in 2019. When she pleaded guilty at City of London Magistrates’ Court on 8th November 2019 she was given a six month conditional discharge and ordered to pay £105 in court costs.

“It has taken months for me to fully wake up to the hideous implications of this climate crisis. Since XR’s first protest a year ago when I was alerted to the situation, I have had feelings of grief, loss and helplessness – it’s been a bit like a bereavement.”

I am 67. I am a retired primary school teacher and a potter. I am a mother and a grandmother with two wonderful grandchildren who I love dearly, one of whose fourth birthday party I will be going to tomorrow.

When I think of their future, I feel a huge sadness and I am fearful for the future of all my family, for all living creatures and for our beautiful world. It has taken months for me to fully wake up to the hideous implications of this climate crisis: since XR’s first protest a year ago when I was alerted to the situation, I have had feelings of grief, loss and helplessness – it’s been a bit like a bereavement.

I feel that I have been stupidly naïve in trusting the government to have our best interests at heart. There is now overwhelming scientific evidence that we are facing a climate and ecological crisis; over 11,000 scientists around the world have endorsed a declaration that states: “clearly and unequivocally that planet earth is facing a climate emergency…accelerating faster than anticipated…threatening natural ecosystems and the fate of humanity”.

We must act now and make urgent and radical changes to our society.

Sir David Attenborough told the UN in 2018: “Right now we are facing a man made disaster of global scale, our greatest threat in thousands of years: climate change… if we don’t take action, the collapse of our civilizations and the extinction of much of the natural world is on the horizon. Time is running out. Leaders of the world you must lead.”

Our leaders have not led. I believe that they have not acted in the public interest by providing people with honest information about the scale and urgency of the threat. They have not told the truth and tackled the crisis with the necessary urgency. The government has failed to inform the public and is still carrying on with business as usual, for example, with plans to expand Heathrow airport.

The media have also failed to give this issue the attention it deserves; as Greta Thunberg says: “A football game or a film premiere gets more media attention than the biggest crisis humanity has ever faced.” Much of the population is ignorant of the real gravity of the situation.

Until April I was a law-abiding citizen, and it is interesting that our desperate need to bring about necessary changes has caused me and many others to resort to non-violent, civil disobedience resulting in arrest. Marches, petitions and letter-writing have proved to be insufficient. I don’t want to be here in court, I didn’t particularly want to be demonstrating on the streets in April (though the genuine friendliness, creativity, positivity and love of the people at the action was heartwarming). I want my life back as it was – working on my allotment, making pots or any number of other things.

But the time is running out. We are in an emergency situation which is not being addressed and I believed that it was necessary to join with thousands of others in raising the alarm to persuade those in power to listen to what the scientists say and to act to minimize the widespread ecosystem destruction and extinctions that climate breakdown is causing: to avoid disaster before it’s too late. What else could I do?

I am proud to have acted in the tradition of the suffragettes, Gandhi’s Salt Marches and Martin Luther King and the Civil Rights Movement, and, despite being penalized, feel vindicated since, together with Greta Thunberg and the youth climate strikers, Extinction Rebellion’s non-violent direct action has catapulted the global conversation about climate and environmental breakdown to much higher on the agenda and has been responsible for Parliament declaring a Climate Emergency (they have done lamentably little since so we are not finished yet!). Furthermore, many more members of the public now list the environment as one of the top issues facing the country – the number has more than doubled since April.

I’m prepared to take responsibility for my actions. The unimaginable results of inaction, some of which are already being felt around the world, are too awful to contemplate: widespread famines, droughts, flooding, migration crises and unrest and war untold suffering. What else could I do?

When I sat down in the street at Marble Arch I was thinking of my beautiful grandchildren and their future. I want them to know that I tried my hardest to avert climate catastrophe. I do not want to look back and feel I did nothing to stop the destruction of our wonderful earth, the only home we have. I really wish that I could turn back the clock and go back to my life as it was a year ago before I realized the seriousness of the situation, but I can’t…

What else could I do?”