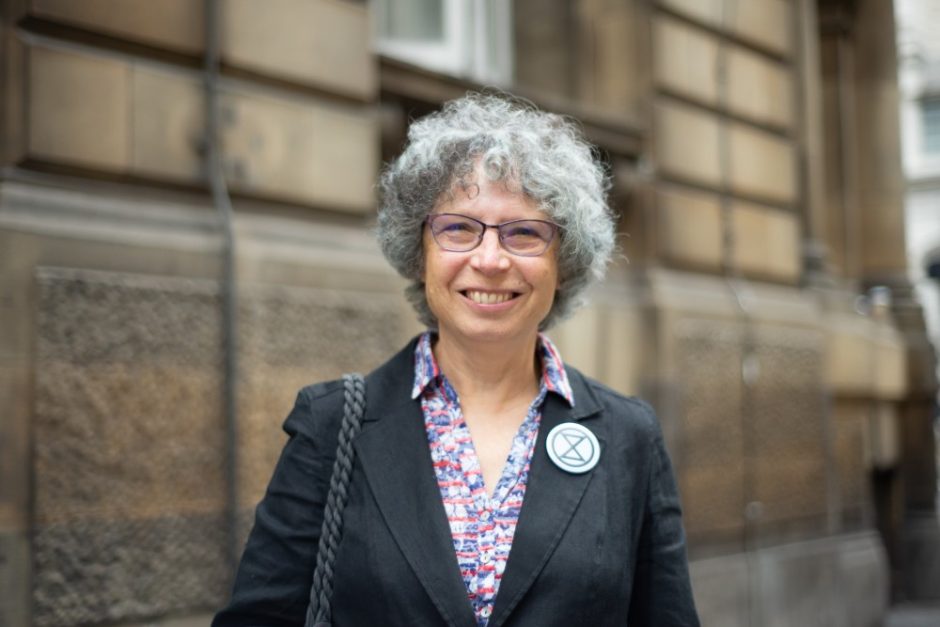 Steph, who is also a former probation officer, was arrested at Parliament Square on 18th April 2019 as she sat in the road singing. She pleaded guilty on 1st November 2019 at City of London Magistrates’ Court and received the standard six month conditional discharge and £105 court costs.

“I am 68 years old, now retired after a career as a probation officer, Court Welfare Officer and most recently as an NHS Psychotherapy Manager. This is the first time I have been charged with any offence and I have not found it easy putting myself in this situation of deliberately breaking the law and hence being arrested and appearing in court today on the other side of the fence from my previous professional appearances.

I didn’t want to do this and found it hard knowing that our actions in April were causing disruption and inconvenience to many people’s lives. But I felt impelled to act in the face of the catastrophic future I saw unfolding before us all.

I have long been concerned about climate change, and in the past attended demonstrations, signed petitions and wrote letters to my MP. But like many people, I only half accepted the magnitude and immediacy of what was facing us, and largely carried on with my life.

It was with the publication of the special IPCC report on Global Warming, and subsequently going to a talk offered by Extinction Rebellion, that I really took on board that despite 30 years of climate talks and lots of treaties and pledges, greenhouse gas emissions were continuing to grow year on year, and we have only a few years to take radical action and change course if we are to have any chance of avoiding catastrophic climate and ecological breakdown, and the possible collapse of civilisation.

Since then my daughter has told me that she is pregnant with my first grandchild, and my delight at this news has been overshadowed by fear of what kind of world this new little being will grow up in.

Just reading the news as I was writing this statement a few days ago, there were forest fires raging in California, flooding and landslides in Japan, and flooding across many parts of England and Wales. Climate change is not something we can deal with later. It’s happening now.

I decided that I couldn’t live with myself if I didn’t do everything I could to avoid what was looking like a sleepwalk to disaster, leaving a planet unfit to live on for all future generations, and bereft of the beauty and abundance of wildlife my generation had grown up with.

So I became active in Extinction Rebellion in February this year and attended the first International Rebellion in April. I do believe that our actions then have made a significant contribution to a real shift in public awareness of the climate emergency, though this has tragically been overshadowed by other political events and resulted in little action by our government.

So yes, I acknowledge that I broke the law, but we desperately need urgent governmental action around the world to avert disaster, and I hope you will accept that I was true to my own morals in trying to play a small part in making that happen.”

Steph was interviewed by the Sheffield Star.