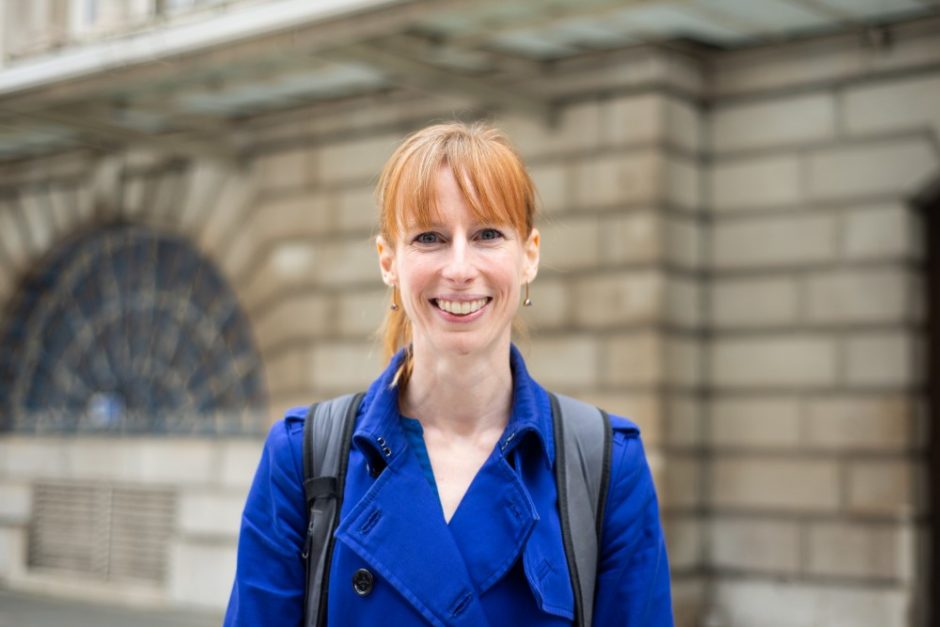 Katy, a mother of two, was arrested on Waterloo Bridge on Easter Sunday during the April Rebellion in 2019. She pleaded guilty on 8th November 2019 at City of London Magistrates’ Court and was given a six month conditonal discharge and ordered to pay £105 in court costs.

“I plead guilty as charged. In April, I sat down on the road as part of a peaceful road blockade. This is why.

I want you to understand what it is that made me say goodbye to my husband and two young children on that beautiful, hot, sunny Easter Sunday, when I should have been going for a picnic in the park with my family.

Instead, I packed my rucksack and got on a train up to London on my own, to go and sit on the hot tarmac of a bridge, with people I didn’t know, waiting to be arrested. That’s no-one’s idea of a good day out, and it certainly wasn’t mine. So why did I take this considerable personal and professional gamble?

I did it because I’m scared – scared of what unchecked climate change and ecological destruction will mean for the future of our planet and for the world my children, who are 4 and 5 years old, will grow up in.

I did it because I know that there is no bigger or more important issue facing humanity. I did it because the XR movement is the first time I’ve felt hopeful that change can happen. Blue Planet 2 got us all thinking about plastic pollution and the XR protests in April, along with Greta Thunberg and the Youth Climate strikes – got people talking – really talking – about climate change for the first time.

As a GP, I recognise as well that the Climate and Ecological Crisis also presents an impending public health crisis globally and in the UK: mass migration putting strains on public health services, widespread starvation in some parts of the world, the spread of diseases like malaria as the climate warms, and in the UK, air pollution causing children with asthma to die. I feel compelled to use my position as a health professional to educate people about the climate crisis and to show that I am prepared to put my money where my mouth is, to show just how important this is.

I’m currently under investigation by the GMC for my arrest in April, so it was a significant professional gamble for me to do this. But my medical and scientific colleagues are starting to support actions like mine. In fact, the editor of one of the most famous and respected medical journals in the world, The Lancet, gave his support to the protestors last week. More than that, he actually stated that “health professionals have a responsibility, an obligation, to engage in all kinds of non-violent social protest to address the climate emergency. That is the duty of a doctor”. Just this week, 11,000 scientists globally have agreed that the world is facing a climate emergency and that action is needed now.

Now, I think there’s a danger that these words: ‘catastrophe’, ‘emergency’ and ‘crisis’ become overused and lose their power and their significance. It’s vital this doesn’t happen. We are using words like ‘catastrophe’ because they are accurate descriptions of what is coming. I believe that our government and international governments hear the words of the protestors, but either don’t believe the truth of them, or ignore it because the changes needed are too big and too unpopular with voters.

Coming back to a more personal note, like all parents, I’ve talked to my children about what the police do. They ‘catch bad guys’ and put people in prison who have done naughty things. They keep us safe. I had to explain to my son why there are times when things are too important to abide by the rules and that’s why I got arrested.

I truly believe that acts of non-violent mass civil disobedience are needed to make our government wake up and make the changes that are needed. I now think that it’s the only way we can possibly hope to change things in time. History has shown us that non-violent protest is often the final catalyst for huge social changes, such as we need now. Look at the suffragettes, and the civil rights movement. History shows us that they were in the right, and history will be on the side of these climate protests too.”