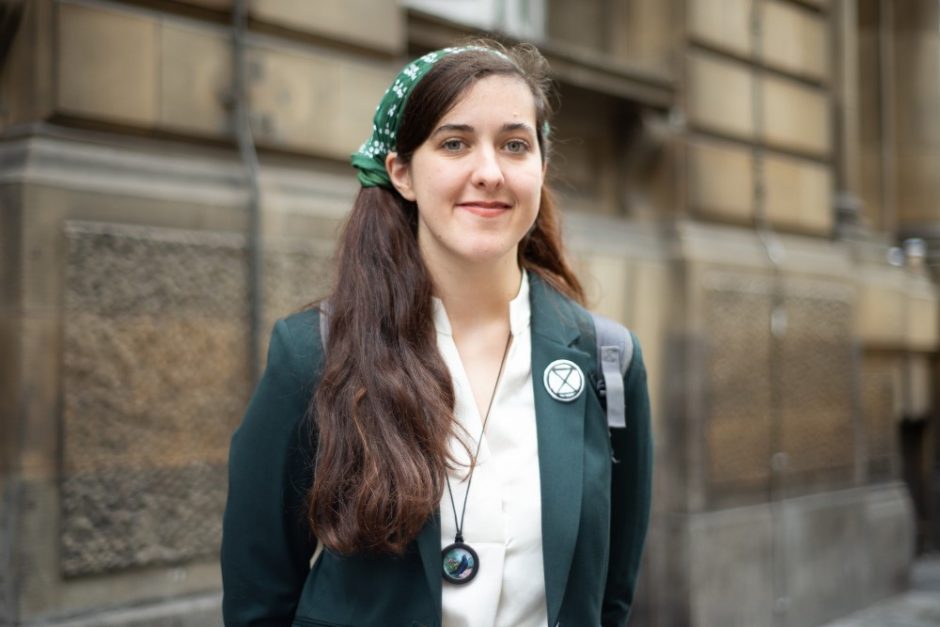 Eve, who has been involved with XR since the Declaration of Rebellion in October 2018, was arrested in Parliament Square on 18th April 2019. She pleaded guilty that November at City of London Magistrates’ Court and received a six month conditional discharge and £105 court costs.

“My name is Eve, and I am 23 years old. I am, and hope to be by profession, a scientist; I completed a Master’s degree in Zoology in June, I have a paper under review, and am in the process of applying for PhDs. So my understanding of the climate crisis is not second hand.

For my research, I want to study the effects of climate change on phenology, that is the timings of lifecycles. Because the life of every living thing is so finely tuned to its environment, the burst of leaves, emergence of caterpillars and the hatching of the chicks, everything is perfectly timed. We are only beginning to understand the complexity of these systems and our own reliance on them, and rising temperatures will throw them all out of kilter faster than they can adapt.

Climate breakdown threatens everything and everyone that I love, and I will do everything in my power to prevent the worst of it. For me, that has meant taking an active part in sustainability at my school and in my students’ union, campaigning for renewable energy provision. It has meant giving up meat and other animal products, and not flying to the other side of the world to see my family. It means studying climate science and its effects on people and the natural world.

And on April the 18th, it meant breaking the law. I never so much broke a school rule before – I have a deep rooted respect for authority. But Extinction Rebellion has allowed me to be brave and act according to a higher morality, appealing to conscience, virtue ethics, and the declaration of human rights, which is being violated by our consistent inability to act on what the science is telling us.

Please don’t be deceived by the shifting targets and political promises that have been decried in the last decade as an excuse to not act. This government has systematically undermined all policy that could allow us to reduce our carbon emissions, from obfuscating the dangers of climate breakdown to the public and putting it at the bottom of the agenda, to appointing climate sceptics in positions of power over environmental policy and actively subsidising fossil fuel companies.

In doing so, they expose us to a future of food insecurity, heatwaves and flooding, increased disease and other health risks, unprecedented levels of migration, global resource-driven conflict, and of course the deterioration and loss of a great deal of the natural world that so many of us love and cherish. And all of this for greed and personal gain. Of course, it is the poor and the marginalised that will suffer the most, in this country and others, but no one will be left alone by it.

Extinction Rebellion does not hold individuals responsible for the decisions they make, as consumers in a broken system. It is up to government to find solutions for a safe and sustainable future, not individuals. But I do hold everyone responsible for how they chose to use their power as members of this democracy. It is our responsibility to speak on behalf of those who cannot, because they have been lied to and are unaware of the problems they face, because they must work all hours and don’t have time to think let alone act on these issues, or because they have been born into a country in the Global South where, because of the colonial project and the sacrificial nature of our version of capitalism, their lives are considered disposable by us.

I am not talking about future generations, people are suffering and dying now. In droughts in Kenya, the fires in the Amazon rainforest, devastating sea level rises in the Maldives, the hurricane which tore through the Bahamas last month, and of course the heatwaves that proved fatal to many across Europe this summer, to name a scarce few. And if we keep silent and do not act then we are complicit in their deaths.

I deeply respect the laws of this country and believe that they exist to protect people. But the government is failing to act to do the same. It is wilfully endangering the lives of its citizens and those of the rest of the world. I chose to break the law, along with over 4,000 others this year and counting, because I believed it would make a difference. Civil disobedience has a nobel history, championed by Ghandi and Mandela, the suffragettes and the Civil Rights Movement. There is, in fact, a clause in the law that makes allowance for the breaking of it in order to prevent a greater evil, the grounds of necessity.

I am grateful to the police who arrested me, and to this court for prosecuting me. Our protest would not mean half so much without you, although I am sad that I will carry a criminal record for the rest of my life – it is not what I would ever have imagined for myself.

I think what we achieved together was remarkable, the declaring of the Climate Emergency, the rapid change in the conversation on climate change in the mainstream media, the tabling of far more ambitious carbon targets by the Green and Labour Parties, and the empowerment of so many who may not have otherwise become active and involved. And I firmly believe that this could not have been achieved without the level of illegal disruption that we caused.

So I am proud of my actions and the actions of others, and I hope that one day we will be praised for them. I just hope that it is in joy and relief that we acted when we did, not in grief for the suffering that ensued because it was not enough.

In spite of all the fear and doubt and sadness, we are lucky to have been born into the most important 50 years of human history. This is where we get to decide what we’re made of, to fight for everything that we love. We have an opportunity to build a better and more just world that respects life and shares resources evenly and sustainably. I believe in a better future and I will continue to fight for it. I hope you will join me.