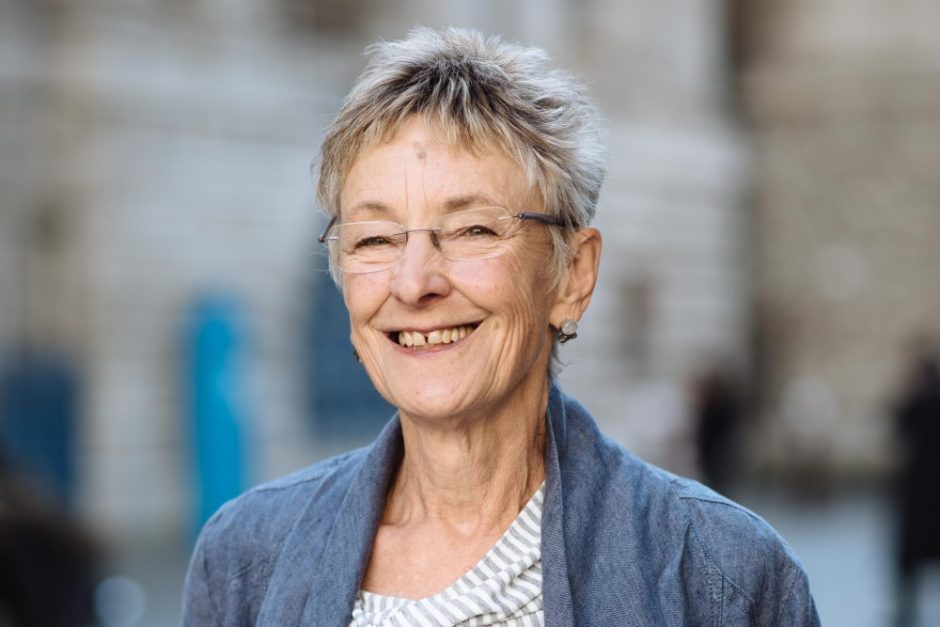 Mary was arrested on April 17th 2019 on Waterloo Bridge under Section 14 of the Public Order Act. She pleaded guilty at City of London Magistrates’ Court on 20th September that year. After hearing her statement, and those of others who appeared before her, the judge said he felt “humbled” by what he’d heard. She was nonetheless found guilty, given a six month conditional discharge and the standard £105 court costs.

“I welcome this opportunity to make a statement today. I was here a month ago and heard my husband, Dr Sargood, deliver his, which was entered into the Court record. I trust I can build on his scientifically based testimony. I very much share the fears he described and worry about the short time we have to address the problems he referred to.

My own background is in psychotherapy, systemic family therapy and the treatment of trauma. The psychological barriers which keep families or trauma victims immobilised in distress have also been evident in humanity’s inability to tackle the climate and ecological crises now staring us in the face, but emerging with increasing clarity since the 1970s.

George Marshall, in his fascinating book “Don’t Even Think about It: Why Our Brains are Wired to Ignore Climate Change”, pulls together the research of psychologists like Daniel Kahneman (who won a Nobel prize for his work on decision making) to demonstrate that the human brain is both by design and evolutionary process extremely poor at decisions involving remote, abstract, unprecedented, and uncertain threats.

Part of the reason is that what Kahneman calls “the slow brain” deals with rational problem solving, with understanding complex facts, with figures, with graphs. It is brilliantly efficient at doing this but as the name suggests it takes time and also work. “The fast brain” relies on instinct and emotions.

Ideally, the two work in conjunction to complement one another. But where there is a conflict with social or traditional norms, or where the subject is intrinsically disturbing or seems too difficult, the instinctive response overrides the rational.

In families, even where their distress presents in a direct, tangible form, there is likely to be enormous resistance to contemplating changing the way they have always done things. In addition, social conditioning developed throughout human history pushes us all not to break certain taboos, and keeps us in a lonely silence unless we can be sure of a positive reception. The mass part of Extinction Rebellion’s tactic of mass civil disobedience is an important challenge to this social taboo and has already enabled a shift in media and local government willingness to discuss the crisis.

My work as a therapist often involved facilitating the articulation and sharing of what had previously been unspoken and unheard. Once the complex web of unacknowledged family history, associated emotions and misunderstandings was allowed to emerge, to be faced and tolerated, both parts of the brain could be engaged. Instead of operating to distance and shut down rational thought, the emotional brain could provide the creativity to produce more helpful explanations and narratives. This of course had to come from my patients themselves. Lecturing them never helped; even good advice, almost never.

Narratives are vital for humans. We all have stories we tell and are told about ourselves. Some are simply entertaining. Some are constraining, many of those are built around shame and fear. These keep families stuck and trauma victims frozen. The best loved stories in folktale and myth are liberating, maybe involving triumph over fear. They have the power to engage the emotional brain, they invite creativity, new ideas even, about subjects we would normally prefer not to consider. They are woven into the therapeutic endeavour.

Extinction Rebellion’s uniqueness lies in its understanding of the need for a joint appeal to the slow and the fast brain, and an appeal with the potential to engage everyone. The Climate and Ecological Crisis is too big to belong to scientifically well informed environmentalists. Whilst insisting that we all listen to scientists and face the truth, however painful, Extinction Rebellion is determined to make emotional connections that are positive: to tell a dramatic, classic story of ordinary people coming together to stand up to and defeat an apparently indomitable foe in circumstances of unprecedented threat; to allow ordinary people to contribute to this story; to do so with wit, passion, with dramatic events enlivened with visuals, with music, with song and with good humour.

How might this make a difference? The majority of people now have enough knowledge about Global Heating and at least some knowledge about the likely catastrophic consequences. However, as long as they feel alienated, unable to make any significant difference they are hardly likely to want to hear more and will want to cut off from thinking about it. Agency, as opposed to powerlessness and alienation, is another key factor. Extinction Rebellion is reaching out to all with the claim that we can all be actors insisting on a systemic change of direction. Action, particularly determinedly non-violent action, is not only empowering it is also healing. Again, there are parallels with recovery from trauma. Today, teenagers and young people are the lead actors. They need an ever increasing supporting cast and sustained coverage. We can all help with that.

I have attempted a brief summary of some of my personal reasons for being a member of XR. I spoke to a bright, confident young woman recently. I had known her for some time through friends but we had never discussed Climate Change. She had heard that this Court Hearing was coming up and I told her I was thinking about my statement. She surprised me by saying, “You should say that we all want you to be our representative in Court. We can’t do what you are doing because we are already juggling the care of small children with our work and our careers”. She then added in a lower voice, “but I’m scared”. And in a lower voice still, “I’m scared for my boys”.

I’m pleading guilty today to contravening a Section 14 order. I would be much more guilty if I had avoided the chance to represent her, to be a tiny part of the amplification of the voices of ordinary people like her.

Thank you for giving me the chance to make this statement.”