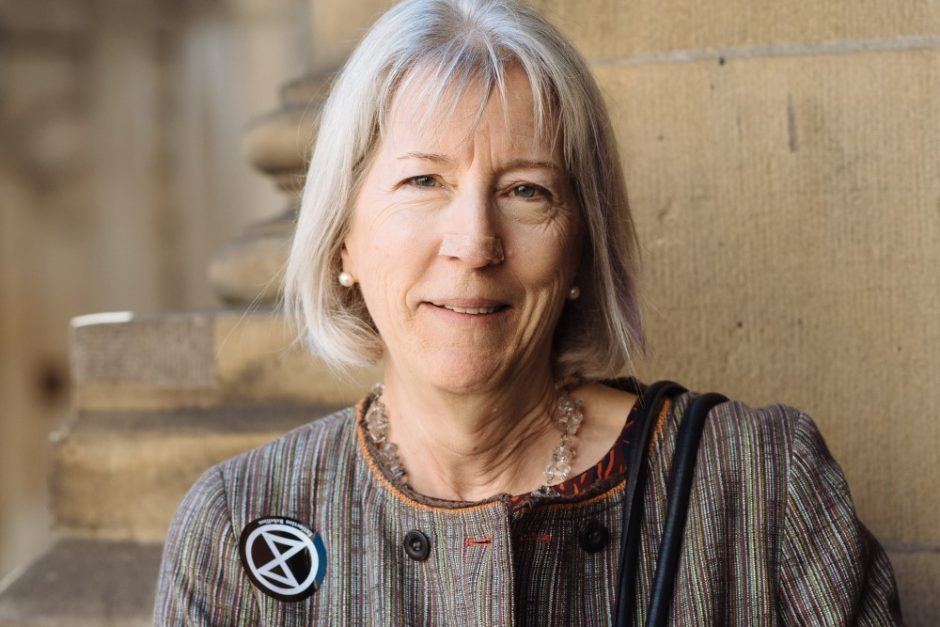 Doro, who is also a grandmother of five and member of the Camden XR Samba Band, was arrested on Easter Sunday in Parliament Square during the April Rebellion in 2019. She was tried in December 2019 and received a conditional discharge and £300 court costs.

“The realisation that there is a climate emergency comes in waves, and it comes more and more.

I organised a “Heading for Extinction Talk” in our local library, part of that talk was about rebelling, and part of that was about being arrested, so I was pretty sure I would be arrested at one point. And then we did the the NVDA, (Non-Violent Direct Training) in March. My friend Sarah and I were both on it and agreed we would both get arrested.

Both of us are older respectable people and when I tell people I was arrested – I can see the shock on their faces – it is a way of really showing how very strong my convictions are.

It was Easter Sunday, we had been in parliament square the day before as we’d been helping in the kitchen, but when we arrived the next day the police had already started to dismantle the kitchen and the tents. The police were obviously moving into the blockades, so we went and sat down in one of the places where people were chained together – to make it longer for the police to get to them – and that’s when we were picked up. I have five grandchildren and when I got carried off I said to the tourists who were taking photos that I was doing this for my grandchildren.

I feel frightened when I think about the climate emergency, I am frightened for my children and grandchildren.

Even in my lifetime it is going to make a big difference. It is scary, it’s very scary. We need to rebel because this government is not doing anything, they are business as usual. I’ve watched a lot of parliament recently and nobody has mentioned climate change. Humans just need to realise they are part of the ecosystem they are not above it – they have to be part of it.”

Doro’s story was covered in the Camden New Journal http://camdennewjournal.com/article/grandmother-how-i-found-myself-locked-up-by-fighting-to-stop-climate-change and the Guardian https://www.theguardian.com/environment/2019/sep/30/time-is-running-out-xr-activists-on-why-they-risked-arrest