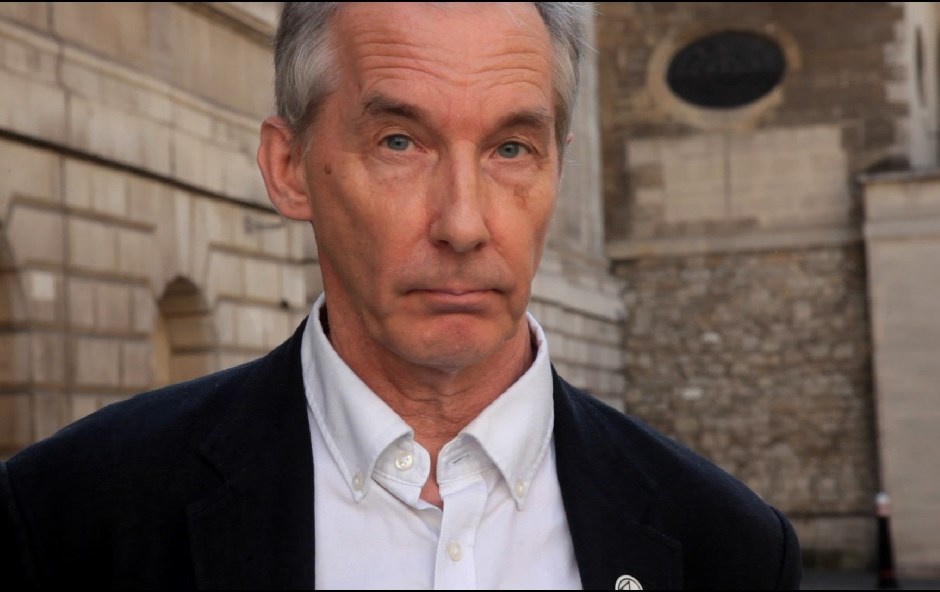 Tom pleaded not guilty after being arrested during the April Rebellion 2019 and charged with a Section 14 offence. He was tried at City of London Magistrates’ Court on 7th January 2020 where he self-represented, arguing the Necessity defence. Although he was found guilty and given a nine month conditional discharge and £200 court costs, the judge said he had made a compelling case.

“First of all, I would like to thank the arresting officers for their consideration and courtesy during the arrest.

I have never been an activist. I have reached the top of my profession, brought up a family and led a comfortable, law-abiding, carefree life.

When the IPCC report came out last October warning that we had only 12 years to reduce our carbon footprint to avoid an irreversible mass extinction, life could never again be carefree. I am an academic. I don’t have the luxury of ignoring the science. Climate disaster is now not a distant prospect but one that is happening right now and could see my children die in famine and war. I could never have imagined that their generation would be the one to witness the end of the world.

Indeed, I cannot look at any children without thinking of the desperate future that awaits them. As leading climate scientist James Hansen says:

“It would be immoral to leave the young with a climate system spiraling out of control.”

Our parent’s generation lived under the fear of enemy action: the existential threat today is one of inaction.

This time the threat is far greater than that of a world war. This time we, as the human race, need to take pre-emptive action to avoid the death of millions, perhaps billions. During the second world war, the government spent 50% of GDP on defence. Today’s government is spending 1% on climate mitigation.

The warnings have been reiterated many times since the first IPCC report in 1988 with increasing urgency.

We are on track for a probable 4 degrees increase in temperature. This level of warming will be cataclysmic. It will hasten the extinction of the phytoplankton that, along with the rainforests, provides the earth’s oxygen. Previous mass extinctions were partly the result of global anoxia at similar temperatures.

We face harvest failure and global famine. An 80% decline in worm population has left us with only a few centimetres of fertile topsoil.
There has been a 76% decline in flying insects: 3 quarters of food crops rely on pollination. With no worms and no pollination, we starve.

We face the spread of disease. Already, insect-borne diseases such as Malaria are migrating to temperate regions. As the world heats up, West Nile disease is now endemic in Canada. Candida Auris, a deadly drug resistant fungus, is spreading.

But this is not just an imminent eventuality. Kofi Annan’s Global Humanitarian Forum warns that 300,000 a year are dying now and that death rate will continue to rise inexorably. It projects that increasingly severe heatwaves, floods, storms and forest fires will be responsible for as many as 500,000 deaths a year by 2030.

“Climate change is a reality that now affects every region of the world. The human implications of currently projected levels of global heating are catastrophic.”

Adding that the world has never seen a threat to human rights on this scale, the UN human rights chief highlighted that now no country, institution or policymaker can stand on the side-lines. “The economies of all nations; the institutional, political, social and cultural fabric of every state, and the rights of all your people – and future generations – will be impacted.

Reasoning with politicians has failed us. Referring to climate change as an ’emergency’, UN Secretary General, António Guterres, warns that we are “losing the race”. He is calling for public pressure to compel governments to honour the 2015 Paris Agreement.

When all avenues of petition are closed; when the BBC under the stewardship of the government redacts every mention of existential threat from successive IPCC reports; when leading scientific reports are censored by the US government and scientists dismissed for ‘heresy’; when desperate children are condescendingly dismissed and told go back to school; when a debate on climate emergency before April could only rouse a dozen MPs, where next could we have gone?

This is why I became a signatory of the Earth Protectors Trust and came to the conclusion that non-violent direct action was the only recourse left to us to spread this vital warning. George Bernard Shaw posited that:

Already over 300000 people die every year from climate and ecological breakdown.

The existential tipping point, where mass extinction escalates and cannot be stopped, is imminent. As Hans Joachim Schellnhuber, founder and now Director Emeritus of the Potsdam Climate Institute, warns:

“The climate math is brutally clear: While the world can’t be healed within the next few years, it may be fatally wounded [if] neglected until 2020. The sense that the end of next year is the last chance saloon for climate change is becoming clearer all the time ”

“I am firmly of the view that the next 18 months will decide our ability to keep climate change to survivable levels and to restore nature to the equilibrium we need for our survival.”

This is why my defence is one of ‘Necessity’.

But there is no rescuing my children from a burning house once the fire is out of control.

To suggest that ‘necessity’ requires that the threat is immediate is like suggesting to the captain of the Titanic that the iceberg is not the problem but the lack of lifeboats the next day.

As the Greeks had it, speaking truth to power is a moral imperative. Parliament’s declaration of climate emergency is, without doubt, the result of a recognition that we are right about the threat: a peer reviewed, unassailable warning by 100% of scientists across the world not in the pay of the fossil fuel industry. However, since that declaration, nothing has been done to halt the exponential rise in our carbon footprint.

While everyone from Rowan Williams, to the editor of the Lancet calls for Direct action as a last resort in defence of humanity in the face of political intransigence, I call on the judiciary to join the rest of us on the right side of history.

You have children too.”

“Last October, I woke up one fine morning, switched on the radio, and heard that we had 12 years left. I had led a carefree life up until then, but the idea of being carefree was no longer a thing. I suddenly had images of my children’s generation being one that will witness the end of the world. I spent the week wondering why no one was discussing this on the news or in the newspapers.

I have never been an activist and I’d usually just stay on the sidelines, but when the swarm happened, I swarmed as well, and I have never felt more right, in my life.