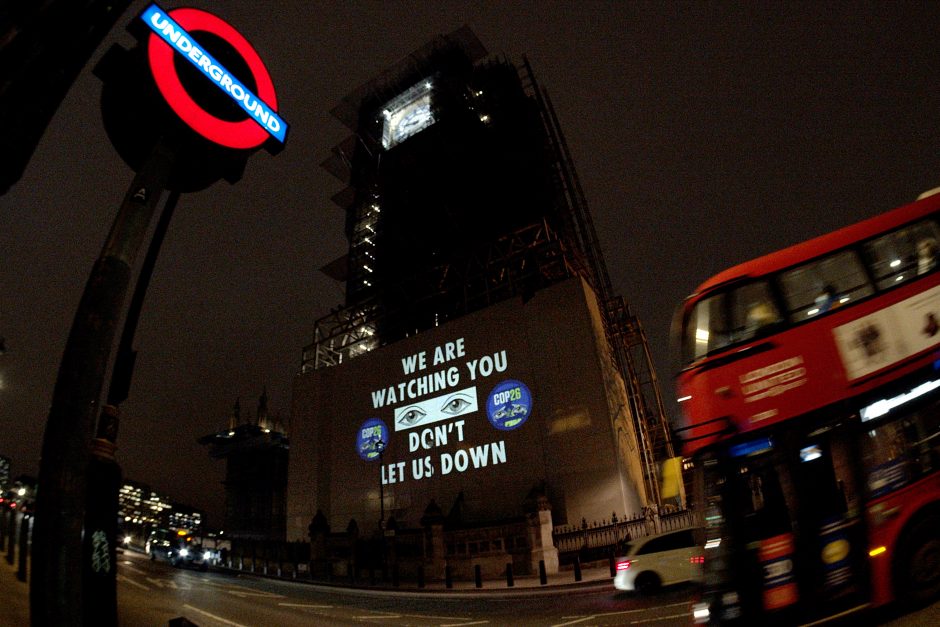 On the 5th anniversary of the signing of the Paris Climate Agreement, Extinction Rebellion groups around the world have come together to launch ‘COP26: We Are Watching You,’ a series of global synchronised projections with a warning to World leaders as the countdown to COP26 in Glasgow next year begins.

On the eve of the anniversary, a video was projected in 14 cities across the globe – including Paris, Glasgow, Washington, Buenos Aires, Mumbai and London – as a display of global strength and solidarity.[1] The message, although a warning to those in power, hopes to express the deeply interconnected nature of the climate and ecological crisis, and encourage more people to take a stand to hold their governments to account. The project was developed by 20 countries, some of them already deeply affected by climate change.[2]

Subzi Tan from Extinction Rebellion’s Asian Rebellion group, said: “This cannot be like the previous COPs. The stakes are higher and we can see already the direct repercussions of not taking the necessary steps. We can’t afford to just ‘talk’ while civilizations crumble in the Global South.”

Projections were shown on landmarks including the Scottish Event Campus in Glasgow where COP26 will be held, the Washington Building near the Capitol in Washington DC, Big Ben in London and the Obelisco in Argentina.

Although many around the world now consider the COP process deeply flawed and keeping within 1.5 degrees of warming as looking less and less achievable due to years of empty promises and no action, many in the Global South know that continuing to fight for 1.5 degrees is a matter of life or death.[3][4]

Ina-Maria Shikong, co-ordinator of the Extinction Rebellion Okavango Delta projection stated: “COP26 is not about who is making the most money. This is about who is surviving and who is not. Your borders are shutting down, and yet your companies are coming to cause devastation on our side of the planet in search of fossil fuels. COP26 is a matter of survival. The blood will be on your hands.”

Countries hosting the COP summit continue to be bankrolled by big polluters, despite years of work from activists around the world.[5] With all eyes on the host nation, it has already been revealed that the UK Government has held private talks with fossil fuel terms hoping to gain access to COP26 next year.[6]

This comes as a group of young people with family in Africa, the Caribbean and South America – along with the Stop the Maangamizi Campaign and climate litigation charity Plan B – launch legal action against the UK Government for its continued financing of the climate crisis and its failure to develop a plan to tackle it. Donate to their Crowd Funder here.

Hear from ‘Young People vs UK Government’ in the latest Extinction Rebellion Podcast.