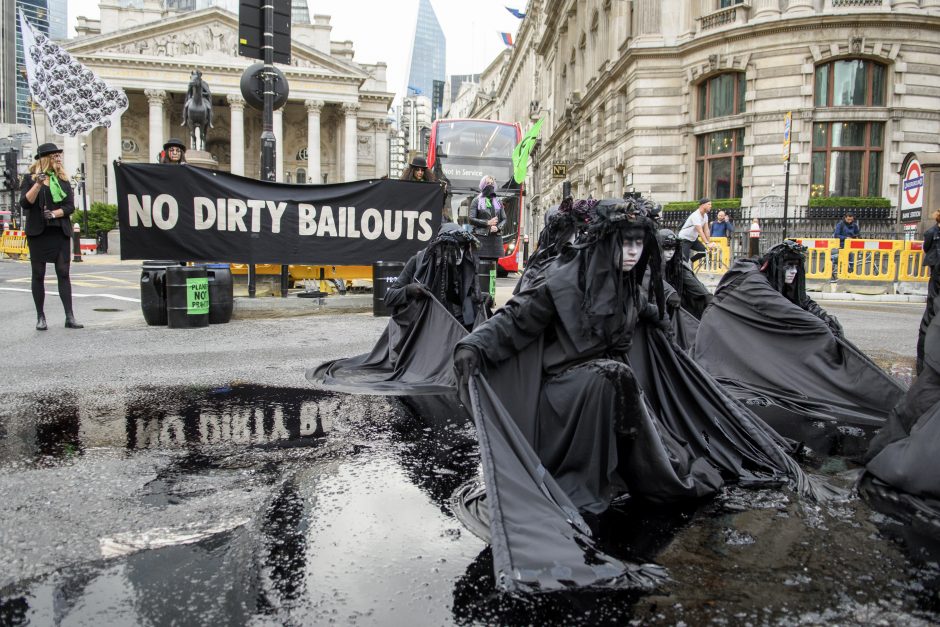 Today, Extinction Rebellion launches Money Rebellion, [2] a new campaign using financial disobedience to expose the UK’s suicidal economic and financial system. Over the coming months, citizens will be redistributing debt owed to unethical banks as ‘donations’ to support those on the frontlines of environmental ruin.

As well as traditional street protests, there are guides to help people move to ethical banks, [3] stickering groups defacing [4] unethical banks, [5] and coordinated digital campaigns [6] citizens can take part in from home. There is a growing group of small businesses who are pledging to divert a portion of their tax to invest in green, sustainable business models and initiatives.

Rod Hart, now retired from his East Anglian plumbing, heating, & electrical business, believes, “We need a healthy financial sector which balances growth and trade. Small businesses are trampled on, despite their role as the lifeblood of the economy. Taxes are being used to maintain a business-as-usual economy, plundering the planet and destroying the future for all. It’s time for small businesses to join together and recognise their potential in the push for positive change.”

The collective influence of the UK’s 5.9 million small businesses is vastly underrated, considering they comprised 99.3% of the total business population and 52% of private sector business turnover in 2019. [7] By continuing to fund climate destruction, our government [8] and banks [9] have demonstrated they cannot be trusted with our money, leaving monetary defiance as the only option. Even in the midst of a global pandemic, bailing out fossil fuel industries is a higher priority than protecting ordinary citizens. [10]

Last Wednesday, the Government released its inadequate [11] ‘10 Point Plan’ for their Green Industrial Revolution. The plan commits a dismal £4bn of additional money, which is less than 1/42nd of HS2 projected spending [12] and a sixth of the £24.1bn increase [13] in the four-year defence budget announced the very next day. This news brings the yearly defence budget to an average +£47.5bn/ year [14] until 2025, or nearly 12x new funds in the ‘10 Point Plan’. Clearly, the UK Government places little importance on the climate crisis, between proposing such a criminally negligent plan the same year it named Alok Sharma (Secretary of State for Business, Energy, & Industrial Strategy) President for COP26 [15], a UN climate conference the UK will host in 2021.

In light of this, Dr. Gail Bradbrook, Extinction Rebellion co-founder, said: “We need a grown-up conversation about why our political economy is killing life on earth. We want people from all walks of life to work with experts to redesign our economy through legally-binding assemblies. This economic system needs us to survive – but if it’s willing to trade our lives and planet in the name of short-term gain, then we don’t need it.

“There is nothing magical about reducing carbon dioxide in the atmosphere. We just don’t have the political or economic will to do this,” Professor Stephan Harrison, [16] Professor of Climate and Environmental Change at University of Exeter, said recently. Money Rebellion aims to address this lack of political and economic will. (For the avoidance of doubt, quoting Prof Harrison does not imply his support of our campaign).

People can find out more about Money Rebellion here [17] and how they can get involved.