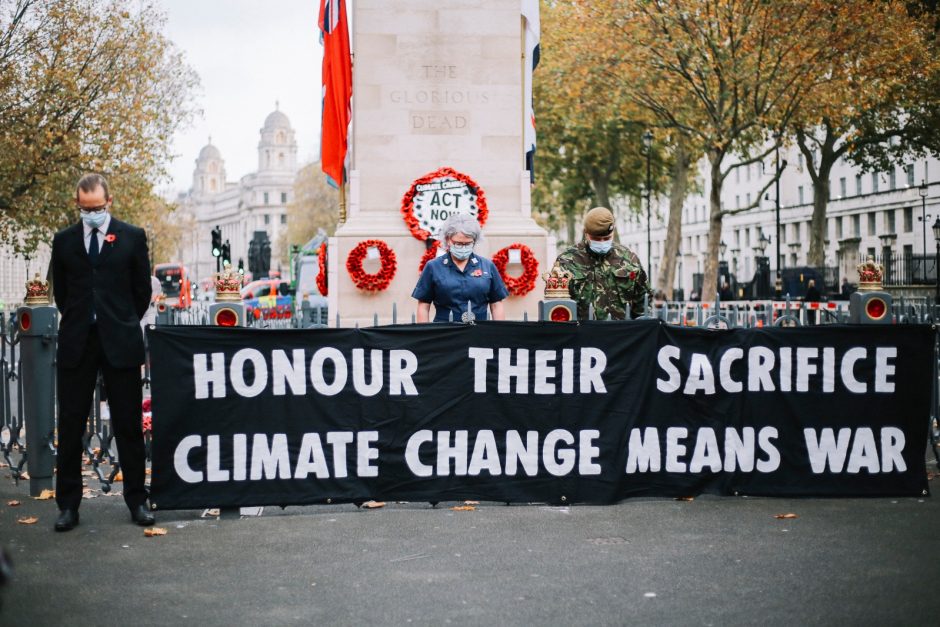 Today at 8am, on Remembrance Day 2020, Extinction Rebellion hung a banner at the Cenotaph reading ‘Honour Their Sacrifice, Climate Change Means War’. After the banner was hung at the war memorial, British Army veteran and member of Extinction Rebellion, Donald Bell, paid his respects and observed two minutes silence. He then hung a wreath of poppies decorated with the words ‘climate change means war, act now’ on the Cenotaph.

The action aims to highlight the connection between rising global temperatures and an increase in the incidence of conflict and war. Research commissioned by the Ministry of Defence published in June this year points to a “growing recognition that climate change may aggravate existing threats to international peace and security.” [1]

The report, which is titled ‘A changing climate: Exploring the implications of climate change for UK defence and security’, advises the Ministry of Defence on how to prepare the British Armed Forces for the effects of escalating climate change, including increased unrest and conflict resulting from shrinking food and water resources and the displacement of peoples. The report recommends that the Ministry of Defence alter the design of war games and strategic training exercises to account for “multiple simultaneous large-scale disasters” resulting from climate change, and to “support interoperability across the Armed Forces, emergency services, police, fire services and coastguard.”

The action today calls on the government to act to avert the increase in unrest, conflict and war anticipated by the Ministry of Defence report. The Committee on Climate Change – which advises the government on emissions reduction and reports on their progress – revealed in June this year that the government had reached only two of it’s 31 milestones and was on track with only four of the 21 indicators identified on the path to zero emissions. [2] The action makes the point that, in this context, speaking up about consequences of unchecked warming is an act of remembrance.

British Armed Forces veteran and member of Extinction Rebellion, Donald Bell, 64, said: “I took action today knowing that I would be criticised. I knew that I would be accused of being disrespectful and hated by many for speaking out in this way. Remembrance Day is never an easy time for veterans and this was not an easy decision for me to make.

“But I served this country, I served the people of this country and the action I took today is about just that. Unchecked climate change means a return to a world at war. I cannot stand by and let that happen. It is my duty to act.

“This government’s own climate advisors, the committee on climate change, said last year that they have a ‘Dad’s Army’ approach to protecting British people from the impacts of climate change. Their report in June this year showed that the government has failed to meet all but two of the 31 milestones it set itself for reducing emissions. This government is criminally negligent and young people today will pay the price for their failure.

“I did four tours in Northern Ireland. I have been in conflict. I saw good friends – my comrades, who I served with – die. Many of the people who attend the Remembrance Day Service have never seen the horrors of war. I hope they never have to.

“However you feel about the action today, I want people to take this message – if we don’t deal with this climate emergency, now, it will lead to war.”

[1] A changing climate: Exploring the implications of climate change for UK defence and security: https://assets.publishing.service.gov.uk/government/uploads/system/uploads/attachment_data/file/930787/dcdc_report_changing_climate_gsp_RR-A487.pdf