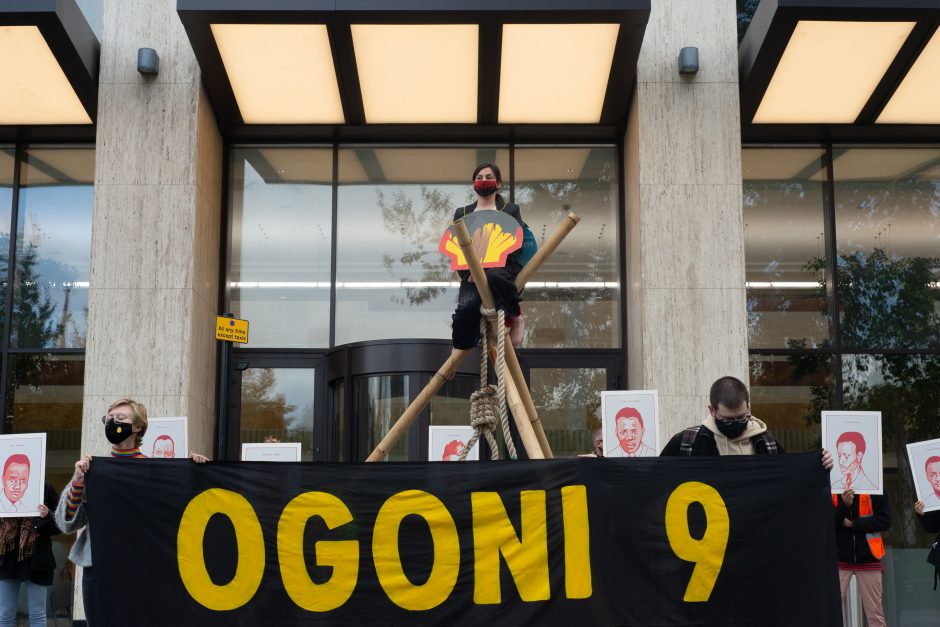 Today marks the 25th anniversary of the murder of author, Ken Saro-Wiwa and the Ogoni 9, killed in the Nigeria in 1995. Saro-Wiwa, leader of the Movement for the Survival of the Ogoni People (MOSOP) and fellow activists were arrested and executed for peacefully protesting against the destruction caused by Royal Dutch Shell in the Ogoniland region.[1]

Outside Shell HQ on London’s Southbank this morning, Extinction Rebellion held an action in solidarity with those lost, sending a message to the oil titan that their actions must not be forgotten. A small group erected a protest tripod at the building’s entrance where a single person dressed as a Shell executive sat on top. A noose was hung from the tripod and had oil poured down it to symbolise the brutality of the murders.

Their message was clear: Shell = Guilty.

Despite persistent court orders, Shell to this day has still not cleaned up the vast amounts of oil spilled in Ogoniland, nearly three decades ago, and the area remains in crisis.[2]

Lazarus Tamana, President of the Movement for the Survival of the Ogoni People in Nigeria, said: “Twenty five years ago, we woke up to witness the greatest crime against humanity, the hanging of the Ogoni 9 by the Nigerian government and Shell. Our suffering has not stopped, pollution has increased. The clean up exercise is not happening, yet Shell is planning to return back to Ogoniland for more oil exploration. We are ready to resist any encroachment by Shell in Ogoniland.”

In 1995 Shell was complicit in the court case that resulted in the execution of these 9 activists who led a peaceful campaign against Shell’s exploitation of their region. Shell has been accused of bribing and coaching witnesses, as well as providing false evidence during the case.[3]

It wasn’t until last year that the families of the Ogoni 9, in search of justice, were given the opportunity to have their case heard by a Dutch court. The case is ongoing in The Hague.[4]

Shell has been extracting oil reserves under the wetlands of the Niger Delta for decades, causing oil spills, gas leaks, and land, water, and air pollution on an enormous scale. The Niger Delta is now one of the most polluted places on Earth, and the United Nations Environment Programme has said it could take up to 30 years to clean up the pollution that Shell and other oil companies have caused. MOSOP has vowed to the Federal Government of Nigeria that there will be no more oil exploration in Ogoniland until Ken Saro-Wiwa and fellow activists are exonerated.[5]

Esther Stanford-Xosei, Extinction Rebellion Internationalist Solidarity Network, said: “On the 25th anniversary of the murder of Ken Saro Wiwa, it is a fitting tribute that we in the UK do all we can to ensure that the British Government and corporations stop their criminal complicity in the still ongoing Maangamizi crimes of Genocide and Ecocide within and beyond Nigeria.

“One tangible step forward, is to support the growing popular demand for the reparatory justice measure of the decriminalization and complete exoneration of the martyred Ken-Saro Wiwa and others of the Ogoni 9, as being amplified by the Movement for the Survival of the Ogoni People (MOSOP) and the growing coalition of West African progressive forces that are embarking, with their Operation WAHALANUSE which is championing the agenda for a Pan-African Green Economy Transformation Action Programme.”

Throughout its history in Nigeria, Shell worked closely with the Nigerian government, which in the past few months, has been under domestic and international pressure for brutalising its own citizens using the special military squad, the Special Anti-Robbery Squad (SARS). The young activists behind the #EndSARS campaign to end police brutality in Nigeria has now gained traction globally.[6]

The group in London are calling for Shell to pay reparations to the Ogoni people, and for the UK Government to exclude Shell from all climate negotiations and policy making processes. They also demand a ban on government lobbying by fossil fuel companies, tax breaks for oil and gas, and for the exclusion of fossil fuel investments from Covid-19 recovery plans.

One person was arrested at the scene outside Shell HQ.