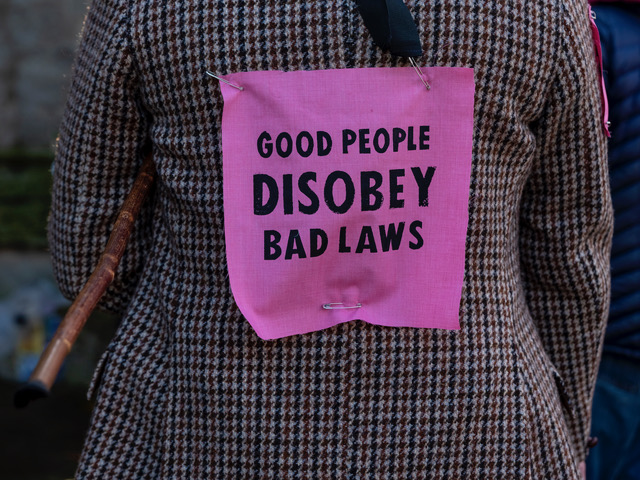 Dear Sir David Attenborough – We all have a part to play

The letter hopes to communicate the significance of nonviolent civil disobedience and its impact throughout history.

Along with the letter, the group delivered some gifts, including an olive tree adorned with photos of earth-defenders around the world who, because of their efforts to protect their communities and their habitats, have been murdered by governments and corporations. They also left him an “NVDA starter pack” containing information about nonviolent civil disobedience, a copy of ‘This Is Not A Drill’, and a banner with a quote from Sir David Attenborough, saying “We cannot be radical enough when dealing with climate change.”

Cathy Eastburn, mother of two, from London said: “On Sunday morning a small group of mums, young women and an ex-serviceman delivered a letter to Sir David Attenborough. We hoped to extend an olive branch by delivering gifts and opening a conversation about how change can happen in order to mitigate the worst impacts of the climate and ecological crises. We went with the message that we are all on the same side and we hope that our gifts will help show that we can all be part of the change we need to see even though our methods may differ.”

The full letter can be read below:

We hope you are faring well during these turbulent times. There’s no need to stray far from our front doors these days to know that our world is unravelling in front of us.

But sometimes our doorsteps can bring words of friendship also. So, here we are.

We are a group of Extinction Rebellion (XR) activists and we bring you this letter to ask for your help.

For decades we have enjoyed your films and TV programmes. We share your deep concern for the living planet and the need you have expressed for immediate and decisive action to tackle the climate and ecological emergency. Many of us in XR have spoken recently about the similarities in your use of language in your films “A Life On Our Planet” and “Extinction: The Facts” with our own ‘Extinction Talk’, on which Extinction Rebellion was founded.

I’m sure you would agree that now, more than ever, we need new ideas, new courage, new ways of thinking about how to create the change we so desperately need.

Nonviolent civil disobedience has a long history of bringing about swift, transformational change. Breaking the law was integral to the achievements of the Suffragettes, Gandhi’s Salt Marchers, the Civil Rights movement and the Polish and East German democracy movement, to name only a few.

All who stood were scorned by society during their time, the majority of them mischaracterized as extremists and aggressors (and worse!). But stand they did, and the world is better for their sacrifice. We owe our freedoms to the courage of those who broke the law and risked their lives and freedoms before us.

You yourself have said “We cannot be radical enough when dealing with climate change”. But your recent comments to the BBC, where you said “you have to be careful that you don’t break the law” and that Extinction Rebellion should question whether their actions are “political and sensible,” suggest you believe otherwise.

We urge you now to rethink this position and recognise the role nonviolent civil disobedience plays when communicating to your global audience.

With your unique position and influence, we fear your comments are contributing to the erasure of the voices and sacrifices of front-line earth protectors around the world. The UN’s Special Rapporteur for Indigenous Peoples estimates that Indigenous peoples are protecting 80% of the world’s biodiversity. They know they have no choice but to break the law and take action to protect their communities, habitats and the biodiversity that sustains all life. They face violence, arrest, imprisonment, physical mutilation and murder on a daily basis. Much of this violence is sanctioned by governments who are at the heel of corporate power. Global Witness reports that 2019 was the deadliest year on record for environmental defenders. At least 212 were killed protecting land and water from mining, agribusiness and fossil fuel interests. That is over four environmentalists murdered every week.

For our part, Extinction Rebellion and the School Strikers created the space in 2019 for the climate and ecological emergency to reach the height of global awareness. Extinction Rebellion were voted the no.1 worldwide educator/influencer on climate change at COP25. Following our April Rebellion in 2019, the UK Parliament became the first in the world to declare a climate emergency.

This was achieved because many thousands of ordinary people risked arrest for this cause.

We are not hooligans or extremists here out of a joy for breaking the law. We are mothers afraid for our children’s future. We are doctors and nurses who recognise the interconnected health and climate crises. We are young people sick and tired of being sold false promises. We are teachers, bus drivers, office workers, Rabbis, priests, writers, artists, emergency workers, scientists and more. Many of us are life long campaigners who have remained within the law for decades, going on marches and signing petitions, and we have watched in dismay as the crisis has only grown worse.

Those engaged in the fight for a liveable planet – whether those just doing their part, the TV personalities, or the activists committed to nonviolent direct action (NVDA) – are a part of an ecology of change, and the relationship between us makes up one symbiosis. Not one single element of these will succeed independently, but together we can create one united revolutionary moment. Nor will simply urging people to make incremental changes to their daily lives be enough now (although, of course we encourage them when possible!). It is crucial that governments are held to account for continuing their ecocidal activity and propping up destructive industries that are killing us.

We are so grateful for the part you are playing in the struggle to protect life on Earth, and ask you to work with us, not against us, and recognise that we all have a role to play in the times to come.

We are hand-delivering this letter to you in the hope of reaching you directly. We have brought the gift of an NVDA ‘Starter Pack’  that contains everything a person needs to understand how to engage in civil disobedience with XR. We hope you find value in this.

You will also find with it an olive tree representing peace, adorned with photos of environmentalists who have been killed by governments around the world for protecting precious habitats.

We have included our names, addresses and an email address below should you wish to respond. We would love to speak with you further about the above and begin a vital conversation about how we can achieve change during these dark times, when all ideas promoting peace and justice must be on the table.