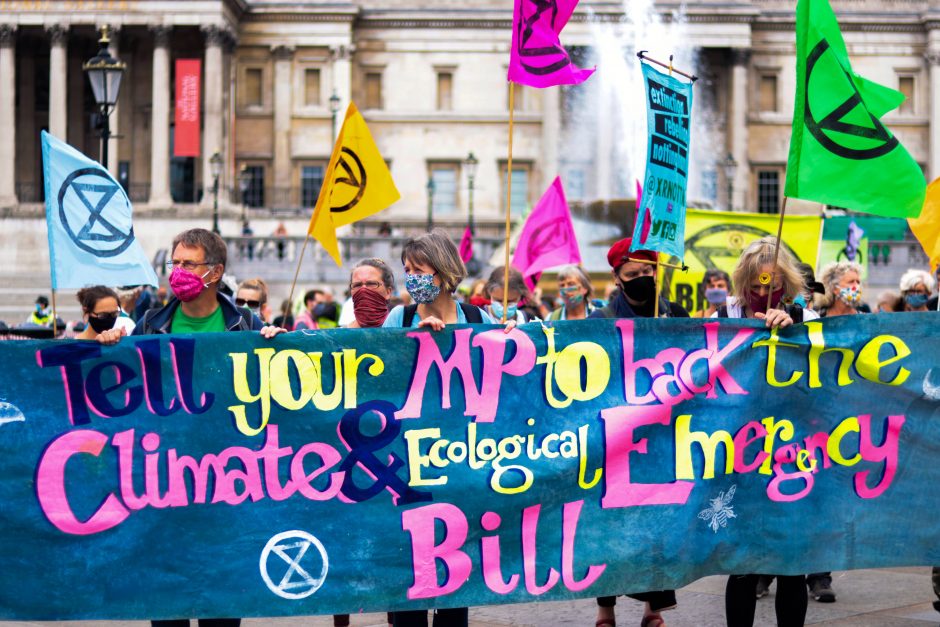 What a spectacular Rebellion we had. Huge congratulations to rebels for the amazing actions and for the solidarity that was shown, we are privileged and inspired to share this movement with you.

One area that was a particular success was the launch of the campaign for the Climate and Ecological Emergency Bill, birthed by XR, developed by an alliance along with some of the country’s leading scientists, including a lead author for IPCC A6. *

Tabled by Caroline Lucas as a Presentation Bill on Sept 2nd, by the end of Rebellion the Bill had over 60 MPs supporting, with the number now at 75. All parties bar the Conservatives are represented, even the DUP.

Plaid Cymru and the Liberal Democrats support the Bill at party level, which is to say that it would be included in their manifestos were a General Election to be called.

A Labour frontbencher risked losing the party whip to co sponsor the Bill (Alex Sobel, MP for Leeds North West), high profile MPs such as Jeremy Corbyn and Rebecca Long-Bailey have tweeted and signed the Early Day Motion to support it, and several MPs posted statements on their websites about their views and support for the content of the Bill.

Combined with the media coverage (see below for a sample), these are extraordinary, virtually unheard of, results for a Private Members Bill. And they would not have been achieved without all of the action taken by rebels to publicise the Bill and lobby for it.

MPs are feeding back that because of the push from constituents, “everyone knows about it” and “everyone’s talking about it”, in the House of Commons. The pressure is already being felt, and it’s working. When we contact NGOs to discuss the Bill, the feedback is similar, they know all about it, and they want to talk to us asap.

So what now, after a bit of regen?

Keep at it! This is all about pressure. And it’s a numbers game. The more MPs support the Bill, the closer we get to it being taken forward for a vote. Ask family and friends to contact their MPs. Stay in touch with yours. Supporting the Bill is the first step, and we’re grateful for it, but we will need them to advocate for it in their own parties and with frontbenchers. Encourage them to help publicise it by tweeting, blogging or mentioning it in media appearances. Particularly helpful would be submitting Parliamentary Questions for PMQs and similar opportunities in the House.

Use social media, particularly Twitter, to help profile raising and encourage discussion. The hashtag is #CEEbill and the Twitter handle is @CEEbill_NOW

We will continue to liaise with MPs and members of the Lords, and will be working to build a formidable network of supporters from civil society and key institutions. If you are a member of or have a relationship with, a related NGO or charity, do raise the Bill where possible. Like political parties, many NGOs at the executive level will be influenced by pressure from within. We can create and maintain that pressure.

And what a difference it has made already. Last week an MP was asked what it was about the Bill that caught her attention and made her want to support. She replied, ‘ yes, this started with my constituents, but to be honest, there isn’t clear leadership or direction here on climate, and we knew it, and this Bill is a way, no the way, to get us back on track ’.

From everyone in Political Circle and the Bill Alliance teams, thank you. Our movement is showing the way.

For FAQs and to see if your MP backs the Bill, see here and/or the website at www.ceebill.uk

Why the Climate And Ecological Emergency Bill could lead to a revolution of the imagination by Rob Hopkins
If democracy looks doomed, Extinction Rebellion may have an answer, John Harris in the Guardian
The new UK Climate and Ecological Emergency Bill is exactly what we need – here’s why by Jefim Vogel in the Conversation
Climate Emergency bill offers real hope, Letter from Wera Hobhouse MP Liberal Democrat, Alex Sobel MP Labour, Ben Lake MP Plaid Cymru, Claire Hanna MP SDLP, Stephen Farry MP Alliance and Tommy Sheppard MP SNP in the Guardian
‘We can’t wait until 2050 to reach net zero’: Campaigners call for climate crisis to be enshrined in law by Sean Russell in the Independent
The world has reached decision time on the climate crisis by Bill McKibben in the New Yorker
Government ‘out of touch’ with public mood, says grassroots group behind new climate Bill Rebecca Speare-Cole in the Standard
The Climate and Ecological Emergency Bill could be our last chance to avert the accelerating crisis by Caroline Lucas in Politics Home
MPs table fresh legislation to ‘close gaps’ in UK Climate Change Act by Michael Holder in Business Green

* The CEE Bill Alliance has now become a separate entity from XR, which means XR is one member of the Alliance among others, which we hope will soon expand to many more. The Alliance will include both individuals and organisations across civil society, but with an emphasis on promoting policy expertise and solutions and where necessary using more traditional advocacy methods. (See here for a short note from one the Bill’s original architects, Sarah Lunnon).