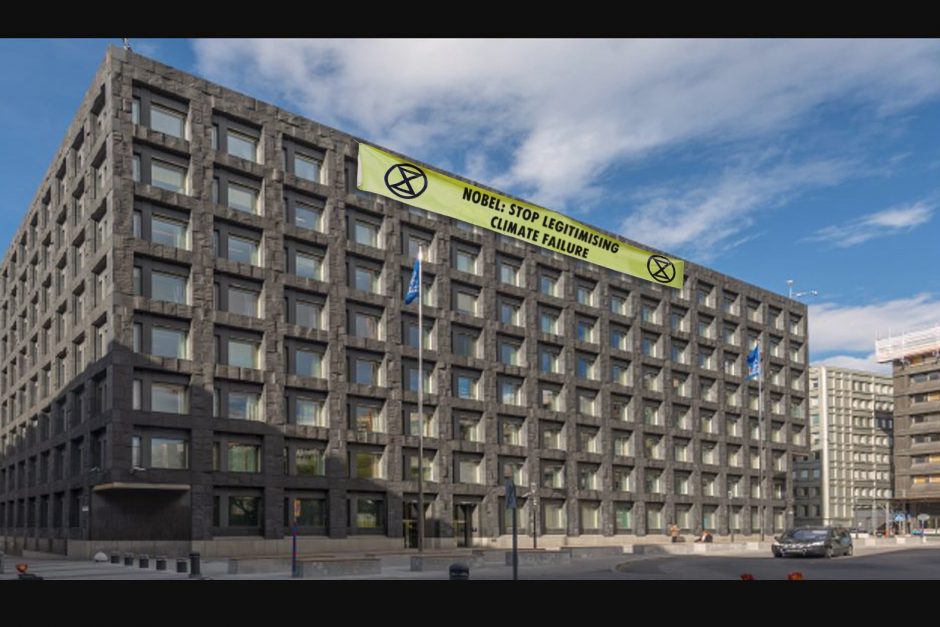 Extinction Rebellion has protested against the award of the Nobel Prize to two economists who specialise in game theory, claiming the discipline of mainstream economics is helping to destroy the planet.

The 2020 Sveriges Riksbank Prize in Economic Sciences in Memory of Alfred Nobel was awarded to Paul R. Milgrom and Robert B. Wilson for research they completed a decade ago into game theory relating to auctions.  While the world struggles with economic and ecological collapse, the ivory tower of mainstream economics continues its dangerous and complacent tradition of celebrating old white male economists who continue to ignore humanity’s greatest challenge.

All recent recipients of the Nobel Prize for Economics have either ignored the climate and ecological emergency or severely misinterpreted the science. Extinction rebellion demands more from the economics profession.

“If we are to have any hope of a liveable planet for future generations, the Nobel Committee, Sveriges Riksbank and the economics profession must take responsibility for the flawed scholarship they have lavished with their greatest prize.”

By focusing on irrelevant topics such as auctions, economists are letting the world down on climate change.  Other Nobel prize winners have even made our greatest challenge yet greater by misrepresenting science and vastly miscalculating the risk of climate change.

The 2018 prize for economics was awarded to William Nordhaus of Yale University for his work integrating climate change into macroeconomic modeling.  He claims his results show that catastrophic increase in average global temperature will only result in a trivial reduction in wealth measured by Gross Domestic Product (GDP). Yet scientists are warning us that, unless this crisis is immediately addressed, it will catapult us towards the destruction of all we hold dear, our planet’s ecosystems and the future of generations to come.[3]

Although this attempt to quantify the impact of climate change has been thoroughly demolished by other scholars, Nordhaus and colleagues continue to lead policy makers in countries such as the UK. Their influence goes beyond merely advising governments, to actually writing the economic components of the formal reports by the Intergovernmental Panel On Climate Change. These contributions are far less alarming than the evidence reported by real climate scientists so serve the interests of all those who stand to benefit from the status quo.

This means mainstream economics has become misleading and dangerous.  It is allowing governments to avoid taking meaningful action to reduce emissions and legitimising climate and ecological failure.

Extinction Rebellion demands that the Nobel committee revoke the 2018, 2019 and 2020 prizes and re-allocate them in recognition of thinkers who are supporting a just transition into a flourishing democratic society that seeks to exist within planetary limits of our biosphere. We demand that the economics profession reflects on its role in the context of climate breakdown.

We ask all to act in the service of life instead of GDP growth, before it is too late.