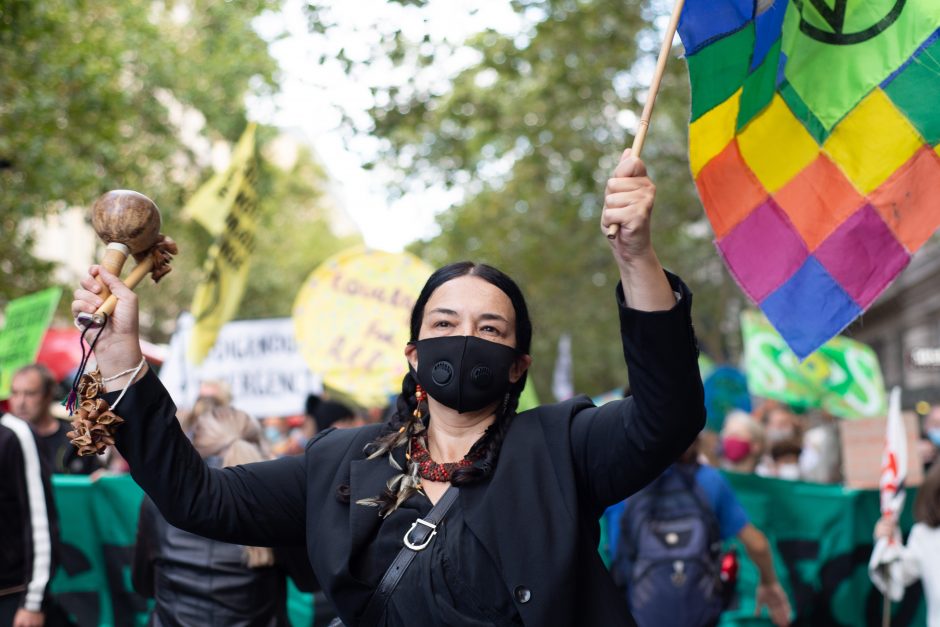 This Saturday October 10 Amazon Rebellion – with support from Extinction Rebellion groups around the world and Animal Rebellion – will gather outside the Brazilian Embassy in London from 2-5pm to say ‘Enough ecocide! Enough Genocide!’ [1]

There will be speeches from scientists, UK and Brazilian activists, as well as music performances including live Brazilian drummers, costumed dancers and a choir.

Attention will be drawn to the highstreet companies most responsible for the destruction of the Amazon rainforest, including Tesco, Sainsbury’s, McDonald’s, Burger King and Subway, and a call made for a boycott in the UK and worldwide.

Two open letters addressed to President Jair Bolsonaro will be delivered to the Embassy, one from activists in Brazil [2], and a second from the Association of Indigenous Peoples of Brazil (APIB) – a representative democratic body of indigenous peoples across Brazil. [3]

Mariana Silva, a member of Extinction Rebellion attending the protest, said: “I am taking part in this action in solidarity with the people in South America that have been affected by the fires, in particular indigenous people. It is a real catastrophe. The Amazon, the Cerrado and the Pantanal ecosystems are on fire and the brazilian government, along with many transnational companies, are complicit in the destruction. They continue to privilege profit over people. They favour cattle and soya plantations over biodiversity and indigenous cultures. As a citizen I am demanding change.”

The Amazon rainforest is critical for the stability of the Earth’s climate and ecosystems. Decades of sustained deforestation and extractivism have destroyed around 20% of the forest, and deforestation rates are currently increasing, as the Brazilian agribusiness lobby and other extractive industries, financed by international markets, seek to extend their reach.

According to a study published in Science Advances in December 2019 the Amazon is now within the danger zone of a planetary tipping point predicted by scientists to start around the 20-25% deforestation mark. [4] The rainforest is in danger of drying out and turning into a savannah, releasing billions of tonnes of CO2 into the atmosphere and precipitating climate catastrophe and according to a study in Nature Communications in March this year these ‘regime shifts’ occur faster in larger ecosystems like the Amazon Rainforest. [5]

In Brazil the incessant pressure on territories and natural resources from agribusiness and extractive industries is resulting in systematised ethnocide and ecocide in the Amazon, affecting people and countless other lifeforms. This destruction is perpetrated by companies including JBS, Cargill, Marfrig,  Minerva and Bunge, and financed by BlackRock Vanguard, State Street, and banks such as Legal & Genera, BNP Paribas, Santander, Barclays and HSBC. [6]

Indigenous communities in Brazil, who understand the forest to be sacred, are defending the Amazon against all odds for the benefit of humanity and the planet.[7] As a result, they are threatened by escalating violence and murders of environmental defenders in Brazil are among highest in the world.[8]

Soy, beef, leather and other products linked to the destruction of the Amazon enter the UK via global supply chains. These products find their way into supermarkets and fast food retailers including Tesco, Sainsbury’s, Asda, SPAR, Costco, Iceland, Morrisons, McDonald’s, Burger King, Subway, Nandos, Domino’s, Yum Brand – the parent company of Taco Bell, KFC and Pizza Hut among others.[9]

[3] Open letter from the Association of Indigenous Peoples of Brazil (APIB) to President Jair Bolsonaro: https://extinctionrebellion.uk/wp-content/uploads/2020/10/Open-letter-from-APIB-1.pdf

[6] Companies contributing to and financing the destruction of the Amazon:

We are letting banks off the hook for financing environmental destruction – that must change: https://www.independent.co.uk/news/business/comment/environmental-damage-deforestation-banks-hsbc-barclays-santander-a9167916.html

We are letting banks off the hook for financing environmental destruction – that must change: https://www.independent.co.uk/news/business/comment/environmental-damage-deforestation-banks-hsbc-barclays-santander-a9167916.html

[7] Amazon heroes who don’t give up: https://www.opendemocracy.net/en/democraciaabierta/guardians-of-the-forest-heroes-who-dont-give-up/

[9] UK Supermarkets and fast food outlets stocking products associated with the destruction of the Amazon:

Number of fires in the Amazon reached a 13-year high in June — and scientists fear they will engulf vast areas of rainforest in the coming months: https://www.dailymail.co.uk/sciencetech/article-8482701/Number-fires-Amazon-reached-13-year-high-June.html

7 reasons why meat is bad for the environment: https://www.greenpeace.org.uk/news/why-meat-is-bad-for-the-environment/