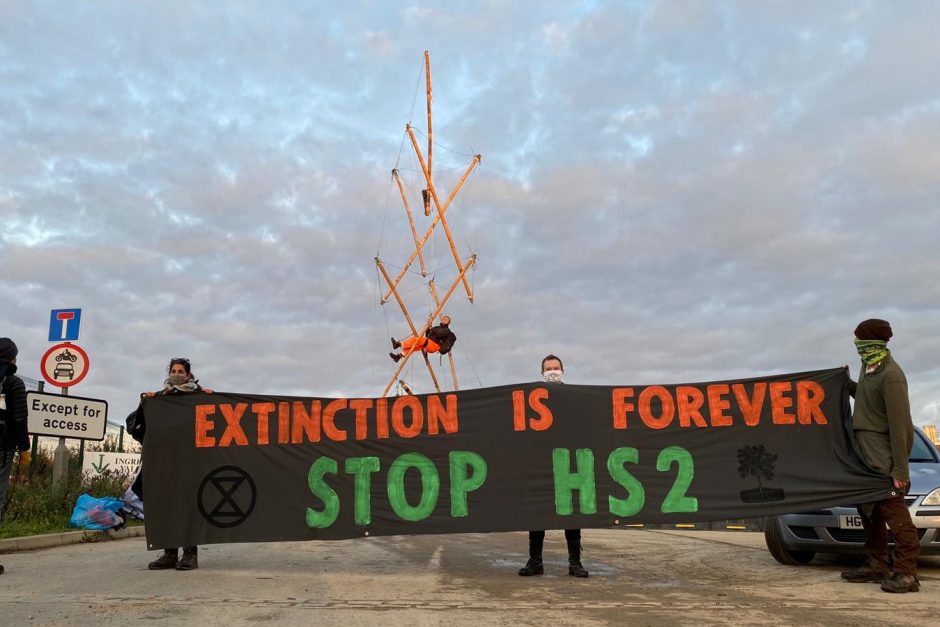 Today, Friday October 9, Extinction Rebellion and Stop HS2 have responded to the Prime Minister’s call to protect biodiversity by blocking HS2 worksites across the 140-mile stretch from London to Birmingham asking him to tell the truth and, in his own words ‘act now without dither or delay’.

Extinction Rebellion targeted the 135 acre tunnelling site in West Hyde near Denham next to the M25, where the £16million tunnel boring machines are due to break into the Chilterns in early 2021.

Protestors stood on top of the 17m high tunnel, released flares and blocked the gates to the compound by locking and gluing themselves onto structures similar to those used to disrupt the distribution of the Daily Mail and other newspapers outside Broxbourne printworks only a few weeks ago.  A banner held outside a compound entrance read ‘Extinction if forever: Stop HS2’

They were supported by a crowd of concerned campaigners from across the UK and local community members, who say they have had enough of Government lies and leaders’ inability to see the catastrophic impact of HS2.

HS2 construction and biodiversity destruction delays any plans for the UK to reach net zero by 2050. Claims that HS2 will contribute towards a new ‘greener’ future are simply not true. The carbon footprint of its construction is so huge that HS2 will not reach carbon net zero within its predicted lifetime of 120 years.

Our ancient woodlands, the Sites of Special Scientific Interest (SSSI), the Areas of Outstanding Natural Beauty (AONB) and our protected nature reserves are our precious last reserves of biodiversity in the UK. These irreplaceable areas are not being protected properly as they are being destroyed right now as projects like HS2 continue to rip through the countryside.

Luci Ryan of the Woodland Trust, said: “Government wants HS2 to be an exemplar project when it comes to the environment, but right now, it’s anything but.”

On 30 September the United Nations hosted the first-ever biodiversity summit at the 75th General Assembly. 64 UN leaders pledged to put nature at the front of global Covid recovery plans. Boris Johnson was one of them, committing to protect 30% of UK land for biodiversity and to remove deforestation from UK supply chains. [1] On October 1, just a day after that pledge, tree protectors were removed from ancient woodlands and HS2 Ltd. continued the largest single deforestation project in Europe.

A recent tweet by Lord Adonis [2] also revealed conversations were ongoing between the Prime Minister, Mr Cummings and others about scrapping half of the Northern section of the rail project.

The protestors are highlighting HS2 as a glaring example of the lies and greenwashing the people are being fed about a project founded by the Government and funded by the UK people who it #NeverAsked.

Rob Callender, Extinction Rebellion spokesperson, said: “This is not about whether trains are better than road or air travel. The generation alive today is at a crossroads; we must halt all deforestation and all biodiversity loss and this starts with HS2 because it is unnecessary, undemocratic and it is about to permanently eradicate hundreds of miles of habitats for living, interacting natural species.

“HS2 is not a project of need but of greed. What we need is to harmonise our economies with the natural world because this colonial attitude to nature is destroying lives already right now. The sea level rise being felt in the Pacific Islands and the kind of political culture that pushes HS2 through despite its overwhelming unpopularity are not separate. And if you’re at home, you have to consider getting out here and fighting for nature and reparations because we don’t have any more time. They can resell the tunnel machines. This is the end of the line for HS2.”

Daisy Pearson, campaigner from Leeds, said: “Boris Johnson claims HS2 will ‘level up the country’, but all the evidence indicates it will actually increase structural inequality between the North and the South. What’s more, it’s going to be operational in the South decades before the Northern legs are built, and behind closed doors Cummings already wants the Leeds and Sheffield leg axed and Boris ‘blows both ways’.

“During the decade of planning, communities in the North of England were never asked what they actually needed, but we’re all forced to share the £100bn-and-rising tax bill for a train the average person will never be able to afford. HS2 hired 17 PR firms to sell this lie, the lie of affordable High Speed Rail and job creation, to the public, even targeting primary school children. Boris Johnson claims HS2 will create thousands of jobs, but he doesn’t mention that it destroys just as many in the process. The jobs it does create are short-term jobs that are dependent on a constant supply of infrastructure projects. We cannot afford such unsustainable development that destroys irreplaceable wildlife. Biodiversity is finite.”

Elizabeth Cairns, Extinction Rebellion spokesperson and local mum of two, said: “Every day HS2 brings us closer to 4 degrees warming this century and will decimate much of our remaining biodiversity. The future survival of our children is being ripped away by HS2 chainsaws and the inability of our Government to act as if this emergency is real. It’s very simple, if we are to respond meaningfully to the ecological crisis we need to stop cutting down trees and we need to plant new ones, lots of them. There is absolutely no place for massively destructive projects that rape and devastate our beautiful planet.

“The responsibility lies with us all to act. Despite my rage and utter desolation at the decimation of wildlife I witness every day, I believe that if we stand together and protect our cathedrals of nature then there may be hope for my children and yours too.”

This is the winter when catastrophic and irreversible damage will be done along the HS2 route. This Government project, by its own admission, will never be carbon neutral in its 120 year lifespan.[3] In a climate emergency, that is simply not good enough. Mr Johnson is right about this, extinction is forever – we must act now. To prove he is a man of his word and the green leader he claims to be, he can start by cancelling HS2, the HS2 land can be protected as a green corridor and then he will have saved his 30%.

Other events happening along the HS2 line today in:

[3] HS2s own analysis projects that it would still have a carbon footprint of 315k tonnes after 120 years and that’s not including construction, just operation. http://stophs2.org/facts