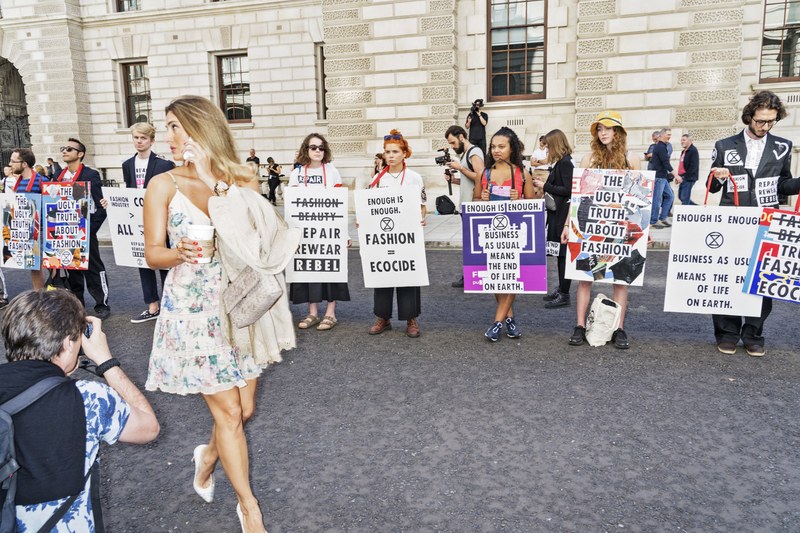 Extinction Rebellion activists, as part of Fashion Act Now, have composed an open letter, in video form, to the fashion industry which says the industry’s own words of radical change back to them – these are quotes spoken by leading industry figures during Covid-19 lockdown restrictions. The letter speaks to Fashion at a crossroad: do we carry on the way we are and destroy nature or reimagine fashion as a regenerative system that puts the planet first?

The film is shot on woodland that is recovering from a forest fire with new green shoots pushing through charred wood. The images laid over reference the strain fashion is putting on nature and the fragility of the entire system.

Environmental campaigners have also chimed in by saying their favourite quotes from the letter to camera with the hashtag #FashionActNow. The letter additionally calls on citizens to hold the fashion industry to account.

“This is not about the environmental record of those quoted in our letter but their massive cultural influence. The fashion and luxury sectors promote resource and carbon heavy lifestyles, elitism and exclusion. Creative directors of luxury brands have influence over the wealthiest people in the world. The 10% wealthiest, those earning $35,000 a year, are responsible for more than 52% of our global carbon footprint; and the wealthiest 1%, those earning $100,000 a year, contribute double the footprint of the 50% least wealthiest.

“We are in a crisis of the environment but also of culture, politics and economics. It’s beyond time for change and our industry knows it,” says Clare Farrell, one of the activists behind the Fashion Act Now campaign.

Whilst Stella McCartney has been a pioneer in sustainable fashion, actively driving change across the industry, the quotes in this letter demonstrate that lockdown has been a turning point for many other brands to get on board or review pledges. In 2020, notable figures have expressed grievances about the fashion week format: Gucci has made moves towards seasonless fashion; Saint Laurent is also following its own calendar; Dries Van Noten has led a group of brands and retailers that call for a reformatting of the fashion system.

“We want people to remember what was said during this time of reflection. This is a call for the industry, one meant to be so in touch with zeitgeist, to use their creativity to galvanise fashion’s full potential to save life on Earth,” says Sara Arnold, from the Fashion Act Now team.

The film is directed by Tessa Edwards and Kailash Bharti.

The film’s voice over is by Tori Tsui, an intersectional climate activist and educator and mental health advocate who last year was featured in Stella McCartney’s campaign. Tsui supports the campaign saying, “We need a global awareness of the impact that fashion has, not only on our physical environments, but also people. It is no surprise that the same systems that lead to over consumption and environmental degradation are the same ones that further subjugate and exploit marginalised people.”

Stills Credits: As Above

Fashion Act Now is on a mission to co-create a roadmap for a real crisis response from the fashion industry. They aim to play a role in keeping global heating safely below 1.5C whilst prioritising the needs of the most vulnerable. This roadmap will be presented in a summit next year and will mobilise activists to hold the fashion industry to account. Not beholden to profits, shareholders and political structures, they have a unique opportunity to think beyond our current economic systems and business models.

Other fashion activities within Extinction Rebellion