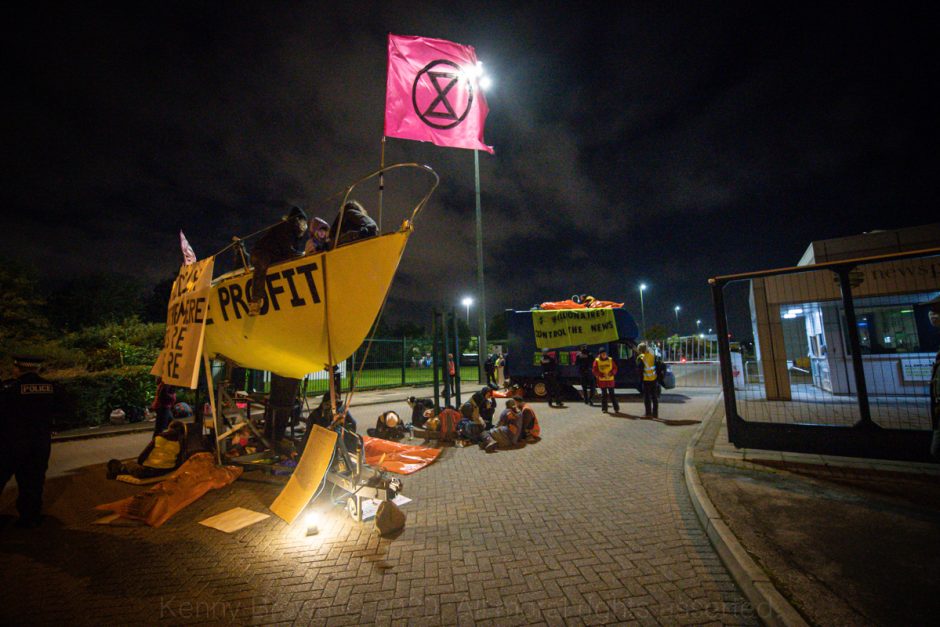 The mainstream media has failed to report on the reasons for this protest, ignoring previous press releases. So we’re putting our reasons here. Plainly and simply.

This was not an attack on the readership of any publications nor the workers who produce and deliver them, though the mass media will try to convince everyone that it was.

This was directed at illegitimate power.

Extinction Rebellion stood up to the billionaire owned press and the most powerful in our society, did so for many connected reasons that cannot be easily summed up in one single headline. Yes, most of us did it under the banner of Extinction Rebellion, but we are also ordinary people who are determined to prevent those who dominate our society from continuing to divide, exploit and dehumanise us.

Every day the mass media sets us against each other, claiming to reflect us, when really they’re intent on controlling debate. They scapegoat and dehumanise, drip feeding us poison and sowing the seeds of fear and hate in every direction.

There are many examples, from Orgreave to Hillsborough to Grenfell, too many to list, but their favourite tactic is the demonisation of people on the move. Ordinary people, mostly people of colour, often in desperate circumstances. Circumstances created by the use and abuse of a system upheld and celebrated by the very same media. Their influence affects much of our culture: dehumanising the poorest, the most exploited, those with the least power and voice, making gross inequality seem normal and justified.

They divide and rule.

We couldn’t agree more that a free press is vital to a proper democracy, and yet this is nowhere to be found. Instead what we have is a media dominated by five obscenely rich men: what’s good for them is good for us, so we are told.

The climate crisis, the destruction of the natural world, is one symptom of the corrupt system we live in, where the billionaire class take and take and take from people and planet. They know that tackling the climate crisis would mean their debt to the world would come due. So they minimise the crisis, and try to direct our anger elsewhere by creating fear of difference, undermining our communities along lines of race, sexuality, belief, gender identity, unemployment, disability and difference.

If we can recognise that we all have far more in common with one another, across the divides and borders that have been built, then we can create a society and world that works for us all: without division, hatred and the interests of a tiny few dominating us and destroying the planet.

We took action because we recognise that we cannot tackle the climate and ecological crisis without understanding and stopping the wider forces that have created it. The ever growing drive to accumulate and concentrate wealth and power, the rich getting richer on the backs of the rest, the disempowerment of women, the disempowerment of the working class, within and across borders, where racial exploitation is normalised. We act in support of all those who have fought for so long against oppression.

We took action because stopping the catastrophic heating of the planet, stopping the destruction of the natural world, cannot be achieved without global justice and solidarity. Everything is connected and it’s clear we need to build a mass movement for root-and-branch change.

We need global societies of equality, where we can all participate, free of exploitation, free of poverty and massive inequality. We need a genuine democracy and a genuine free press.

We can make this world real.

We can stand together.

This statement has been written and signed by all XR rebels who took part in the printworks action at Broxbourne, Knowsley and Glasgow.