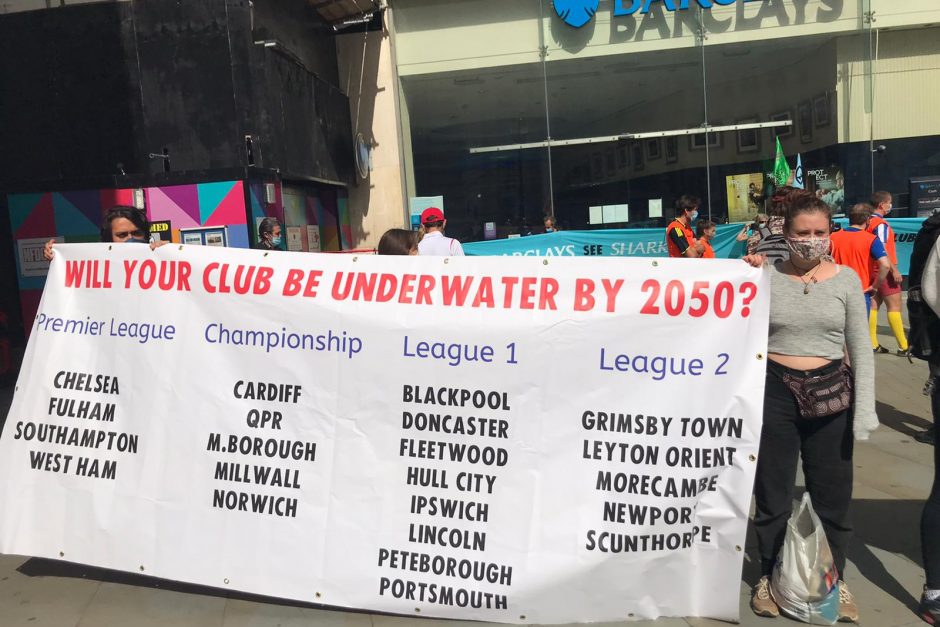 Extinction Rebellion Organise Football Matches to Highlight Relationship Between Our National Sport and the Climate Crisis.

Commencing with a 1pm kick-off this Saturday, football fans and environmental activists host ‘pop-up’ football matches on the streets of London to raise awareness of the relationship between football and the climate crisis. This action is aimed at Barclays who invest more money into fossil fuel projects than any other European bank, whilst remaining the Official Banking Partner of the Premier League.

The two teams involved in these games are the fossil-fuel sponsored ‘Sharklays’ squad and Extinction Rebellion FC. However, these matches come with a twist: the referee’s a banker and the games are rigged, illustrating how corporate greed and finance are a corrupting influence not only in football but more significantly, in climate policy.

XR Football co-founder Elliot Patrick, 25, said “this landmark action is the first in the UK to draw attention to the relationship between our national sport and what scientists regard as the greatest threat humanity will ever face”. He continued “being part of the football community and caring about these bigger issues are not mutually exclusive. Marcus Rashford has shown that there is space for these important conversations in the game.”

One quarter (twenty-three) of English football league stadiums are predicted to be temporarily or permanently unplayable by 2050 due to sea level rise and extreme weather events according to mainstream climate warming projections. Livelihoods and communities in close proximity to these clubs will also be affected. Grassroots football also faces significantly greater precarity than the professional game.

This family-friendly action is part of an on-going XR campaign against Barclays, who have been the largest European funder of fossil fuels projects to the tune of more than $150bn between 2015-2019. How we deal with the climate and ecological crisis will define the future of not only the human race, but life on earth. Barclays’ current business model is actively investing in the destruction of our shared life support system. There is time to change and Barclays must act now.

People on the Ground