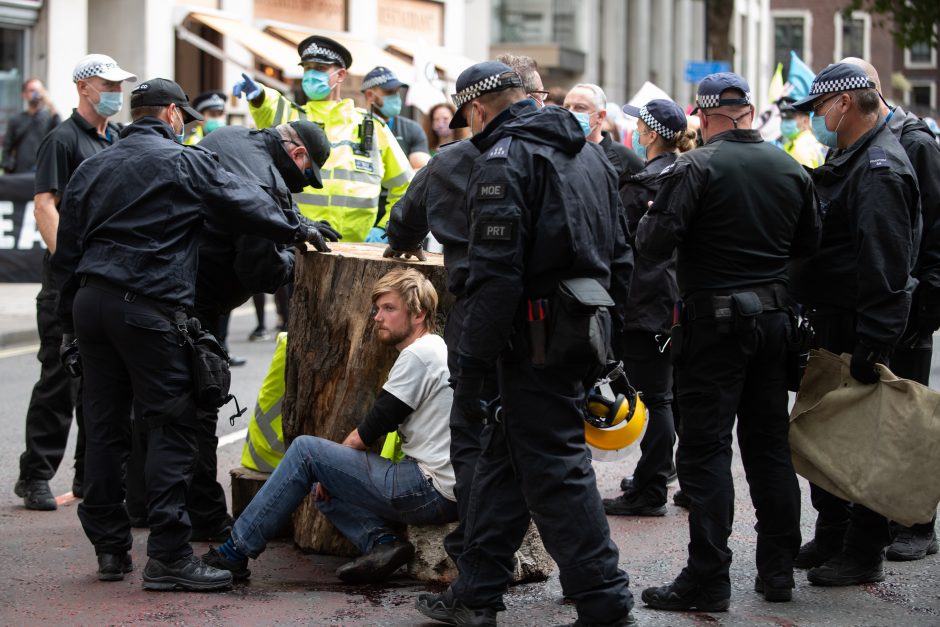 ‘We’re not having it!’ Extinction Rebellion tell the Police STOP SUPPRESSING PEACEFUL PROTEST

Mobilising citizens journalists, legal observers and our legal team – Extinction Rebellion will not allow abuses of police powers to pass.

Following the racist arrest of a young black bystander in Parliament Square, repeated arrests without warning in Parliament Square, threats of conspiracy charges made against two men pushing a boat named ‘Lightship GRETA’ after the teenage climate activist, from Brighton to London and the confiscation of a banner, Extinction Rebellion has put the Metropolitan Police on notice.

We condemn as grossly excessive the Met’s communications, their policy and their policing on the ground.

Overzealous communications the Met is putting out that appear intentionally vague or designed to deter people from joining the protests, have included:

Policy that constitutes an overreach of their powers have included:

Incidents on the ground have included:

Gracie Bradley, interim director of Liberty, said: “These restrictions are heavy-handed and go too far.”

“History shows us how aggressive policing is used as a tool to criminalise and control Black communities, muslim communities, poor communities, and to silence those speaking out against injustice. The aim is to paint peaceful people as violent, lawful people as criminals and vulnerable people as a threat. The aim is to set communities against each other and detract from the failures of Government. We’re not having it. We will stand against this and for our right to protest. We will stand against oppression. We want to live.”

“Our independent report on the policing of last October’s Extinction Rebellion protesters highlighted the misuse of police powers and disproportionate and unjustifiable levels of aggression and violence in making arrests. Our monitoring over the last few days has started to receive evidence and testimony from campaigners about similar incidents.

“It seems little has been learnt by the police since the High Court overturned its unlawful restrictions on the right to protest last year, with added concerns raised now about the apparent targeting of young people from black and minority communities.

“The suspicion remains that the Metropolitan Police see all XR supporters as “criminals” and are judging them not on their individual actions, but by their association with a movement that officers perceive as “illegitimate”. This isn’t facilitating the right to freedom of assembly – once again, it’s looking for ways to aggressively shut XR’s protests down.”

Jules Carey of Bindmans representing XR said: “Even before the protests started this week misinformation published by the Met Police served to deter some activists from participating in the XR related actions. Following our challenge the Met backtracked and withdrew these communications and committed to publishing accurate information about police powers going forward. The Met Police have form for over-zealously policing XR activities including their failed attempt to ban all XR protests last autumn; and also placing XR on a list of extremist ideologies under the Prevent programme. XR are determined that their supporters should be permitted to exercise their democratic right to protest and draw political attention to the climate emergency, and they will fully utilise all legal options if this right is interfered with”.

Deputy Assistant Commissioner for the Met  Laurence Taylor told the BBC that his force had learned lessons from last year’s protests.

A key lesson they should have learnt was that we will defend our right to protest in the courts. Our successful Judicial Review against the Met’s policing of our October Rebellion cost the public 10s of 1000s of pounds – in processing illegal arrests and High Court costs – and exposed it to further costly false imprisonment claims.

Our lawyers have already communicated with the Met’s legal department about their attempt on Monday to restrict our protests and they acknowledged their mistake. We will be gathering examples of overzealous communications, policy and on the ground policing in the coming days. Our lawyers are on stand by.

We will continue to stand for our right to peaceful protest but these legal challenges can cost tens of thousands, please support us by donating to our legal defence fund.