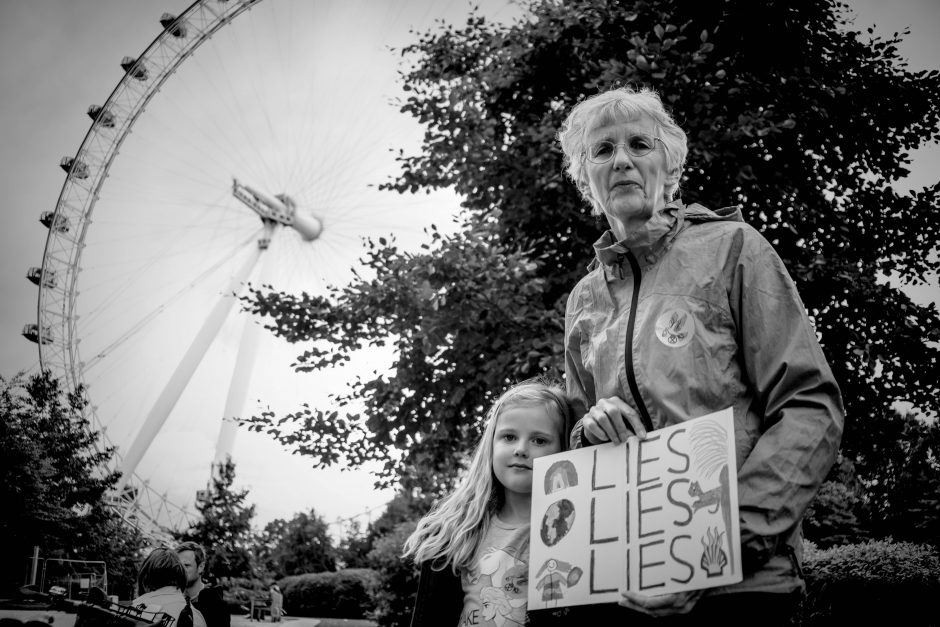 Today at 6pm, the Extinction Rebellion group Writers Rebel will take 20 high profile and award-winning novelists, poets and screenwriters to 55 Tufton Street, London, to speak out against climate science denial and the influence of climate sceptic think tanks on UK politics.[1]

There is a press call at 6pm on 55 Tufton Street for a photo opportunity with writers and speakers.

The event then begins at 6.30pm with speeches from Caroline Lucas MP, followed by author, journalist and activist George Monbiot.

At 9pm, host Juliet Stevenson CBE will read a message of support and words from Margaret Atwood, while half a dozen writers and other activists will risk arrest by blockading the entrance to 55 Tufton Street with paint, stencils and other physical methods.

In video’s released today, Simon Schama and Ruth Padel explain why they are supporting the action.

The action ‘NO MORE LIES: TELL THE CLIMATE TRUTH’ will take over the usually quiet Tufton Street to target organisations that are worsening the climate and ecological emergency through their oil-money-backed lobbying. These groups include many housed at 55 and 57 Tufton Street, addresses that have become synonymous with climate science denial and home to many right-wing ideological groups with links to oil, agribusiness and both houses of Parliament. These include the UK’s principal climate science denial group The Global Warming Policy Foundation, launched in 2009 by Nigel Lawson and Benny Peiser and advised by climate skeptic and Tory peer Viscount Matthew Ridley ; and The Centre for Policy Studies, whose deputy chair is Sir Graham Brady, Chair of the 1922 Committee of backbench Conservative MPs.[2][3][4][5]

On the day that Caroline Lucas tables the Climate and Ecological Emergency Bill, which calls for a Citizens’ Assembly on the Climate and Ecological Emergency, speakers will call on MPs to back the bill.[6] Decades of corporate lobbying and party politics have led to a climate and ecological emergency that poses an unprecedented existential threat to humanity and all life on Earth. The Citizens’ Assembly will be run by non-governmental organisations under independent oversight. This is the fairest and most powerful way to cut through party politics.[7]

Speaking by video to support the launch last week, comedian and author Stephen Fry said: “It’s sickening how much money is being spent on think tanks and professional lobbyists to spread confusion, lies and doubt on the subject of man-made climate change and its horribly real threat. These people and their huge corporations funding them are utilising exactly the same playbook that big tobacco used to sow doubt and confusion over the clear scientific evidence that emerged about smoking. The truth will always out in the end though.

“Eventually, even the vested interests trying to discredit Extinction Rebellion and its supporters, even they won’t be able to keep lying. But by then so much terrible damage will have been done to the planet and millions of its citizens. We can’t keep letting this deliberate climate denial stand. We have to stand up and expose the lies.”

The action is coordinated with forthcoming XR group Money Rebellion which is targeting the finance industry for its inaction on the climate and ecological emergency and investment in destructive practices. At 5pm XR co-founder Gail Bradbrook will deliver a talk on the economics of the climate emergency, in advance of the writers event at 6.30pm.

Dr Bradbrook, co-founder of Extinction Rebellion, said: “The current economic system we have is killing life on earth and we desperately need a grown up conversation about something different. Bodies like the IEA won’t reveal their funders and yet are often given airtime advocate for free market fundamentalism, as if it is a law of nature. We want a Citizens Assembly to rewire our economic system so that it stops harming and starts repairing the damage done.”

Writers Rebel aims to galvanise writers and the publishing, literary and creative industries to commit to using their voices to tell the truth about the emergency, in order to inspire readers and the public to take action for social and cultural transformation. They feature the likes of A L Kennedy, Zadie Smith, Ed Vulliamy and Sir Simon Schama on their blog at www.writersrebel.com.

Timings for the speakers are as follows (subject to change on the day):

20.50 Juliet Stevenson and Mark Rylance – Thank you for attending.

21.00 Margaret Atwood piece to be read by Juliet Stevenson

[1] Writers Rebel launched their event with a video message of support from Stephen Fry, see https://www.independent.co.uk/news/uk/stephen-fry-extinction-rebellion-writers-rebel-think-tank-lawson-a9681596.html

[4] For more information on the Centre for Policy Studies specifically, visit https://www.desmog.co.uk/centre-policy-studies

[5] For more information on the Institute of Public Affairs specifically, visit https://www.desmogblog.com/institute-economic-affairs

For an overview of links between Tufton Street, lobbyists and the Conservative government, visit https://www.desmog.co.uk/2019/08/01/boris-johnson-cabinet-tufton-street-ties-map

Find out more about the writers supporting Writers Rebel and Extinction Rebellion at www.writersrebel.com

A list of public actions from Extinction Rebellion and affiliated groups can be found at https://extinctionrebellion.uk/2020/08/29/september-rebellion-actions-speakers-schedule/

Writers Rebel was born in the summer of 2019, when a discussion about literature’s lack of engagement with the climate and ecological crisis led to a small group of writers deciding to take action. The group launched during Extinction Rebellion’s October Rebellion at a marathon reading event in Trafalgar Square. Forty of the UK’s leading writers – including Simon Schama, Robert Macfarlane, Susie Orbach, Ali Smith, Irenosen Okojie, Philip Hoare and Naomi Alderman – came together to read work about the climate and ecological emergency. Zadie Smith and Margaret Atwood supported from afar with an exclusive recording and interview.