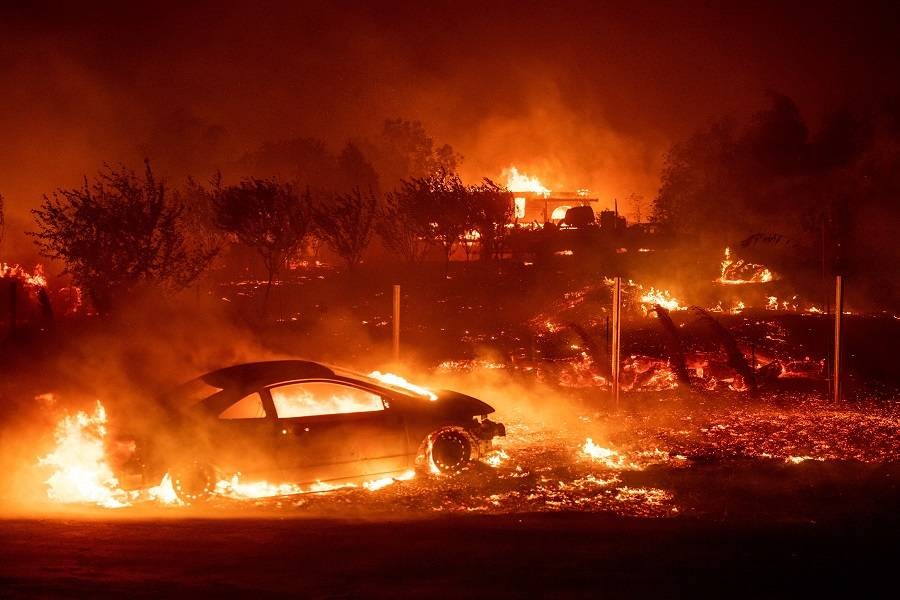 “We face a direct existential threat. Climate change is moving faster than we are – and its speed has provoked a sonic boom SOS across our world.

“If we do not change course by 2020, we risk missing the point where we can avoid runaway climate change, with disastrous consequences for people and all the natural systems that sustain us.”
– Secretary-General of the United Nations, António Guterres

The government is failing to do what’s necessary to keep people safe. We are here, taking action, because their criminal negligence is putting lives at risk.

They must not be allowed to carry on like this. We have an opportunity to turn this sinking ship around but we must act now, not next year, not in ten years. Now.

You don’t need to be told by Extinction Rebellion how bad this crisis is. Just look around you, look at California, Brazil, Mauritius, Wales, your own backyard. Our world is unravelling, the collapse of civilisation is now a very real, near-term threat. It’s never been more clear that we are in a state of planetary emergency.

The social contract between government and its citizens is broken. We refuse to be bystanders and wait for this emergency to push beyond the point of no return. While those in the global South burn, while our children are set to pay for our mistakes, while our most vulnerable in society suffer first and worst. This is why we act.

Climate scientist, Wolfgang Knorr, said: “It’s now time to take a step back and reflect on all the damage we’ve already done, the breakdown and collapse that is already happening all around us. Instead of constantly arguing about the way out of the climate crisis, we need to see that anything we do from now on is about limiting the damage to its humanly possible minimum.

“There is no salvation, only responsible action.”

Today, Extinction Rebellion will take to the streets of London, Cardiff and Manchester. We will take action day after day and rebel for all we hold dear.

In London, we will be in Parliament Square at 12pm. Stand with us.

In Cardiff we will be at Gorsedd Stone Circle in Bute park. Stand with us.

In Manchester we will be St Peters Square at 10am. Stand with us.

Because change is NOW.

Macey, 21, Bethesda, North Wales: “We’re Rebelling in Cardiff on the 1st of September because it’s the 6th most at risk city in the whole world and the first city in the UK that will be affected by rising sea levels, as a result of the man made Climate crisis. The Climate & Ecological Emergency bill will help us with a green recovery from the coronavirus pandemic, so future generations, including myself and future children I might have, will have a future which is not full of war and famine. I simply want a life for myself, friends and family which is not threatened by the criminal inaction of the government. I want to live.”

In London, young people aged 6-20 from XR Youth, UKSCN, XR Families, Parents for the Future and Culture Declares Emergency will open the Rebellion in Parliament by reading their ‘letters to power’, calling on law-makers to protect their futures by backing the Climate and Ecological Emergency Bill and prepare for crisis with an emergency National Citizens’ Assembly. If MPs are taking this situation seriously, the easy option for them is to back this bill – a clear roadmap for a political system that is hell bent on continuing with its toxic agenda.[1]

Actions and speakers listings for the next two weeks in London and Cardiff can be found on our website.

Pediatrician and member of Doctors for Extinction Rebellion, Alex Armitage, said: “As a children’s doctor I show a positive and friendly face to the children and families that I treat in A&E but inwardly I feel sick.

“Scientists are not lying when they say that today’s generation of children face the bleakest of futures, due to the lack of action that governments are taking on the climate and ecological emergency. I’ve seen the graphs; I’ve read the evidence. We must act NOW.

“The first duty of a government is the security of its citizens. We saw with Covid-19 how the UK government ignored scientists and delayed the lockdown, with fatal consequences. A Citizens’ Assembly of ordinary people would have had the wisdom, humility and empathy to listen to experts, read briefings and make sensible decisions.

“That’s why, along with many thousands of other rebels across the planet, I am using my democratic right of nonviolent protest to push the Government to cede power to a Citizen’s Assembly to make the right decisions to safeguard our children’s future.”

We know our critics will try and make these next few weeks all about Extinction Rebellion. About how we’re selfish, wreckless, jobless, extremists. About how the climate crisis really isn’t as bad as we say and that we just want power. This narrative is false.

Prof. Lonnie Thompson, Distinguished Professor in the School of Earth Sciences and former director of the  Byrd Polar and Climate Research Center, said: “Why then are climatologists speaking out about the dangers of global warming? The answer is that virtually all of us are now convinced that global warming poses a clear and present danger to civilization” [2]

They want us divided on the specifics, planting seeds of doubt about our credibility. A new narrative will be spun claiming that we can’t possibly know for certain what the future holds so how can we be taken seriously at all?

But this story isn’t about Extinction Rebellion. It’s about a climate and ecological emergency and those in power who know the truth and choose to only act with their own interests at heart.

Actions and speakers listings for the next two weeks in London and Cardiff can be found on our website.