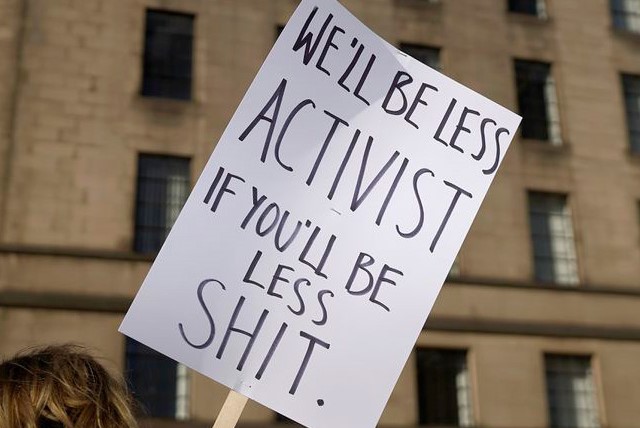 A week in climate news: Better to be late than a no show

WARNING: The following is a statement for our friends in the mainstream media. We apologise in advance for any journalistic offence this may cause.

What a difference a day makes’ is a great song, but like most things it depends on what ‘version’ of the song you’re singing – Washington or Winehouse? They sound completely different even though the words are the same.

So this week when we, I, you look down the lens of the Climate Crisis what do we, I, you see? As it will be different depending on where you’re looking.

It’s a bit like the song, the words are the same but what ‘version’ you are singing makes a difference – a big difference on how you listen and act.

In the past week we’ve seen some of the most excruciating days of extreme heat we’ve ever seen here in the UK, with wildfires in Surrey of all places, followed by biblical rainfall resulting in the tragedy in Stonehaven yesterday.

For those who think the climate crisis doesn’t affect us here in the UK, nevermind what the papers are saying – just take a look out your front door.

We fell off our seats this week when the Daily Mail came out about the climate. The D-A-I-L-Y M-A-I-L, you know, the paper who has lovingly called us attention seeking doom mongerers.

To be fair to the Daily Mail, we aren’t for everyone. Disruptive – you bet. Irritating – maybe. Annoying – check. Makes mistakes – that’s clear.

But doom mongerers? The reality of what we’re seeing says not.

It’s never going to be easy when your ‘versions’ of the truth are fundamentally different. Like banging your heads against a brick wall or trying to get boomers and zoomers to agree on Brexit. It now seems that the ‘versions’ of our truths are aligning.

Because when the Daily Mail reports that ‘human civilization stands a 90% chance of collapse within decades’, surely we know we are speaking the same truth?

Because when the Times links the tragedy in Stonehaven to the Climate Crisis surely we know we are speaking the same truth? The same paper who said last week that Extinction Rebellion and Greta’s “message of doom is a religion not reality,”

Maybe it’s time to call a truce and all get on the same team?

It would be great for us all to be singing from the same hymn sheet before September, when Extinction Rebellion take to the streets again.

As journalists, your voices count when it comes to telling the truth. Help us push the government to act on that truth when we head to Parliament on the 1st.