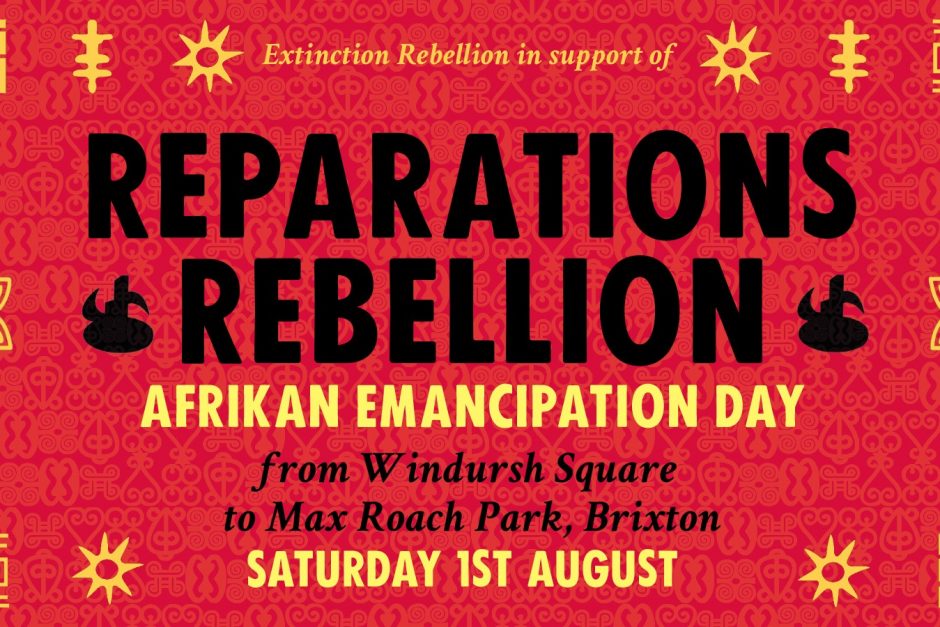 From 7am on Saturday 1st of August Extinction Rebellion will join in support of the Afrikan Emancipation Day Reparations Rebellion Groundings to block Brixton Road from Max Roach Park to Windrush Square. The coalition of groups, including the Stop the Maangamizi: We Charge Genocide/Ecocide Campaign, Afrikan Emancipation Day Reparations March Committee, Extinction Rebellion Internationalist Solidarity Network (XRISN), Rhodes Must Fall Oxford, and A Tribe Named Athari, will occupy the area for the day demanding holistic reparations, including planet repairs.

This is the 6th year that reparations focused protests have been held on Afrikan Emancipation Day and while previously they have taken the form of a march, this year the coalition of groups will occupy central Brixton. Spokesperson for XRISN, Stop the Maangamizi and The Afrikan Emancipation Day Reparations March Committee, Esther Stanford-Xosei, said: “As organisers we are inviting members of our communities and the wider public to join us in a show of strength and solidarity in locking-down Brixton because we are not being heard in our people’s demand for the UK Government to establish the All-Party Parliamentary Commission of Inquiry for Truth and Reparatory Justice and commit to holistic reparations.

“We have pursued legal means over the past six years and been ignored. It is clear that the government will not act without compulsion and so we have taken the decision to engage in peaceful civil disobedience.”

The theme for the Reparations Rebellion Groundings taking place on Saturday is – ‘Uniting to Stop the Maangamizi for Our Very Survival: Planet Repairs Now!’. Maangamizi is a Kiswahili term for ‘Afrikan Hellacaust’ or ecocide and genocide, popularised in the song ‘Maangamizi’ by Bristish musician, journalist, author, activist and poet Akala [1]. It takes place on Emancipation Day, commemorated in the Caribbean and some parts of Africa marking the passing of the 1833 Abolition of Slavery Act, which came into force on 1 August 1834.

The Reparations Rebellion adopts a broad definition of reparations beyond monetary compensation, towards a focus on repair and stopping the harm. To this end the roadblock will reduce air pollution in Brixton providing a space for the community to come together without a detrimental impact to their health. Studies have shown that those from poor and BAME communities in the UK suffer the worst effects of deadly air pollution. [2] Brixton will be transformed into a public action-learning space featuring a number of arts focused reparations conscientisation activities.

There will be 7 Reparations Rebellion Grounding Spaces: [3]

The event aims to promote the necessity of stopping the genocide and ecocide of African people and their environments. Speakers will highlight the relevance of reparatory justice and environmental justice to the advancement of planet repairs solutions to the climate and ecological crises, disproportionately impacting peoples in Africa and other parts of the Global South and their diaspora communities in the Global North.

Extinction Rebellion co-founder Clare Farrell, said: “Extinction Rebellion UK established a relationship with Stop the Mangaamizi Campaign from early on in our development and I’m so excited to attend the Reparations Rebellion as part of our ongoing learning and relationship building as we strive for allyship with struggles everywhere, especially in the global south. Kofi Maluwi Klu and Esther Stanford Xosei have been an important influence on our movement helping us to recognise the need to merge global rebellions in solidarity. Only with this ecosystem of united rebellion do we stand a chance of turning the tide of denial and innaction. See you on the streets!”

These Groundings will also be a celebration of the decades of efforts made in and beyond Lambeth which have culminated in the historic passing of the motion initiated by the Stop the Maangamizi Campaign and Green Party – ‘Atonement and Reparations for the Transatlantic Traffic of Enslaved Africans’- passed by Lambeth Council on 15th July 2020. [4] The motion was co-written by Councillor Scott Ainsley of the Green Party and the Stop the Maangamizi: We Charge Genocide/Ecocide Campaign.

This will be a socially distanced protest event.

[2] Associations between air pollution and socioeconomic characteristics, ethnicity and age profile of neighbourhoods in England and the Netherlands: https://www.sciencedirect.com/science/article/abs/pii/S0269749114005144?via%3Dihub

[3] The meaning of groundings popularised by Afrikan-Guyanese scholar-activist historian, Dr Walter Rodney is: popular education sessions with grassroots forces for organising resistance actions towards the concrete struggle for a new Society and Another World.