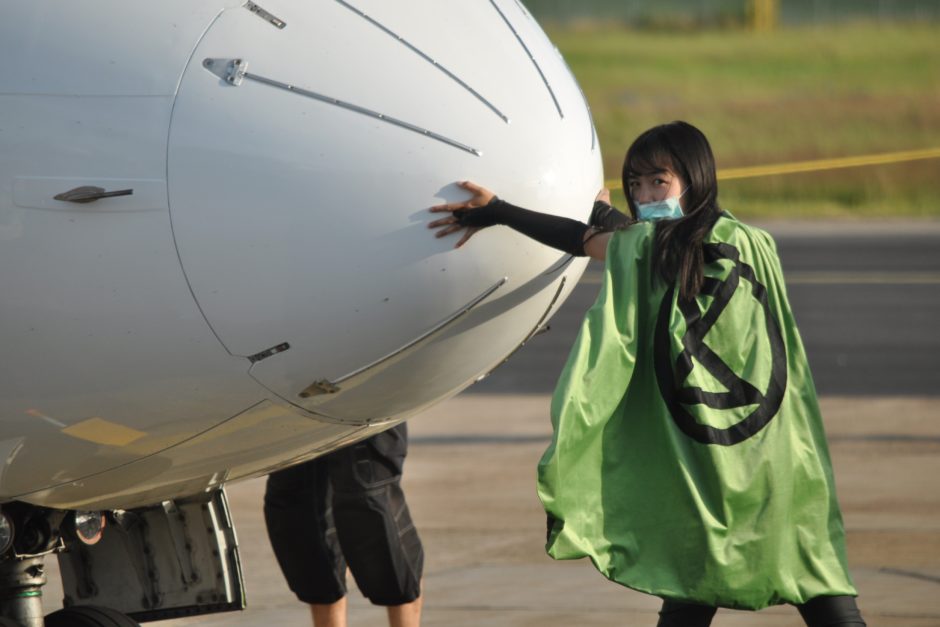 Exciting times on the frontlines of change. XRUK has announced the next UK Rebellion. For further details, or to see how you can get involved, check out the Rebellion FAQ.

Also this month, France sees the results of its first Citizens’ Climate Assembly, aimed at drastically reducing greenhouse gases while addressing climate and social justice. This is a massive step in the right direction for those of us fighting for the future of humanity and the planet.

Citizens’ Assemblies are a fair and sustainable way to find solutions to the Climate and Ecological Crisis. They focus on bringing the choices directly to the people – without lobbying of fossil fuel firms and interference of party politics. In order to further understand their nuance and importance, we’ve put together a juicy selection of articles in our Must Reads section.

We bring you news of a glorious wave of protest across Europe. Multiple creative actions and many dozens of arrests have helped alert the public and the government to the urgency of the situation. See highlights below and check out our Unchained for a full rundown.

Also, we hear the latest from Australia, where rebels were getting hot under the collar in response to the government’s drive toward a ‘gas-led recovery’. And in Hong Kong, just days before the controversial national security legislation came into effect, rebels staged a graveyard action to highlight the daily deaths from toxic air pollution.

Be sure to read our Upcoming section for a powerful new global action highlighting the courage and plight of Indigenous communities in Brazil. And in line with the topic of assemblies, be sure to tune in this weekend for the Global Assembly for the Amazon.

Buried in Coronavirus news over the past few months, hugely exciting things have been happening in France.

The world’s first major citizens’ climate assembly has been hard at work since October 2019. On 18 June they presented their proposals for addressing the climate emergency.

The Convention Citoyenne pour le Climat (CCC) is an independent committee of 150 French citizens drawn by lot to reflect French diversity, with a mandate to reduce French greenhouse gas emissions by at least 40% by 2030 while advancing social justice.

Convention members were divided into working groups to tackle a range of social and economic issues and worked closely with climatologists and economists, as well as economic and social organisations.

The CCC has submitted 149 proposals to Macron, including: measures addressing transport, energy, agriculture, and construction; constitutional amendments to prioritise biodiversity; the creation of a new body responsible for enforcing planetary limits; and a strong call to make ecocide a crime by national referendum.

Organisers from the Stop Ecocide campaign have praised the outcome as phenomenal news.

60 brave Belgian rebels were arrested in Brussels while carrying out a symbolic baptism of the city’s Finance Tower.

The tower had its name removed and was re-christened the Resilience Tower. Each rebel carried a sign highlighting elements of our current society that we need to leave behind and those we need to strengthen. Police blocked rebels’ attempts to continue their protest outside the Prime Minister’s office and arrested 60 of their number.

It was the culmination of 14 days of actions across Belgium, stopping a ‘return to business as normal’ and calling for reflection on the needs of society.

One rebel said: “We need to pause and think about what our needs are for the future. Do we want to return to a system based on fossil fuels, industrial agriculture, human exploitation and structural racism? Or work towards a resilient society that recognises the urgency of the crises that await us?”

Cooking Up a Protest Down Under

Rebels staged a dramatic ‘Now we’re Cooking the Planet with Gas’ action outside the constituency office of the Energy Minister in Goulburn, New South Wales.

They were protesting the government-appointed National Covid-19 Coordination Commission’s push for a ‘gas-led recovery’. The NCCC is headed by and stacked with gas industry executives.

Natural gas consists mostly of methane, the second most significant greenhouse gas after carbon dioxide and a key driver of the climate crisis.

35 pairs of shoes were laid out to symbolize the 35 people who lose their life from toxic air every week in Hong Kong. The city’s air pollutants consistently exceed guidelines set by the World Health Organization.

Worldwide, outdoor air pollution kills more people than tobacco smoking. As one rebel put it: “Pollution kills not only humans but all forms of life. The inaction of leaders is unacceptable.”

People worldwide have shown their support for the people of Hong Kong. In the UK, rebels blocked access to an arms factory to oppose exports of UK-manufactured rubber bullets and tear gas used to suppress demonstrations in Hong Kong.

There Are No Emergency Exits

A SAS domestic flight was delayed for an hour at Ängelholm–Helsingborg Airport, when a brave XRSweden rebel ‘superhero’ glued herself to the plane.

On the day Swedish airports reopened, rebels protested government bailouts of the aviation industry as part of its Covid-19 recovery.

The rebels called on Sweden to stop funding polluters and use public money to invest in green jobs and design a sustainable economy. They said: “Our action was not directed at airline workers or individual passengers. This is about the need to change the whole system.”

The non-violent protest was part of Extinction Rebellion Europe’s Bail Out The Planet action wave. 5 rebels were briefly detained by the police.

In a second action on 29 June rebels delayed a SAS flight from Gothenburg to Stockholm by refusing to sit down.

Rebels stated ‘These subsidies mean that Sweden cannot live up to the Paris Agreement and its own climate goals (…) Just as I would break a car window on a hot day to save a child or a dog, I sound an alarm because we are in a planetary emergency.’

The rebels now face fines and up to 6 months in jail.

Once again we have too many actions for one newsletter. To catch up on all the actions that have been happening around the world – and especially during Europe’s week-long wave of actions – you’ll have to read XR Unchained. It’s choc full of beauty, courage, and inspiration. 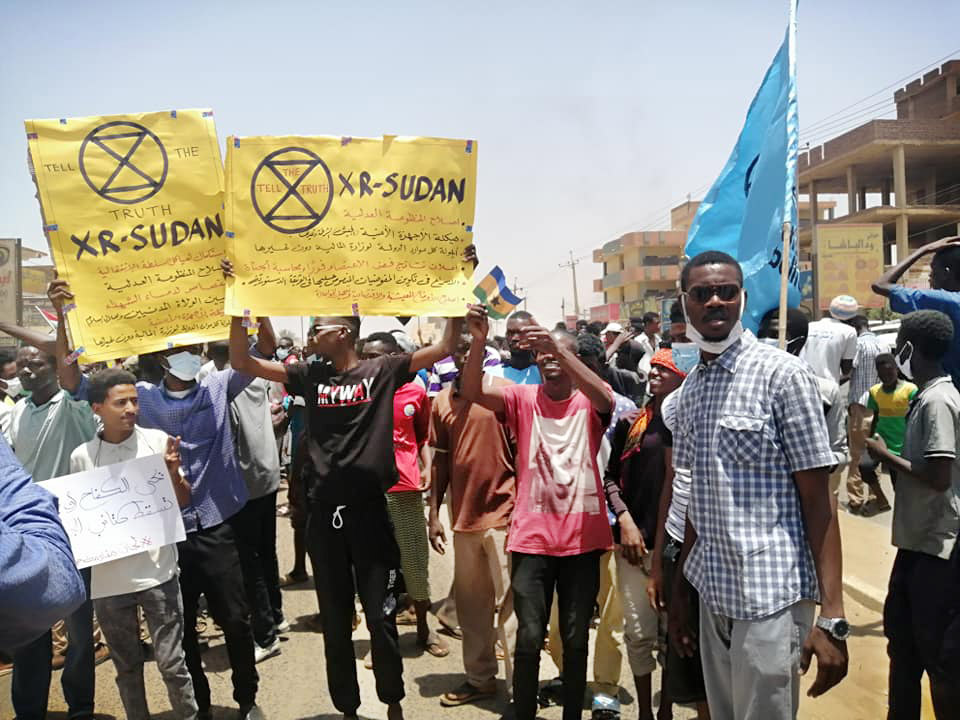 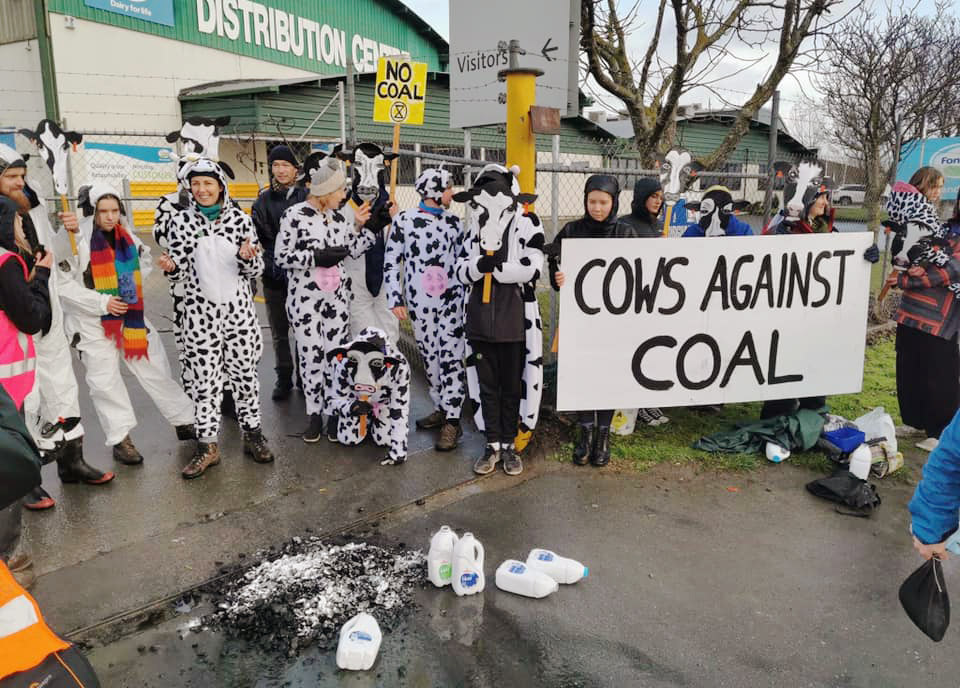 The giant global dairy corporation Fonterra was greeted with drums, cow costumes, placards and a pile of coal, as XR Ōtautahi (Christchurch) asked the question: Why are Fonterra still using coal in a climate emergency? 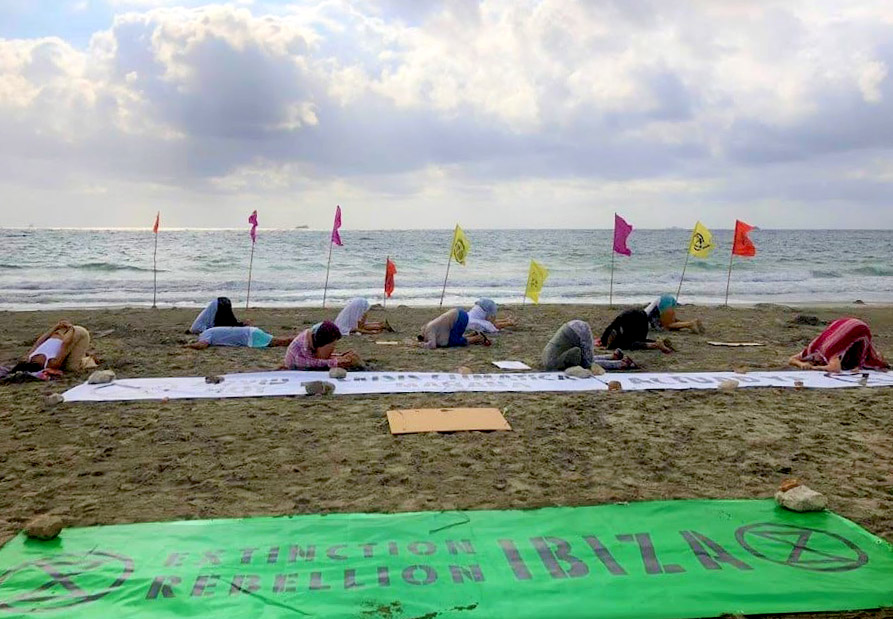 XR Ibiza put their heads in the sand at Playa d’en Bossa “to alert citizens and request urgent media and institutional action in the face of the Climate Emergency.”

From September 1st we will peacefully blockade the UK Parliament in London and Cardiff until they promise that the first thing they’ll do is pass our 3 demands into law. We’ll keep the blockade going for as long as it takes, so take two weeks off starting from the 1st.

In order to build pressure towards the blockade, there will be a Countdown to Rebellion starting 28th August with local groups around the country invited to cause high impact disruption in their own regions, to gather and galvanise rebels in readiness for action and to warn the Government that the Rebellion is coming!

If we stand a chance of making this historic Rebellion successful we need to grow the movement bigger than before. This Rebellion belongs to all of us, so if you haven’t already, join a local group and start using our mobilisation methods to help grow the movement.

Find out more about the plans for both of these on the website here, sign up here and invite all your friends.

Together we are powerful. Crisis does not have to mean collapse.

Indigenous people in Brazil are facing unprecedented threats: on top of attacks from government-sanctioned racism and land grabbing, the Covid-19 mortality rate is much higher among Indigenous people.

Without much-needed medical help, many lives will be lost. These are the people on the front line of our fragile ecosystem. Guarding the lungs of the planet from big business and deforestation.

Join this urgent call for global decentralised action by Indigenous leaders in Brazil on Sunday 9th of August.

“It’s not just a number. Each indigenous body holds an ancestral enchantment. For each indigenous person who dies, part of our collective history dies too” Celia Xakriaba

Global Assembly for the Amazon

Tune in on 18th and 19th July for the Global Assembly for the Amazon, giving voice to the plight and courage of Indegenous peoples in this time of unprecedented change.

Have you seen the brilliant XR Africa News Online? With updates from XR groups in Africa & Global South, and also exciting content from a blend of other environmental campaigners. Looking for help from content writers and editors in order to efficiently feature news from various XR groups across Africa.

Global Support is a support body facilitating the flow of resources and content between groups all across the world. Offering trainings, funding, IT support, storytelling, and more.

There are a range of roles available, including Arts, Systems Development, Events, Tech, SOS, Finance and Fundraising, Participative Democracy and Partnerships. Crucially, the Media & Messaging team, who work on the movement’s global communications strategy, is also looking for new rebels.

If you would like to join the M&M team, fill out this form. For all other roles, go here, or email XRint-onboarding@protonmail.com

Hello rebels around the world! The XR Global Media Library keeps on growing! Add your images to the gallery and let your story be told. Catch a training session here (now also in Spanish). And check out the quick guide with the upload logins.

Catch the latest from Writer’s Rebel. Acclaimed poet & environmentalist Homero Aridjis writing from Mexico where the populist President is pushing forward with his Mayan Train railway that threatens to devastate the precious eco-systems of the Calakmul Biosphere Reserve.

Check out the latest from XR Podcast. This week’s podcast includes a Swedish activist Helena who watched Ladakh in India being taken over by global forces and realized nothing good was coming out of it and a woman farmer whose Indian grandmother taught her about seeds and local varieties. So there is quite an international flavour to the pod.

Need some quick banners, symbols, backgrounds? Check out the XR Visual Generator. Make your own custom XR artwork in moments. Perfect for the busy rebel on the move.

This issue, we explore our third demand and why we need a Citizens’ Assembly on the Climate and Ecological Emergency with a triple video offer, happy watching!

Thank you for reading. There’s so much exciting stuff going on in the movement that we barely have time to write this sign-off. Keep up the good work! If you have any questions or queries, please get in touch at xr-newsletter@protonmail.com.