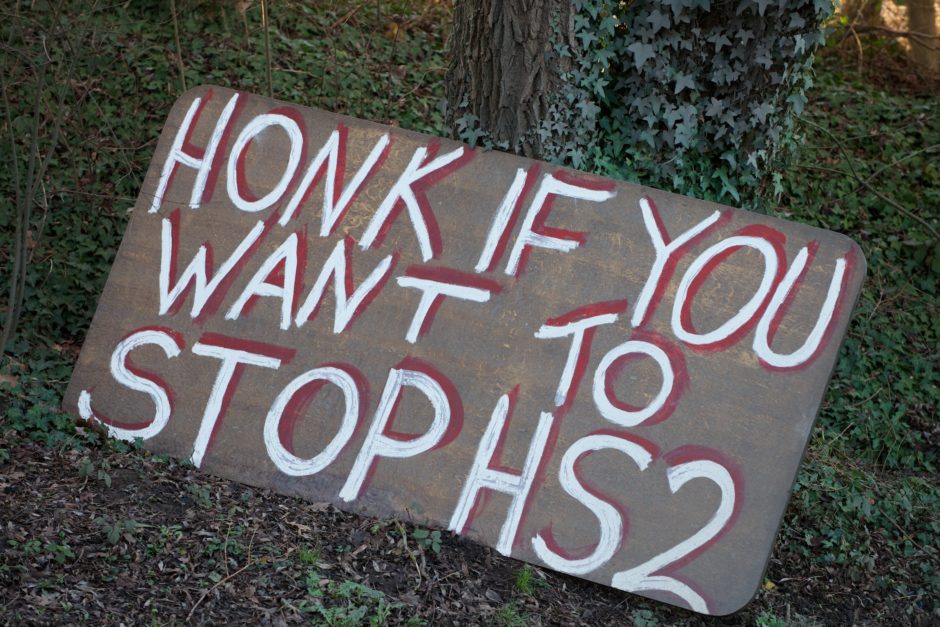 20-27 June: Extinction Rebellion and local communities to walk 125m along HS2 route to say “We were never asked!”

On June 20th, Extinction Rebellion, Stop HS2 campaigners and local communities along the HS2 route will begin a week long march from Birmingham to London to oppose the building of the controversial train line that is decimating countryside communities and creating a huge financial burden at a time of deep economic crisis. The marchers will draw attention to UK taxpayers being forced to foot the bill for a project with questionable benefits, without the people’s consent.

The ‘Rebel Trail’ will depart from Birmingham Curzon Street at 9am on Saturday and will travel 125 miles to London along phase 1 of the HS2 route.[1] Traveling through villages and local communities, marchers are encouraged to carry symbols of the ancient woodland and animals being destroyed.[2]

Matthew Bishop from the Save Cubbington Woods campaign said: “We’re marching because we’ve had enough. People have had enough of our government hiding the truth about this project, showing no transparency or accountability. We’ve had enough of our failing democracy, and enough of the continued harm being inflicted on our communities and natural environment.

“That the Government has carried on with HS2 when we urgently need funding for our health service, our economic recovery and our local transport networks, makes clear where their priorities lie. Building this line is bad for our wildlife, bad for the taxpayer and an assault on our democratic values we hold so dear.”

Stop HS2 campaign manager Joe Rukin said: “Right from the start, HS2 has been a railway fueled by lies, with grandiose and impossible promises made by those who will profit it. The already fragile case for this white elephant has been destroyed by the changes to work that coronavirus has brought, but instead of facing these facts, Boris Johnson chose to sneak out Notice to Proceed for HS2 just as it was confirmed that Parliament was lied to by HS2 bosses who are desperate to keep their gravy train running at a time when millions are facing life on the dole.”

Local communities are invited to join the walk in relay when it reaches their location. Activists, local residents, StopHS2 campaigners and more, will walk in socially distanced groups of no more than six, and are being urged to wear Personal Protective Equipment in strict accordance with public health guidelines. Marchers will stay in camps along the line where people have been resisting the works and meet with local people facing eviction from their homes or land by HS2 Ltd’s compulsory purchase orders, concluding in London, Euston on Saturday 27th June.

Elizabeth Cairns, Extinction Rebellion member and Stopping HS2 Chilterns cofounder, said: “The Government did not ask the public if they wanted HS2. Instead of “levelling up” the country, this train will heighten existing levels of inequality and drag more economic activity to London. Globally we are living through the sixth mass extinction. Nationally we are approaching a recession unseen in scale since the 1920’s. HS2 will not only adversely affect communities along the route, it will also contribute to the global climate crisis and taxpayers will be left to foot the bill for this destruction. Why are we still going ahead with this train line that no one wants? It’s madness!”

The timing coincides with HS2 Ltd being taken to the High Court for Wildlife Crimes. Led by BBC’s Chris Packham and backed by the RSPB, the National Wildlife Trusts, the Woodland Trust, Greenpeace and Friends of the Earth the groups comprise a membership of over 11 million people who are opposed to HS2.[3]

XR Birmingham Action @ Curzon Street – ‘Birmingham Against HS2’. Local Birmingham community members set to arrive with placards bearing mottos on this theme in a show of solidarity for the walkers departing.

→ Poors Piece Conservation Project, Steeple Claydon Camp 19:30 arrival. There will be a series of live talks from local residents and the local anti HS2 movement (details to follow here).

The Harvil Road wildlife protection camp, Harefield, Uxbridge, which has been defending the local land and water, repeatedly raising concerns over the impact of HS2 works, is facing two hearings during the Rebel Trail.

HS2 and Hillingdon council have applied for injunctions to prevent protest on a vast area of land around HS2 sites. These injunctions would help facilitate HS2’s control of Colne Valley – and enable them to continue carrying out destructive work and commit wildlife crimes without people to bear witness, ignoring the concerns of local residents who do not want HS2.

HS2 Ltd are being taken to court by wildlife TV presenter and conservationist, Chris Packham CBE, supported by evidence from the RSPB, the Woodland Trust and campaigners on the ground. The Court of Appeal granted a hearing on July 17th to decide if a full Judicial Review of the government’s decision to give the go-ahead for the controversial rail project will proceed. One of the reasons for this hearing is due to ‘the considerable public interest in the case’.

HS2 is the most expensive and environmentally destructive infrastructure project in UK history. HS2 is set to destroy 108 ancient woodlands and almost 700 wildlife sites. As well as costing an estimated £200 billion, the high speed rail project is already causing extensive and irreversible damage to the environment. It will be a vast new source of carbon emissions for at least the next 120 years, as well as enabling mass airport expansion.

HS2 Ltd has repeatedly failed to produce a Strategic Environmental Impact Assessment, despite this being a legal requirement.

The Government must scrap HS2 immediately, instead using the money to improve and invest in the NHS, and in local services and projects that adapt to the reality we face in a COVID-19 pandemic and Climate and Ecological Emergency.