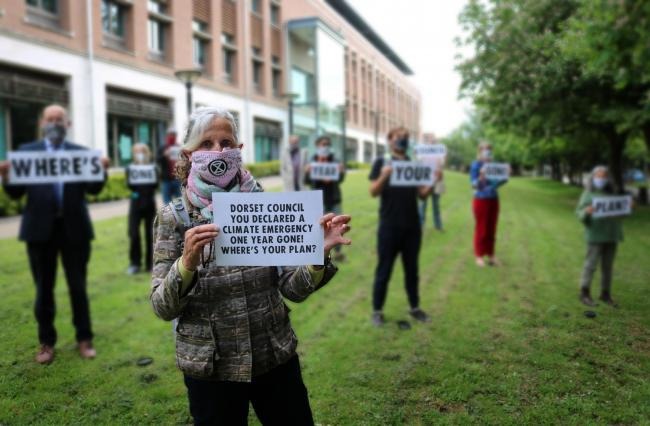 30th May 12pm: This Saturday Extinction Rebellion will be outside Parliament calling on people across the UK to publicly express their dissatisfaction with Government incompetence and demand a Citizens Assembly on the Covid-19 recovery to decide our future together.[1] The challenge of addressing the pandemic is inseparable from the climate and ecological emergency – both must be addressed in tandem if we are to secure a safe future for all.

In a socially distanced grid in Parliament Square, people will stand silently for one hour and bring their own cardboard signs with a choice for our leaders, that say “People OR profit”, “Life OR death”, “New roads OR new bike lanes” etc. The protest has been designed so that people are physically distanced at 3 metres apart, with Extinction Rebellion asking that everyone wear protective masks in order to take part. In adherence to current government health and safety guidelines, people will arrive alone or in pairs, and are being asked to only attend their local protests by walking or cycling and avoid public transport unless absolutely necessary.

Similar socially distanced protests are set to be held up and down the country – including Worcestershire, Whitstable, Birmingham, Portsmouth, Suffolk, Northampton, Dorset and Nottingham – with local groups planning actions outside local councils, MP offices, town squares or street corners.[2]

As the Government begins bailing out destructive industries that are killing us, an urgent need for a democratic, deliberative process such as a Citizens’ Assembly is needed to consider how best to rebuild our economy, our democracy, and our future – a process free from polarising party politics that puts the health and wellbeing of people and planet before profit. This is no radical ask – in fact, Citizens Assemblies are sounding more like common sense as these interconnected crises deepen.[3]

Marijn Van De Geer from Extinction Rebellion’s Citizens Assembly working group says: “We urgently need a democratic deliberative process such as a Citizens’ Assembly to consider how best to rebuild our economy for a more sustainable, fair and long term basis. This must be done outside of polarising party politics. Most importantly, this discussion needs to be held between ordinary people, not just politicians, current power holders and various special interest groups.”

The protest comes as humanity stands at a major turning point in history. In the current crisis, it has become abundantly clear that the political institutions we have in place are not capable of meeting the challenges we face. The Government has failed the public during Covid-19 – they did not listen to the science and were not willing to prepare for the inevitable. This has all been heard before with the climate and ecological crisis. With the Prime Minister more interested in protecting his advisor, Dominic Cummings, than protecting the public and defying many in his own party by refusing to sack him, there is a growing anger that the Government is unwilling to do what’s right to protect its citizens from further suffering.[4]

Paul Stephens, ex-Met Police Detective Sergeant said: “Each day it becomes increasingly evident that the Government is making mistakes that cost lives. We will come out of this crisis but at what human cost? The Prime Minister is more concerned with protecting his mate and his position than protecting the people of this country from further harm. They put GDP before emergency preparation for a crisis such as this. Now consider the climate situation that threatens us on a much grander scale than Covid-19. We cannot trust them to see beyond the next election.”

This act of defiance will highlight a refusal to go back to business as usual. There has never been a more pressing time to completely reimagine the way we live, and with much of the mainstream media joining the call to “flatten the climate curve”, and a poll out today that shows even 62% of Conservative voters want a green recovery, it’s clear that we must use this moment to secure a safe future for all.[5][6]