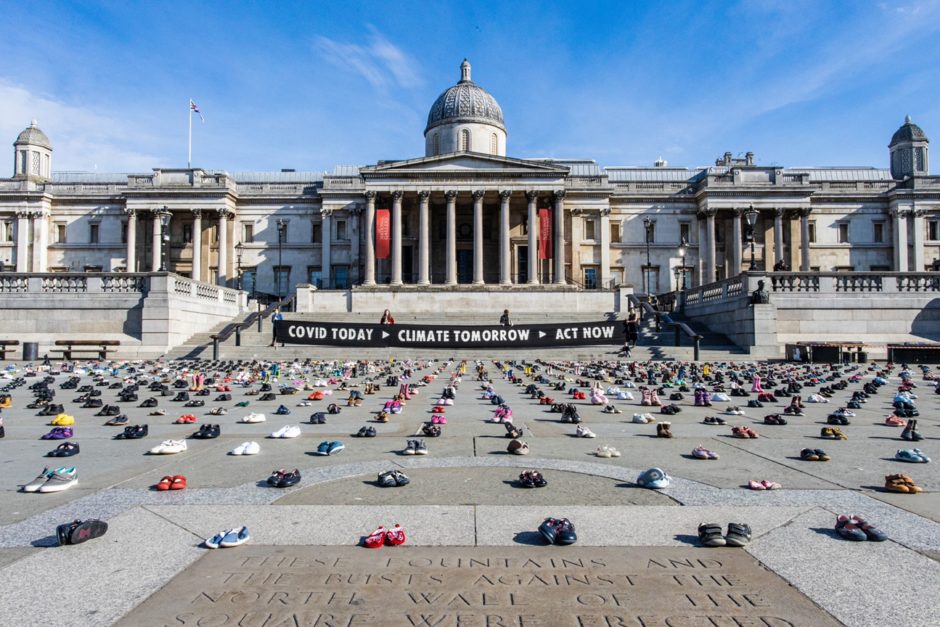 In the early hours of this morning, Extinction Rebellion has covered London’s Trafalgar Square with nearly 2000 pairs of children’s shoes, with people holding a banner that reads ‘Covid today > Climate tomorrow > Act Now’. The installation urges the Government to act on the climate crisis during the coronavirus recovery to protect younger generations against the effects of an even deeper crisis that continues to intensify.

Poppy Silk, 19, XR Youth says: “As a young person during the pandemic, I’m urging the government to be led by the science. We had months to prepare for coronavirus, we’ve had decades to prepare for the climate crisis and still not enough is being done. This has to be the moment at which we learn from our mistakes and take the necessary action to protect not only future generations, but the people living in high polluted cities and those in the global south dying now due to climate change.

“Many young people feel suffocated by fear of what is to come, and now with this pandemic maybe others will start to understand our fear for the future. This action highlights that, even whilst healing from the pandemic, we must move towards a green transition to prevent future crises.”

Dr Deepa Shah, GP from Hackney says: “We’re living through one of those rare moments in history when everything can change. British people have shown throughout this crisis how deeply we value our health and well-being. There are now multiple paths before us; we could choose to go back to our destructive past, or we could choose a future that gives our children a chance. Coronavirus will end but climate change is here to stay. Governments must act now to secure our future.”

The shoes were all donated by generous neighbours, parents and local teachers from across London who are terrified for their children’s futures, with Extinction Rebellion pledging to donate the shoes to Shoe Aid following the action. The installation was created by a small group of people who were careful to follow social distance guidelines at all times and wore masks.

The action is part of Extinction Rebellion’s ‘No Going Back’ campaign, where they have been urging the government not to bail out destructive industries such as aviation. Over the weekend Extinction Rebellion groups around the UK created pop up bike lanes in their towns and cities calling on the government to redesign cities that prioritise people’s health and well being during the recovery.[1]

During the pandemic, there have been dramatic changes to the way we live in order to keep us safe and we have been shown what’s possible if the political will is there. However, the government failed to listen to expert warnings and prepare for what’s to come, as they are doing with the climate and ecological emergency. With eco-anxiety rapidly growing among young people and action on climate change likely be pushed back because of the pandemic, there has never been a more glaring opportunity to protect the lives of young people and address both.[2][3] As Bill Mckibben of 350.org said last week, “One crisis doesn’t stop because another starts.”[4]

The installation comes as lockdown begins to ease in the UK and the government makes moves to go back to business-as-usual. However, it has become clear that the general public desire a change of direction, with only 9% of the population wanting to go back to the way things were before the pandemic, and 48% agreeing that the government should respond with the same urgency to the climate and ecological crisis as the coronavirus crisis.[5][6]