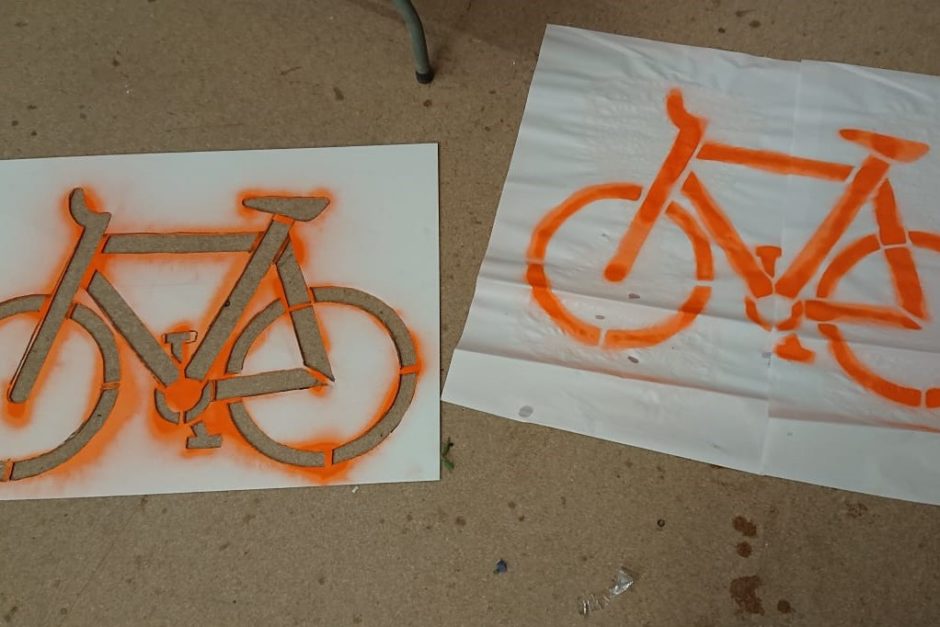 16-17 May: Extinction Rebellion to create pop up bike lanes and say ‘No Going Back’ to busy, polluted streets as lockdown eases

This weekend Extinction Rebellion groups across the UK are inviting people to ‘Reclaim the Streets’ and join them in peaceful, physically distanced protest in their towns and cities. They are calling for the government to prioritise public health and well-being as the UK lockdown is eased and to invest in safer streets for walking and cycling.[1] Groups taking part include Islington, Lambeth, Hackney, Exeter, Staines and Manchester.

Beginning on Saturday 16th, groups around the UK will be reclaiming streets by painting stencils of bikes in normally congested, polluted areas with non-toxic paint or chalk, to create their own pop up bike lanes, inspired by activists around the globe.[2] This will be followed by a physically distanced bike ride the next day to ride the newly reclaimed streets.

Although the group welcome the government investing an emergency £250 million to widen streets and bring in temporary bike lanes, Extinction Rebellion says the move doesn’t go far enough. Not only will towns and cities need to make huge changes to allow people to safely socially distance, with the Climate and Ecological Emergency intensifying the depth of the change needed to make cities climate resilient is far bigger than any local government is taking into account, says the group. They are demanding a citizen’s assembly to decide how our cities should be redesigned in light of these interconnected crises, saying there has never been a more pressing time. The groups intend to highlight the depth of the problem on our streets this weekend.

The protest comes as the nationwide lockdown begins to ease with emissions expected to rise sharply as roads begin a slide back to business-as-usual after the last two months of cleaner air in our towns and cities. Extinction Rebellion are saying No Going Back to polluted, busy, toxic streets – as are the public, with only 9% of people wanting to go back to the way things were before the pandemic hit.[3]

Louise Wass, 56, London resident and cycling campaigner said: “This is the time to reimagine our streets. The increase in air quality is tangible to all. We can’t go back to the pollution we had before where cars are king. It’s time to share space equitably; putting people and the planet’s health first. Enabling our children to walk and cycle in the way we did will make our cities and towns thrive with life.”

Caspar Hughes, 48, of Stop Killing Cyclists said: “Spending £27bn on a road building program during the dual climate and coronavirus crisis, is suicidal. A simple way to reduce transport emissions is to make cycling convenient and safe. 70% of all journeys are less than 5 miles in the age of e-bikes virtually everyone can cycle such a distance.”

Rosalind Readhead, 58, 2021 London Mayoral candidate, says: “There is a huge gulf of understanding between what the Prime Minister is saying we need to keep us safe and what our local authority understands. Without the proper social distancing measures on our streets Covid-19 will spread. This could lead to thousands of unnecessary deaths.”

The actions will not involve blocking roads or limiting road use, but will open them up to everyone. Groups are giving briefings on how to remain safe, advising people to wear face masks and to paint the streets early in the morning so there is less traffic on roads that have been carefully considered, and in small groups in order to safely socially distance.

The truth about cars

Whilst cars rule the roost on our roads, a quick step down history lane unveils that it hasn’t always been that way: Bikes were there first.[4] The question now stands, do we want to return to the poisonous and polluted roads designed to prioritise traffic or is there a different way that prioritises our health and wellbeing?

Whilst we welcome the government’s investment of £400 million annually for cycling and walking is far from the £6billion – 20% of the Department for Transport budget – the UN says should be spent annually on safe cycling.[5] Pollution, mainly coming from transport, is responsible for killing around 40,000 people annually in the UK and has already been linked to making people more susceptible to Covid-19.[6] Sadly the impacts of air pollution cut lives short. [7]

Even if the public transport network was running at full capacity, only one in 10 people would be able to travel while keeping to social distancing rules. [8]

[3] Only nine per cent of Britons want to return to life as normal after the end of the lockdown – https://www.independent.co.uk/news/uk/home-news/coronavirus-uk-lockdown-end-poll-environment-food-health-fitness-social-community-a9469736.html

[8] Even if the public transport network was running at full capacity, only one in 10 people would be able to travel while keeping to social distancing rules – https://www.bbc.com/news/amp/uk-52642222