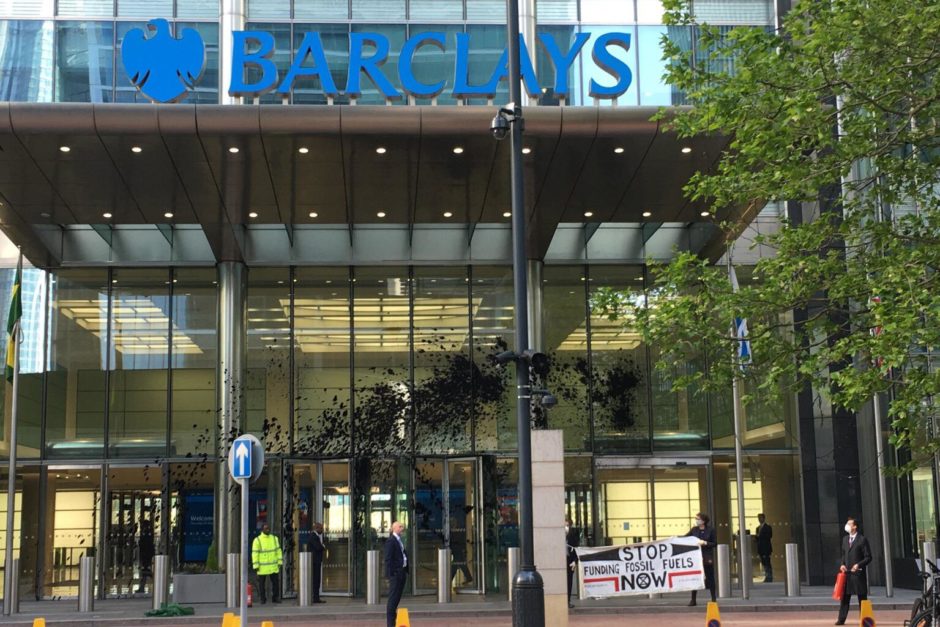 BREAKING: Extinction Rebellion spray fake oil onto Barclays HQ calling on them to act responsibly and divest from fossil fuels

A small group from Extinction Rebellion have sprayed fake oil onto the Barclays headquarters in London’s Canary Wharf this morning with fire extinguishers. They came with a simple message, for Barclays to act responsibly and ‘Stop pouring billions into the fossil fuel economy’. The protest has taken place on the morning when Barclays shareholders will meet virtually for their annual general meeting (AGM).

The group of 3 people took care to socially distance by staying at least two meters apart and wore face masks, carrying a banner with the words “Stop funding fossil fuels NOW”. They are demanding the bank work with governments to make sure the economic devastation brought by the coronavirus crisis is not in vain by resetting the skyrocketing trajectory of emissions for good, with an accelerated transition to a zero-carbon society that supports people and planet. With oil prices being at an all time low due to the pandemic, now is a time for investors to show courage and do what’s right.

The ‘oil’ used was completely biodegradable, vegan, and is easily washed off.

Extinction Rebellion spokesperson, Donnachadh McCarthy said, “It is unconscionable that Barclays Bank is using Britons’ bank accounts to invest in the very fossil fuels destroying us. Barclays must end all new fossil fuel investments immediately and instead fund the renewable green Covid-19 recovery that will give the millions of Britons losing their jobs due to the pandemic, hope for a positive future.”

In January, an influential group of Barclays Shareholders, represented by ShareAction, tabled a motion to phase out all fossil fuel investments. This will be on the table at the AGM on Thursday 7th May. Activists hope to influence the motion with action both on the street and online.

People are being encouraged to join in the protest online and ‘swarm’ Barclays’ social media today from 11am, by tweeting at the bank with one of the following hashtags: #FossilBanksNoThanks #Divest #KeepItInTheGround #DontBankOnBarclays, #NoMoneyInOil, #FossilFuelIsDead. This action will be aimed at shareholders, big business investors and Barclays, as these are the people who will either be voting at the AGM or will know people who are.

Barclays is the biggest funder of fossil fuels, not just in the UK, but in the whole of Europe, having invested $118 billion (£95 billion) into fossil fuels between 2016-19, ahead of the UK’s second biggest fossil funder, HSBC, who invested $87 billion (£70 billion) during that time. Barclays have committed to a carbon neutral date of 2050 – a commitment designed purely to enable business as usual – however, they have given no commitment to stop fossil fuel investment in order to reach this target.[1]

Katrin Ganswindt, Energy & Finance Campaigner at Urgewald says: “UK banks are driving the global fossil fuel expansion forward. Barclays and Standard Chartered need to work out their fossil-exit plans if they want to avoid completely embarrassing themselves at COP26. A good place to start would be to no longer provide financial services to companies expanding their fossil activities.”

Since 2016, Barclays has provided $7.4 billion in financing to companies building new coal power plants. The coal companies supported by the bank since the Paris Agreement are responsible for 120 Gigawatts of already installed coal-fired capacity. Barclays is also invested in coal companies with expansion plans: the coal expansionists in Barclays’ portfolio are planning to add a total 58 Gigawatts of new coal-fired capacity to the global pipeline.[2]

Barclays’ investments are just one prominent example of a system that places mindless fossil fuel-powered economic growth above the survival of life on this planet. It is time to change our economic system to one that prevents harm and puts people and planet above profit.