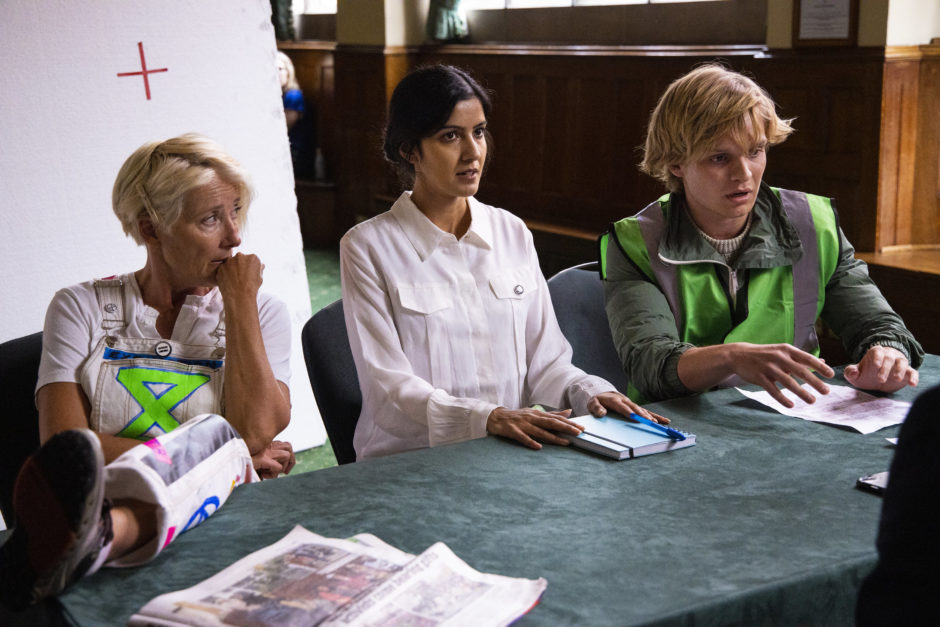 At midday on 1 May 2020, Extinction will be released online to mark the anniversary of the UK becoming the first country in the world to declare a climate emergency. The short film tells the story of a small group of determined activists, who – in the midst of a rebellion – are invited to meet with the Environment Minister, Lord Grant.

Emma Thompson said: “Everything depends on what we do now. In a crisis, you have to convince people to take positive and immediate action. The suffragettes taught us that. You have to be active in your disobedience.”

“I hope this film makes protest seem as useful and as maddening as it is. I hope it illustrates the frustration of trying to get through to government officials who can’t hear anything but the sound of their own voices”.

Last year, after a fortnight of continuous protest by Extinction Rebellion, the UK became the first country in the world to declare a climate emergency. Over 1,100 people were arrested for taking part in the April rebellion in London, and over thirty countries took part in protests across the world. Following 11 days of protest, a small group of activists were invited to meet representatives from the Government and the Shadow Cabinet, and the next day the UK Parliament declared a climate emergency.[1] Extinction was shot during the protests last year.

The director, Jack Cooper Stimpson (Alex’s Dream), said: “Writing and directing this film has served as a totally unique entry point into the climate movement. What started off as research fast became a passion. I hope the film goes some way to describe the chaos, the anger and the humour that fuels this extraordinary movement. We must continue to provoke change through the stories we tell and, in doing so, place the fight for climate justice at the centre of everything we do.”

“It was important to us that the film was made in a green and sustainable way. The film industry can, and must, change the way that it works, and we – as artists – have a responsibility to show that.”

The co-writer, Sam Haygarth (Jojo Rabbit, The French Dispatch) helped to coordinate the political strategy of Extinction Rebellion during the April Rebellion and was one of the activists who met with the Environment Secretary Michael Gove in April 2019.[2] The film was written several months previously when nobody could have known what was going to happen.

He said: “A year ago, I was on top of a big pink boat in the middle of Oxford Circus. Thinking about that now, it feels like a fantasy. But it was real. It happened. Like any movement, we made countless mistakes. We got things wrong and we needed to change. But we also proved that civil disobedience works. We woke people up. I hope our film is a fitting celebration.”

Extinction implements new tactics to keep the carbon footprint of the production as low as possible. The transport was limited to only the essential daily trips and key members of cast and crew used public transport to get to work each day. Costume was sourced from sustainable and vegan brands who were keen to support the messaging of the film. The catering provided was also vegan and from a restaurant with a sustainable production line. The crew was gender balanced. Emma Thompson made her own costume.

Producer Henry Rouquairol said: “Working on this film really highlighted the urgency of climate change to me. It is great that parliament declared a climate emergency last year, but unfortunately not much has been done to tackle the issue since. Hopefully, this film in whatever small way can reignite the debate again.”

A full press pack is available here. Please get in touch if you want to arrange interviews or need more information. The film will drop at exactly 12:00pm. BST on 01/05/2020 here.

Following the release of the film, there will be a panel discussion “The Role of The Arts in A Crisis”, with the team behind the film and arts industry activists on Sunday 2nd May at 6pm. Go to the Extinction Rebellion Facebook page to view.