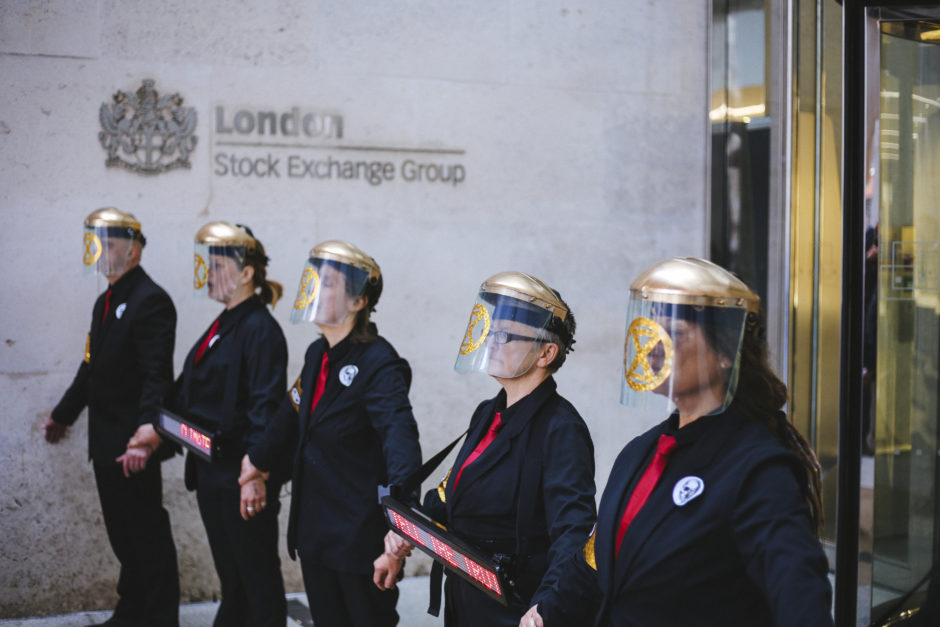 In Pictures: Taking the Stock Exchange

The last day of the April Rebellion saw a series of audacious actions throughout the City of London. First time activist Sian Vaughan donned a Robocop outfit to help disrupt the London Stock Exchange.

I came to London last April as a first time activist – I’m an ex primary teacher and headteacher who’d been enjoying a quiet early retirement on the beautiful  Pembrokeshire coast.

I was arrested on Oxford Circus at the end of the first week, but I still had a week to go and I wanted to do more. I was glad to be part of this action at the London Stock Exchange. I want to shake people into realising that human systems, unlike the physics of climate change, can and should be changed to serve people better.

Since then, I’ve been involved in my local group, given talks and facilitated training for other rebels and taken part in various actions including in Cardiff in July, the Brazilian Embassy in August and throughout the October Rebellion in London.

We did shift the conversation and even shifted the government, if only into their first slow steps, but now, with this terrible Covid 19 pandemic, it’s in the balance.  Governments will soon be spending and steering either backward to business as usual or forward to a better future for everyone.