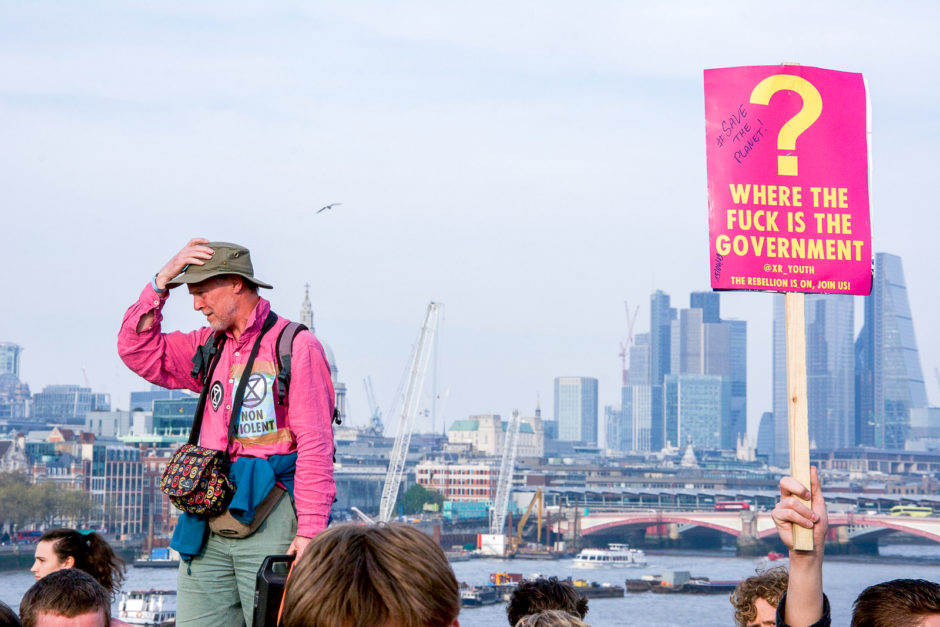 Although the UK Government now accepts there is a climate and ecological emergency it still refuses to take radical action. It’s a political choice, as recent events have proved. By Sarah Lunnon of XR’s Political Circle

Easter Sunday April 21st 2019: We all know Waterloo Bridge is soon to be cleared. The noise and fumes will return. But before that happens, under a rising full moon as the sun sets, the garden bridge is saying goodbye to the activist lawyer Polly Higgins, who had died earlier in the day. The songs that can be heard mix with the tears of those who knew her, her work and her sacrifice. There is a feeling that although it is time to let go of one place, we will do it to occupy the hearts and minds of our communities. We understand that if we fail, life on earth will pay the cost of that failure.

A week earlier, with Parliament in recess and the Brexit arguments that had engulfed the country temporarily halted, Extinction Rebellion had stepped into the vacuum. XR’s concerted mass non-violent direct action saw people from all walks of life coming together to demand politicians begin the process of planetary repair. We weren’t alone. Children with the School Strikes movement spoke about their fears of a future, while David Attenborough detailed the devastating impact of humans on the natural world in Climate Change – The Facts.

Suddenly, a series of apparently impossible demands were being made of national governments and the terms “climate emergency” and “extinction event” were commonplace.

Waterloo Bridge was eventually cleared later that evening, and the April Rebellion brought to a close four days later, but the political impact of the 10 day rebellion was immediate. On May 1st, the UK Parliament declared a Climate and Ecological Emergency; the Committee on Climate Change’s ‘credible’ net-zero target of 2050 was adopted by the government; and six select committees set up a Climate Citizen’s Assembly.

But while the government may appear to be acting, the scale of response required is of a different magnitude. As things stand, we are pinning our hopes on the unicorns of Carbon Capture and Storage to come along and save us. We have massively inflated the carbon budget to enable the economic status quo to continue. And we are crossing our fingers that the positive feedback loops – recognised but unquantified and so excluded from the 2050 zero-carbon budget  – will fail to materialise. (A heads up: They will. Wishful thinking will not protect us).

And yet, over the last three months, unbelievably radical act after radical act has been undertaken by nation states, mostly unilaterally. Country after country has effectively closed down its entire economy underwritten by its national bank. Citizens have taken extraordinary action, mutual aid groups have proliferated, people have been volunteering at hospitals, neighbours supporting neighbours. Internationally, nationally and locally we have witnessed unimaginable change. What was once inconceivable has become the norm. The collective recognition of an urgent threat has enabled us to accept what previously would have been impossible.

Coronavirus has shown us that in the face of immense risk, states and citizens do act. Now we know what can be done we must demand such a response to reduce the incalculable risk of harm from the collapse of the natural world.

One of the legacies of April’s rebellion is that just about everyone now accepts there is a climate and ecological emergency. The resistance from politicians to the radical action demanded by Extinction Rebellion is not because it isn’t required, but because it isn’t possible. ‘We can’t act unilaterally and crash our economy’, is a common response. Or, “It’s unrealistic to reach zero-carbon by 2025”.

The national and international responses to Covid-19 shows the failure to act on the emergency to the natural world as the political choice that it is: A choice that gambles the future of our children against the short-term return of economic growth.

Just as Covid-19 has had a devastating impact on manufacturing, transport, stock markets, employment, and on the daily existence of billions of people, so too will the devastation of our natural world, which will also tear families apart, limit access to medical care, and threaten food supplies.

The need to change the system, from one of harm to one of repair, is clear and urgent. Now we know what can be done: We can stop flying overnight, bike lanes can appear immediately in city streets, major companies can immediately change direction, and factories can be instantly repurposed. Nothing now is normal. Let us not pretend it ever will or should be again.