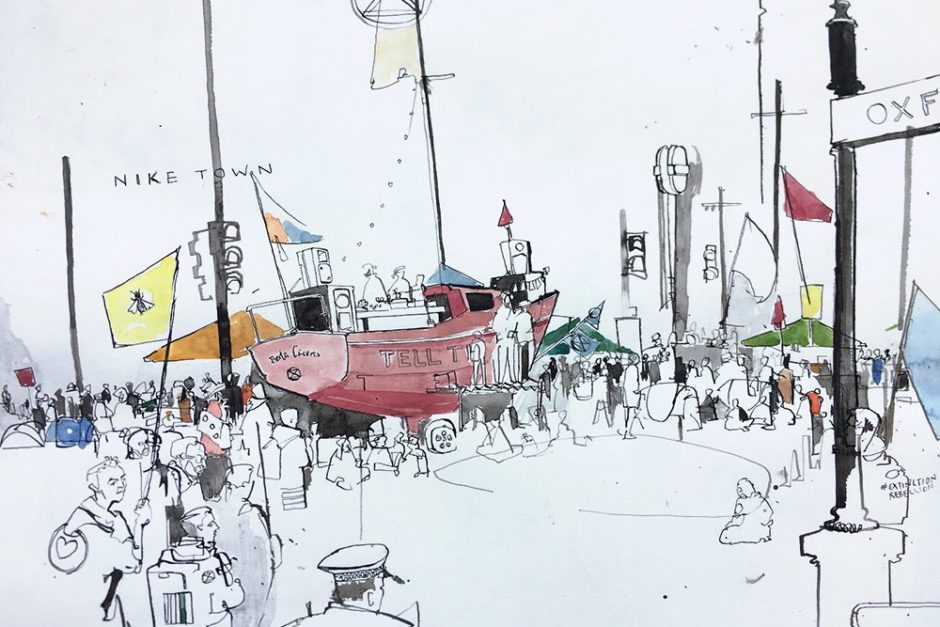 We Were The Boat: The Inside Story of an April Icon

Over the ten miraculous days of the April Rebellion, London became host to some truly surreal and spectacular sights. But surely the most iconic of them all was the pink party boat moored to the tarmac of Oxford Circus.

With DJs on the deck, barnacles locked-on to the keel, and a sea of rebels dancing and leafleting and making speeches around its hull, the boat represented the entire XR ecosystem in one heaving, joyous, living entity.

Police officers danced, celebrities dropped in, love was in the air, and DJs played the sets of their lives – a 5 day rebel rave under summer skies that drew in thousands, was broken up peacefully, and where not a drop of alcohol was drunk.

How did such a beautiful, mad, impossible thing like that happen?

The truth is, it so nearly didn’t.

The boat idea started out as a modest affair. The vessel would be as cheap as possible and the backdrop to a more traditional stage. The close-knit team of Rebellion organisers started asking around for ships in mid-February and traced a big old wooden one for free. Job done.

Then a week before the April Rebellion, the wooden vessel fell through. The organisers had no choice but to frantically start shopping for boats online.

But they were bid-shy in the eBay auctions and when they eventually did settle on one they liked, one rebel with a slither of sailing experience, who we shall call J, was inspired to speak out.

“The boat was whack! It was cheap but it was all wrong.”

From hereon, with just 7 days to go, it was J who took on the boat project. He knew it had to be a sailing boat not a motor boat. And he knew it needed to have a big keel so it would sit up high on its trailer and everyone would be able to see it.

“I had this image in my mind of a big sailing yacht with the heads of the people in the crowd reaching the waterline so it looked like it was floating on a sea of people.”

The fated auction for the pre-pink boat.

J put low-ball bids on ten sailing yachts and karma played its first beautiful hand. The seller of one of the boats had cocked up his auction, setting it to end far sooner than he intended. J’s low-ball offer won and the 21ft vessel was his for £750 – a third of the going rate.

Better yet, while the other ships needed picking up from places like Falmouth, or Scotland, this one was in Wembley.

J and two other rebels went to check out their new purchase. There had been fears the yacht would prove too small but on first sight, all three fell deeply in love with it. The seller proved to be a decent man-of-the-sea who honoured the bargain basement price. But he was, quite rightly, suspicious.

“We were scared to tell him what our plans were for the boat so we decided to pretend we were sailors. When he took us into his workshop to show us the bag of sails, I remembered to sniff the bag for mould. Luckily, this convinced him. ‘Okay, you’re a real sailor,’ he said.”

The seller then agreed to tow the vessel to the XR yard in Manor House for a couple of hundred extra. It was a crucial offer that gave the team precious extra hours to prepare.

“Everything about this boat was karma.”

With the boat delivered and just four days to go, a 20 strong crew of rebels separated into 4 teams and began an intense and near-continuous few days of readying the vessel for drop off. The barnacle team began lock-on drills. The technical team sorted the sound system. A carpentry team started building a DJ booth on the deck. And a two person art team arrived to paint the vessel.

J knew the entire boat would need to be one colour to make it ‘pop’, but was undecided on the hue. Maybe it could be baby blue? Or pea green? He asked his art team, and in unison they both shouted “pink!”. It proved to be a controversial but ultimately legendary choice.

By now J was sleeping on the boat, and the vessel was being covered in tarpaulin as much as possible.

“We didn’t know what the police knew and there was a fair amount of paranoia among the team – particularly whenever a helicopter passed overhead.”

At the time no one was expecting the boat to last more than a few minutes out in public, and a major concern was getting the tarpaulin off before the police carted it away.

As the only person on the team with sailing experience, J had to drill 3 rebel helpers to get the tarpaulin off, a ladder up, and the mast raised with lightning speed once the boat was moored.

The last action in particular needed to be executed perfectly. A 35ft metal pole falling onto the commuters of central London could ruin the Rebellion before it had even begun.

When the morning of Rebellion came around, tensions were understandably high – not helped by the fact that for reasons still unknown, the boat arrived at Oxford Circus an hour and a half late. But arrive it did, and the teams launched into action. Everyone went into a glorious, adrenaline-fuelled autopilot and executed their roles perfectly. Except for J.

“I was meant to bang on the back door of the tow van when the boat trailer was detached, but I jumped the gun! The power cable for the trailer lights, a really chunky cable, was still attached! Luckily another rebel just happened to be there to quickly unhitch it before the van sped away.”

As J and his team heaved the mast vertical a huge cheer rang out across Oxford Circus – a cheer too loud to have come from just the protestors on site.

“Hearing that cheer was one of the best feelings I ever had”.

The rest, as they say, is history. The music boomed out until 10pm that first night, the dance floor really got going the following afternoon, and the beats kept pumping for an improbable five days.

Asked to sum up those heady days living atop a sea of revellers, J painted this scene…

“On the deck the music is so loud you have to shout to communicate, and the whole vessel is shaking. You can’t hear yourself think, but your phone keeps buzzing with calls from other organisers. You look out at the sea of people and it is like a full on rave, except every now and then you see this file of bright yellow, and it darts into the crowd like a shark, grabbing someone and dragging them away. The police, they come in waves and you can see them amassing from streets away – van after van pulling up, officers approaching for another hunt, and yet each day, somehow, we survive!”

The story of the pink boat is too rich to tell here in full, but there’s one more question that needs to be asked. Where is the pink boat now?

The answer, it seems, is a police pound.

Every now and then a notice is sent to XR’s lawyers where the police threaten to destroy the boat unless an owner comes forward. The last notice was 6 months ago. Technically and legally the boat belongs to XR. It was bought with XR money. But J did offer to go and collect it. The group decision was not to bother.

Since April last year, J has bought another 6 boats for XR protests, and it is believed the green one from the XR summer event is now impounded beside the original.

At least that beautiful pink boat isn’t seeing out its retirement alone.