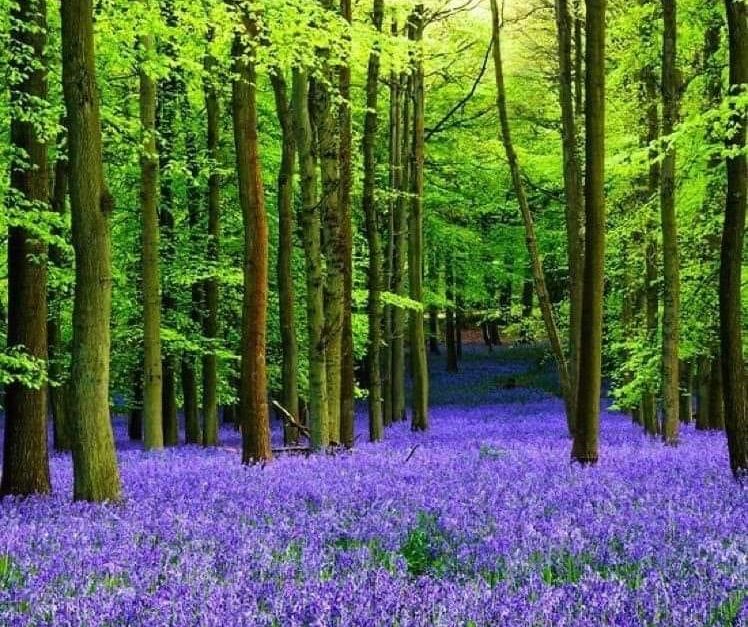 Photo above from Broadwells Wood Warwickshire in May 2019. Will there be bluebells this year?

With the release of those arrested at Crackley Woods yesterday for protecting trees at risk from HS2 works, Extinction Rebellion Midlands gives us an update on what’s been happening. If you’re at home and would like to support, check out the Risky Business Action, tweet/post using #NHSnotHS2 or donate to the tree protectors’ Fundrazr campaign.

Extinction Rebellion Midlands would like to thank those who, during this difficult time, are trying to protect trees from being felled by HS2 contractors. We also want to express our deep dismay at the High Court’s decision yesterday (Friday 3 April) to green light this decimation of ancient woodlands in Warwickshire and Staffordshire. Naturalist Chris Packham had asked for an emergency injunction to stop works during the fragile bird nesting season, but his plea was rejected.

While health workers have been pleading with the nation to remain in their homes, HS2 contractors have been travelling from across the country to woodland sites in Kenilworth, Warwickshire. The West Midlands is a reported hotspot for coronavirus. Residents there fear that the workers, who have been regularly filmed breaching social distancing guidance, will spread coronavirus as they visit local shops and stay in local accommodation.

“The NHS is facing its greatest challenge and yet the government is wasting over £100 billion on HS2,” said Suzanne Savage of Extinction Rebellion Midlands. “It is utterly reprehensible that our frontline health workers are going without adequate PPE and basic testing kit while money flows endlessly into the spiralling costs of HS2. We say choose life rather than HS2.

“The government has declared that all non-essential work should be halted during the coronavirus emergency, yet with this High Court ruling HS2 is set to continue its spree of wildlife crimes as it destroys ancient woodlands. This means the people around Kenilworth face the prospect of the sound of chainsaws felling trees near their home any day now while adding to their fears about coronavirus.”

The ancient woodlands threatened by HS2 are the remnants of Shakespeare’s Forest of Arden, which once stretched from the River Avon to the River Tame. These pockets of history are precious to people across Warwickshire and the Midlands.

A group of campaigners – supported by Extinction Rebellion – had been living in treehouses within Crackley Woods, Kenilworth, for nine days to halt the destruction, facing daily eviction attempts by the National Eviction Team and HS2 security. Having been denied food and water throughout, they were forcibly removed during Friday’s hearing. Overall eleven people were arrested, with six of those having been in trees and five others on the ground. All have been de-arrested or released on unconditional bail. It is noteworthy that all past arrests connected to peaceful protesting against HS2 have had their charges dropped or been found not guilty.

The tree protectors have returned to the camp at Crackley Woods HS2 site, and together with locals they vow to continue protecting the area.

After the emergency injunction to halt HS2 works was rejected, Chris Packham recorded an emotional twitter post expressing his concern for the protestors . Chris also said he will consider appealing Friday’s decision when the judges publish their written reasons for the verdict on Monday.

In her reaction to the ruling, RSPB England Director Emma Marsh described the HS2 project as ‘worst practice’ in environmental conservation and urged the public to report any evidence of active nests being destroyed to the police. Darren Morecroft, CEO of the Woodland Trust underscored Marsh’s dismay: “This decision is catastrophic for these irreplaceable ancient woodlands and the hundreds of species that call them home. Instead of bursting into life they will now be destroyed.”

Although railways are often considered to be environmentally-friendly, HS2 have admitted that the line would never become carbon neutral over its 120-year projected lifetime. It will also facilitate regional airport expansion. This is completely at odds with the rapid carbon reduction necessary in this climate and ecological emergency.

“It’s devastating to realise what very little change there has been amongst the ‘decision makers’ in the comprehension of the emergency we are facing,” said Caroline Thompson-Smith of Steeple Claydon in Buckinghamshire, a witness in Friday’s court case. “It is vital to look after our environment and do everything we can to mitigate climate change. Infrastructure projects of this scale have no place in a world where carbon budgets should be considered at least as important as financial budgets.”

“All these wonderful woodlands in bird nesting season are at risk,” said local resident Matt Bishop. “The tree protectors have done so much to hold this ugly power of HS2 at bay. Hopefully Chris Packhams’ team can appeal and get a full and proper judicial review. We fight on. Please keep supporting us.”

It still remains that HS2 doesn’t have Notice to Proceed, and is the most expensive and destructive infrastructure project this country has ever seen. Extinction Rebellion calls on the UK government to immediately stop HS2, and instead to properly invest in the NHS, communities and nature.