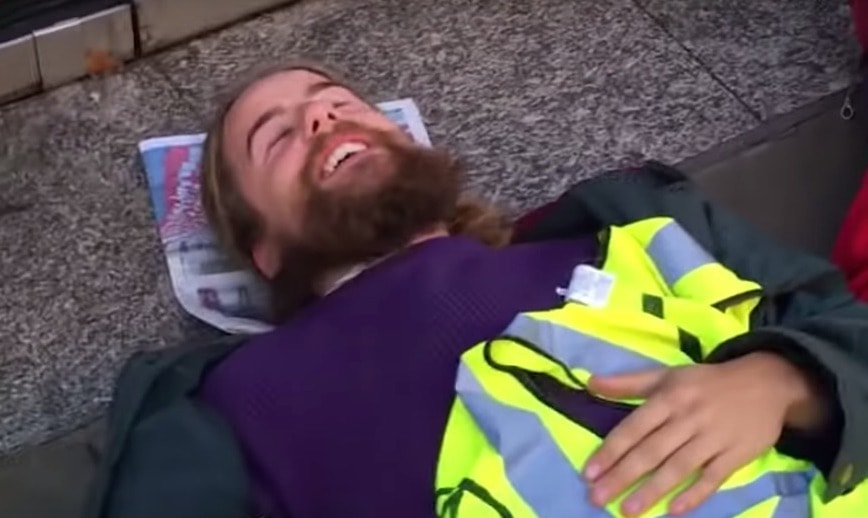 Unsung Heroes of XR: Felix – A rebel-alchemist of the April Rebellion

In today’s Unsung Heroes, we meet Felix. A long-time environmental activist, boater and rewilder, Felix describes his involvement in XR as episodic: “because I have random work hours and I am a boater – and I am often geographically distant from any given group – I don’t have a regular role in XR. I do my own thing. But when it’s action time, when it’s time to physically help out, I will go all in”.

Though you may not see Felix at your weekly local meeting, he is no less committed to the movement for it.

He has, in fact, been involved in XR since the very first action. He recollects: “This was a non-arrestable action, a swarm in Leicester Square. Roger started putting people into groups ‘ah you’re from East London, go and stand by that tree…’”.

“These were the first affinity groups,” he continues, “Three-people affinity groups! It was a bit mad. For the action, literally 20 people turned up. Eleven people blocked the road, and two policemen turned up, looking puzzled: ‘What the hell are you doing?’ We explained and they just said ‘OK, knock yourselves out’, and they walked off.”

These numbers now seem derisory but, Felix comments, “I would not have missed that for the world. I’m really proud to have been part of that. Very much so.”

Felix was also one of the first arrestees in October 2018 at Parliament Square. He explains that until the day prior to the action, he had no intention of getting arrested. He then had a change of heart: ‘‘f*** it, this is too important!” he thought. “But very few rebels had done it before that point, so it was scarier to get arrested.”

The novelty of the actions also means that rebels – even with the backing of social science – could not be sure their action would have much of an impact. But impact these early actions did have, and they created the grounds for the movement to grow beyond expectations into the April Rebellion.

Perhaps here we could pause an instant and recall those two exhilarating weeks almost one year ago now.

Whatever April 2019 conjures up for you – the beautiful ‘Garden Bridge’, skate-boarding police officers, rebels kettling kettles, breathable air in central London – without the involvement of rebels such as Felix, these memories might not have been with you today.

Let us not even mention the political impact of occupying London for 11 days, and the sea change in public discourse around the environment that followed the April rebellion.

So what was the nature of Felix’s involvement during April and why was he so crucial? There is no delicate way of putting this: his job at the time largely involved “dealing with piss” – along with other human waste products.

For the two weeks of Rebellion, Felix was overall coordinator for sanitation and site coordinator for sanitation at Marble Arch. He helped ensure rebels had access to untainted water, showers and bins; he created compostable toilets on site and arranged for the waste to be removed and suitably disposed of. How rebels would have held out without these basic necessities is anyone’s guess.

This, he admits, was backbreaking work: emptying compostable toilets, “an interesting job… a messy job”, into blue six-gallon barrels, “really heavy things”, and hoisting the barrels containing human manure into a van that was then driven across London to Lea Valley organic fruit and veg growers. At Rebellion’s peak, this needed to be carried out daily.

Not a particularly glamorous job. Felix, however, managed to turn the management of human waste into an opportunity for creating beauty.

He recalls for us, in delightful detail, how he created toilet doors out of solid oak flooring that he had found, discarded, in London’s Islington: “I was most happy with this one toilet structure in Marble Arch: I made a shiplap front door out of that with this wonderful oak – a luxury toilet for rebels!”

“Also for that one I put a green roof on the top. It was supposed to spring up with wildflowers during Rebellion, but we weren’t around quite long enough. It happened a few days after the end of Rebellion!” “What a sight this would have been,” we comment, “I know, green shoots, green shoots everywhere!” he pictures, fondly.

Not, unfortunately, the solid oak-fronted toilet – but an impressive creation nonetheless

There is no denying that this role was challenging and brought Felix its share of stresses and worries – at the outset, for instance, when it wasn’t clear that rebels would have access to clean drinking water, or when the vans transporting materials essential for Rebellion were delayed on their way through the city. “This was all very stressful and mad”.

“What helped you carry on?”, we ask Felix. “The sheer willpower, the amazing skills and knowledge of everyone else around me who immediately, whenever there was a difficulty, chipped in. The amount of dedication in XR is mind-blowing,” he continues, “people will drop everything and come and help you, to deal with urine or come to a warehouse somewhere in South-West London to dismantle a toilet structure, all of a sudden.”

It seems to us that Felix could well be speaking about himself here. He is also one of these invaluable rebels who will do whatever needs to be done: “if I know something is coming up through my contacts, I’ll just ask ‘where do you need me?’” This goes a long way towards explaining his role during April last year.

And so we are left a little confused as we think back on our encounter with Felix: are we most awed by his willingness to make himself available whenever needed; to do whatever is needed, even if this means having to tackle the least pleasant tasks of rebellion – or is it his ability to make something beautiful out of a task that many would prefer to avoid that impresses us most?

Perhaps it is all of these.

And then it strikes us: clearly, Felix, and others like him, who have the uncanny skill of transforming trash into treasure – these are more than just dedicated, hard-working, handy, rebels: they are the invisible alchemists at the heart of our movement. And surely, without them, it would not only have that much less staying power – it would also be that much less beautiful.