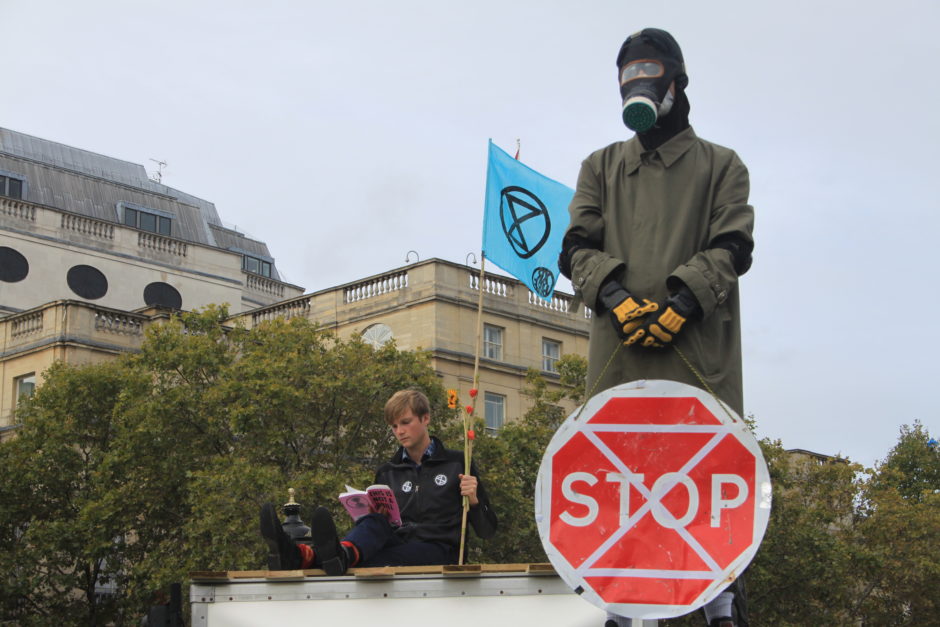 News bulletins from a rebellion in full swing. As time runs out to act on the climate emergency, Rebel Despatches brings an alternative media perspective on the pressing issues of the week, with updates from the latest actions and interviews with the rebels involved.

In this week’s Rebel Despatches with Anna and Marijn we hear from XR’s Reactive Team’s Jeremy Parker who talks us through what the Reactive Team does as well as the recent mass mobilisation training that took place in Birmingham. We are then joined by two students Sol and Sarah who’ve come straight from the ‘Time’s Up, Imperial!’ protest, a university protest and occupation at Imperial College London, which is part of a wider protest aimed at universities telling them to stop investing in fossil fuel companies and to decolonise their institutions. We then talk about citizens’ assemblies in view of the last weekend of Climate Assembly UK coming up at the end of the month and XR Birmingham’s panel on why the 2050 target for zero net carbon emissions is too late and other problems with Climate Assembly UK.

Join Rebel Despatches for the latest from the Rebellion and the Climate and Ecological Emergency. Marijn and Anna talk to Juliana Westcott from XR Families to find out the latest about 40 Days of Action, we’re on the phone to XR Cambridge to talk through their week of local actions and we look forward to the start of the big action at the Bradley Open Cast Coal Mine in County Durham which is planning on expanding its operations. Anna and Marijn are wondering if people are starting to see the light: a JP Morgan report revealed their concern about climate change and a former UN Climate Chief is now calling for civil disobedience.

Join Marijn and Anna for Rebel Despatches where you will hear the latest from Extinction Rebellion and news about the Climate and Ecological Emergency. First guest is Louise Gray from XR Wales and the Political Circle with an update about the plans for a Welsh citizens’ assembly on climate change. Anna and Marijn then discuss the developments of the week so far, including the launch of COP26 and the ‘Enough is Enough’ campaign by Nick Ferrari which would see XR protesters water cannoned off the streets. We are then joined by David from XR Glasgow with updates from Rig Rebellion all over Scotland and the upcoming Blue Wave action in Glasgow.

Join Marijn and Danny for Rebel Radio’s first Rebel Despatches brings you current events around the climate and ecological emergency – so much happening this week we’re giving you quick updates on the Climate Assembly UK, the controversy surrounding a Prevent leaflet naming XR as an extremist group and the latest actions around threat of ecocide by HS2.