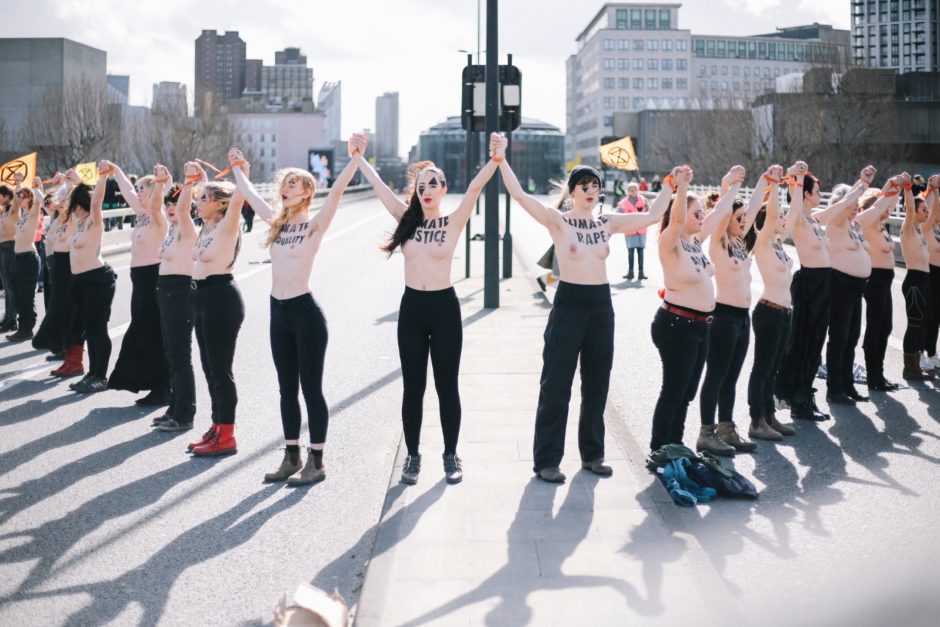 Climate is a women’s issue: Women across the world say ‘NO!’ to climate inequality

At 11am on Sunday March 8, International Women’s Day, a group of 31 women formed a topless chain across Waterloo Bridge – also known as The Ladies Bridge as many of the welders, stonemasons and labourers that built the bridge during the second world war were women. The women were naked from the waist up to symbolise the vulnerability of women around the world in the face of climate breakdown, and had the words ‘Climate Rape’, ‘Climate Murder’, ‘Climate Abuse’, ‘Climate Inequality’ and ‘Climate Justice’ written on their bodies. The women taking part include mothers and grandmothers, journalists, teachers and careers advisors.

The action highlights the disproportionate impact of the climate and ecological emergency on women, and the resulting increase in hardship, violence and rape. Protestors called on women in the UK to recognise this is happening to our sisters in the global south now, and will be a reality faced by all women if decisive action is not taken. The protestors in London will later join the events organised by Women’s Strike Assembly at Oxford Circus from 3pm.

The action in the UK is part of a wave of Extinction Rebellion International Women’s Day actions in Colombia, Spain, Turkey, The Gambia, Pakistan, Nigeria, Uganda, DRC, Belgium, Israel, The Philippines, Switzerland, Argentina and the UK. Full international press release can be found here.

Why is climate a women’s issue?

A January 2020 report by the International Union for the Conservation of Nature found that climate breakdown and environmental degradation are driving an increase in violence against women. [1] The report found that deforestation and the degradation of land mean women have to travel further to collect the things they need, like firewood, and are exposed to violence, rape and abduction when they make these journeys. Furthermore, when natural disasters hit, which is happening more and more as a result of climate change, women are exposed to sexual violence in evacuation camps. Women who take action to protect their land from destruction are also often targetted with sexual violence as a result.

UN figures indicate that 80% of people displaced by climate change are women. [2] Globally, women are more likely to experience poverty, and to have less socioeconomic power than men. This makes it difficult to recover from disasters which affect infrastructure, jobs and housing. For example, after Hurricane Katrina in 2005, African American women were among the worst affected by flooding in Louisiana. [3]

Sarah Mintram, former teacher and member of the Extinction Rebellion International Support Team, who took part in the action in London, said: “It’s mainly women in poorer countries in the global south that are experiencing the increase in violence but this will be the reality for all women if the climate and ecological crisis continues to go unaddressed.”

“We are here to raise the alarm about what is happening to our sisters around the world and to tell women in the UK the climate and ecological emergency is your issue – it will affect you as a woman if we do not persuade our government to take urgent action starting now.”

Thilaka from Extinction Rebellion India, says: “The fingerprint of climate change is responsible for invisibly devastating the lives and livelihoods of millions of women in India, particularly those employed in agriculture.”

Avishka from Extinction Rebellion Sri Lanka described how climate breakdown is putting new pressures on women’s lives, as they may be left to fend for themselves and their families when men are forced into economic migration as a result of the climate and ecological emergency: “A woman effectively becomes mother, father, husband, wife and breadwinner until the husband’s return.”

“Women, predominantly responsible for food and cash crops for income, are forced to prioritise one crop over another as rain becomes unpredictable and infrequent,” says Anette from Extinction Rebellion Uganda. “Stark choices force additional pressure on marginalised households, leading to increasing tensions and the very real and common risk of domestic violence.”

“Rising temperatures mean increased insect populations and thus infestations, making deadly diseases such as malaria and dengue a year-round issue, instead of only seasonal.” Elle from Extinction Rebellion Philippines, said. She “Food and water scarcity brought about by a heightened dry season will not be helpful to any homemaker.”