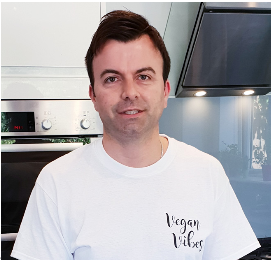 A plant-based diet isn’t just good for the environment, but also for our health and animal welfare. I’ve been vegan for 4 years and it’s one of the best life choices I’ve ever made. At first I found it hard to believe that I could live without meat, eggs and dairy. I needed protein – didn’t I?

I did some research. Protein is found in most plant-based foods and the majority of us are consuming too much of it, and not enough fibre.
A diet high in animal protein has been found to cause several diseases
and has a huge negative impact on the planet. Luckily, nuts, seeds, peas, tofu, soya, tempeh, beans and pulses contain high amounts of protein. It’s also in broccoli, bread, oats and thousands of other plant foods.

All protein (amino acids) comes from plants. The animals we consume eat the grass and grains, and then we eat them. Meat is recycled protein that we can get straight from plants, removing the animals from the scenario. Many professional athletes, footballers and bodybuilders are adopting a plant-based diet to improve their performance and physique. Don’t worry – you won’t have to eat grass!

Whatever you eat now, you swap for a plant-based version. When I’m planning dinner, I’ll make what I’m craving and create a vegan version

If you think you’ll be eating rabbit food, then you’ll be pleasantly surprised. Whatever you eat now, you swap for a plant-based version. When I’m planning dinner, I’ll make what I’m craving and create a vegan version. This is one of the best tips for beginners to going vegan.

People see a vegan diet as boring and restrictive, as you’re cutting out animal products. Yes, I’ve cut out a few animal based foods, but I’ve simply substituted them with other foods that are better for me and the environment. Why not give it a try? I’m certain that you won’t regret it!