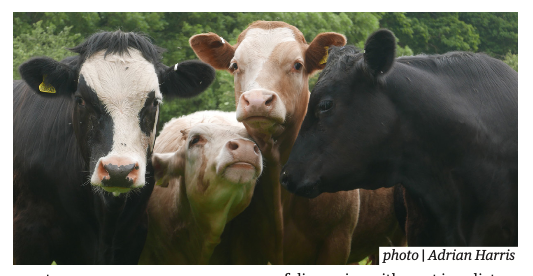 THE IMPACT OF LAND USE FOR DIET

Studies estimate that food production accounts for 19-29% of greenhouse gas emissions, 80-86% of which are agricultural. Agriculture is itself a threat to biodiversity and increases the risk of soil degradation. Modern society and the rise of capitalism has seen the middle classes expand within developing countries and this leads to increasing demands for foods with high environmental impact.

The national recommended diets (NRDs) of many countries provide a guide to healthy eating. In high- income countries, NRDs are moving towards increased vegetable use. Yet NRDs in such countries, like the UK, go no further than being a qualitative suggestion. Climate change and environmental sustainability have little effect on dietary policy; such policies call for consideration in food choices and the possible reduction of meat consumption, but little else. Meanwhile, lower-income countries are focusing on providing sufficient caloric and protein intake, leading to an increase in environmental impacts.

The World Health Organisation estimates that 3 billion people are malnourished globally. One of the main accepted reasons is the declining per capita availability of land, water and energy resources. This means that the use of land for dietary purposes is becoming more and more vital.

Reducing the consumption of meat and other animal-based foods in the developed world could free up between 766 million and 1.6 billion acres

Vegetarianism and veganism are potentially better alternatives to reducing environmental impacts, reducing individual carbon footprints by up to 73%. Cutting meat and dairy products could reduce global farmland by up to 75%. In order to keep up with population growth estimates of 9.7 billion people by 2050, the world will have to increase food calories by 70% to be able to feed everyone. Therefore the best use of land potentially becomes
a question of which are the best crops to grow and which animals, if any, to rear.

Animal-based foods are, in general, more resource-intensive than plant-based foods. Reducing the consumption of meat and other animal-based foods in the developed world could free up between 766 million and 1.6 billion acres, depending on the type of approach used.

The two main scenarios advocated are animal ptrotein reduction and vegetarian diets. The first scenario involves halving the consumption of meat, dairy, fish and eggs while vegetarianism requires the elimination of meat and fish from the diet, but an uptake in dairy consumption.

While many of the advantages of dispensing with meat in a diet remain clear, vegetarianism and veganism are not without their own issues. A recent investigation by Unearthed found that the Environment Agency has little control over the fertilisers used on farmland and discovered that sewage waste, containing pollutants and toxins, is routinely used. Approximately 78% of the UK’s sewage, around 3.6 tonnes, is spread over farmland every year.

Diets need to change and NRDs need to include the impact of the production food systems on the environment when considering how to guide a nation towards healthy and environmentally- friendly eating.