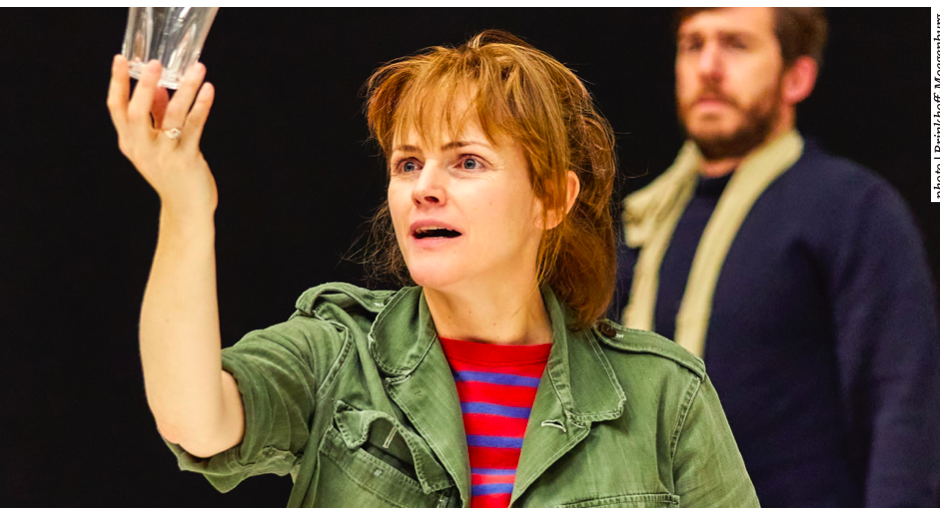 Jessica Townsend meets Maxine Peake, an actress keen to talk about the climate and ecological emergency

When Maxine Peake enters the small back room at the National Theatre for our interview, she is tall and glamorous: so far so showbiz. But it’s only when she begins to speak that I’m smitten: this woman is smart, hilarious and speaks with a distinctive Bolton accent. Proudly working class, Maxine Peake got by on pure talent.

Thankfully she has plenty to spare and as a result has been cast in many fantastic roles. In theatre, she’s played Blanche DuBois in A Streetcar Named Desire and Winnie in Samuel Beckett’s Happy Days. In Hamlet she’s played… Hamlet. On TV, she’s appeared in Silk, Black Mirror and Shameless. In film, as the lead in Funny Cow, and in Mike Leigh’s Peterloo. To name just a few examples.

Peake’s new play is by Lucy Kirkwood of Chimerica fame and it is a kind of Twelve Angry Females set in rural Suffolk during the mid-Eighteenth Century. In the play a group of women have to decide whether a young woman is pregnant; she has been sentenced to hang something and that will be mitigated if she is judged to be with child. Before urine tests made life simpler, ascertaining pregnancy was not cut and dried.

The production is a strong, well-achieved piece bursting with ideas and with a striking cast of women of all backgrounds. It’s heartening that the National is staging ambitious work by young women playwrights. Maxine Peake’s central performance holds the piece together, which leads me to question how her activism fits with her acting.

Peake gets straight to the point when I ask her about this: ‘To be honest the real lightbulb moment was reading Naomi Klein’s book, This Changes Everything, and thinking: Oh of course. Capitalism not only destroys us financially, but also environmentally.’

Many in the environmental movement have come to hold anticapitalist views after realising what big industry and finance is doing to our world. Maxine Peake’s journey has been mixed. Although Peake isn’t a paid-up member any more, she is open that she used to be in the Communist Party. She wouldn’t necessarily call herself that these days, but she jokes that a Communist is a Socialist who means it.

It’s hard because people will have to make sacrifices. It will mean you can’t go on holiday by jumping on a plane. We will have to reshape the way we live

The people who most influenced Peake’s views were her family members: beginning with her step-grandfather Jim, himself a Communist until his death 7 years ago.

‘I remember being a youngster at school aged ten or eleven at the height of the miners strike. Everything was kicking off. I used to get taunted: “Your grandad’s a Commie!!” I remember a teacher at school saying “Communism and Fascism have a hair’s breadth between each other” and feeling furious, really furious.’

Peake’s mother’s approach to life has also been a strong influence to her: ‘When I was a kid my mum wasn’t political but she used to put herself out to do things like recycling. Part of our routine every week was a trip to the bottle bank. I used to love to hear them smash. She didn’t discuss it. It was just the right thing to do.

‘She would stop for people at the bus stop and give them a lift because she felt it was better to drive a full car. But she wouldn’t have called herself an environmentalist. To her it was about community.’

So Peake grew up with a diversity of views: political rhetoric from her step-grandfather, and a practical ethical approach from her mother. Later, Peake drifted away from politics when she developed the drama bug that led her to London to study: ‘I just got so wrapped up in studying, acting. But I didn’t lose my beliefs.’

When I ask if Peake has children, she hints that the environment was part of her decision-making process. ‘My step- grandfather Jim was always asking, how could people bring a child into this world? That stuck with me. Of course I had a great relationship with him so in a way, he was getting the benefit of other people’s choices to have children.’

From an early age Maxine saw children as a choice rather than an inevitability. ‘But then life comes along, you get into a relationship and think of settling down. And lots of my friends were getting pregnant.

‘So for a while I thought: if it happens, it happens. If it doesn’t: I’m fine with that. Not having a child of my own saves the planet one person’s carbon footprint. Not that I want to criticize anyone else’s decision. And this young generation seem pretty inspiring. People sometimes imply that not having children means I’m not interested in the future of our planet, but you could say the opposite is true.’

‘Of course I feel invested in the next generation. I’m ashamed of where we are. You can speak to the younger generation who think we did nothing. We forget that people did make huge moves.’

Although she sees that people are better off financially than when she was young, Peake wonders if they are any happier: ‘I think every generation thinks there’s too much stress and pressure on young people. But I look at social media and it’s abhorrent. Having that whole pressure. It’s all so much about how you look, what you’re doing in your life. Mental health is suffering.’

Peake keeps abreast of environmental news and is a fan of Greta Thunberg: ‘It’s appalling that anyone should criticise a young woman who knows her own mind and stands up for the environment. She’s extraordinary and we should all be getting behind her.

‘It’s so hard to engage people these days. People are educated to look out for their own interests. It’s hard to engage them on a bigger level. We need to keep educating ourselves about the environment. Lots of people still can’t see it. People are still finding excuses. Extinction Rebellion has changed things and now the media are heightening awareness but there are still a lot are smokescreens and pooh-poohing.

‘It’s hard because people will have to make sacrifices. It will mean you can’t go on holiday by jumping on a plane. We will have to reshape the way we live.’

Peake has made some of these sacrifices, but has reluctantly gone back to car ownership: ‘I lived in London until I was in my early thirties. I didn’t need a car, but now I live in the North, there’s an issue with the transport system.

‘A friend of mine has a sister ill in hospital in the Wirral and had to take three buses. After 5 in the afternoon, it becomes impossible. And there’s still a feeling that buses are transport for poor people. We have to change this. We have to make it so that people love getting on the bus.’

This is exactly the topic that so many activists, like Greta, have been clear about: that the solutions that are available to us need to be rolled out, and ultimately, it needs to be easier and more appealing for people to make more ethical lifestyle choices.

Peake’s last thought is this: ‘We have got to get back to our roots. Back to the Earth. If you’re not connected with what you stand on of course you will make bad decisions.’

She’s right of course: it will be a combination of rootedness and imagination that will help us to tackle the planetary emergency. Perhaps part of this is also the role of creativity that Peake champions: acting is part of her activism. Either way, Maxime Peake is likely to be part of our national conversation for decades to come.

The Welkin plays at the National Lyttelton Theatre until May 23rd