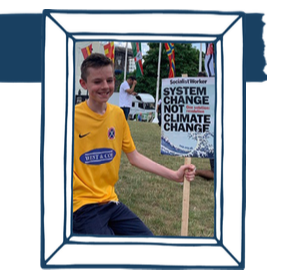 No, I have not been brainwashed

‘What do you think of climate change?’ I often ask people.

Or they may reply, ‘we’ve left it too late’, which I can stomach but still I’m puzzled. To put this into context, I usually hear this response from older people, and it sounds like they’re really thinking, ‘well it won’t bother me anyway so…’

They are telling the truth bar one solitary word – the word is ‘too’. It’s late to act, but it’s not ‘TOO late’. There is still time to turn the situation around.

Don’t be disheartened following that last response, as there are a third group of people who reply ‘It’s awful, that’s why I…’ and they proceed to tell you about the things they do. They tell you about the vegetables they’re growing to how they’re only taking local holidays (no planes!), or how they’ve reduced their meat consumption. These are the people you’ve got to admire, fully aware of the emergency and are trying to adapt their lives to take better care of their environment.

we are actually underreacting

After the initial responses to my question I often go on to say ‘well I’m part of Extinction Rebellion’ and this causes controversy – but at least they know who we are… Or who they think we are!

Here are a few of the labels I then get: hippy, middle class, over the top. Now let’s just unpick these first two by saying that we are ordinary people concerned about the climate emergency and we come from all walks of life. Then to the latter I say, we are people who unite behind science – climate science – hardcore evidence. How is that ‘over the top’?

I’d say that as a global population we are actually underreacting, so if you look at the government’s lack of action, our ‘over the top’ reaction is necessary.

One last label that I have experienced, especially as a young person, is that of being ‘brainwashed’ because I’ve supposedly been ‘scaremongered’ by people saying the world is ending.

My response to this idea of being brainwashed is that actually, I have been presented with scientific evidence that is shocking and sad to hear. I heard it and decided to act.

Hopefully soon people will stop with the stereotypes and act if they aren’t doing so already.
To those who are acting – keep going.