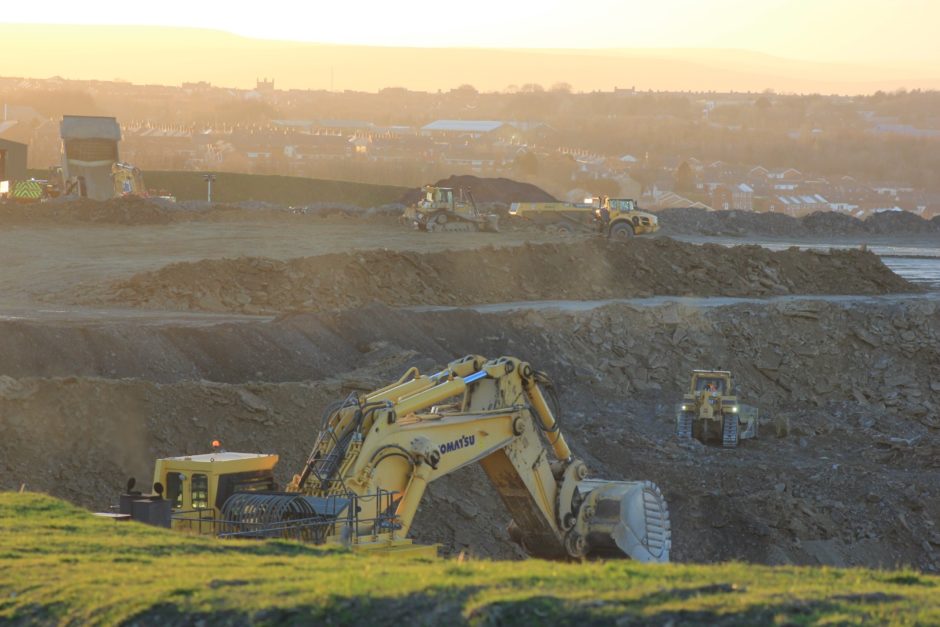 From 6am on Ash Wednesday 26th February, protesters will begin a three-day mass action at the Bradley open-cast coal mine site in the Pont Valley in Durham.

The ‘We are the Dead Canaries’ action sees Extinction Rebellion activists and local campaigners join forces to blockade the mine and shut down mining operations with a series of acts of nonviolent civil disobedience at the Open Cast Coal Mine, A692, Consett, DH8 6RS.

The blockade forms the culmination of a four week campaign against the proposed expansion of the mine, which notably included the digging up of the grass bank outside the Ministry of Housing, Communities and Local Government in Central London a fortnight ago. [1] As the first of many acts of nonviolent civil disobedience targeting fossil fuels around the UK, it also serves to launch the 40 Days of Action for Lent, co-organised by Christian Climate Action and Extinction Rebellion Faith Groups. [2] Various other actions are planned during the day on Ash Wednesday itself and throughout the whole of Lent – details to be announced.

Over 300 protesters, including members of Extinction Rebellion, Christian Climate Action, local residents and the ex-mining community, are expected to participate in the Durham coal mine blockade. This unlikely alliance is calling upon Durham County Council and the UK Government to reject Banks Group’s application to expand the mine, ahead of the planning committee’s decision in March.

The Banks Group are planning to extend the open cast coal mine in Bradley, Pont Valley, Durham despite the UK’s commitment to phase out coal in 2025 and become carbon neutral by 2050. Coal is the most polluting of our fossil fuels. [3] To honour the Paris agreement and stay below 1.5 degrees of global warming we need at least 80% of known coal reserves to stay in the ground, Bradley included. [4]

Planning Permission for the mine was refused by Durham County Council three times, in response to a massive public outcry, with 3,000 locals formally logging objections to the application and almost 90,000 petitioners demanding its refusal. [5] Now, more than 5,500 objections have been submitted against the planning application. The Durham Miners’ Association support the campaign to Protect Pont Valley, and have long opposed open-cast coal mining. [6] With both the UK Parliament and Durham County Council having declared a Climate Emergency, coal power being legally phased out by 2025, and with just five coal power stations still operating in the UK, proposals to further expand the scale of operations and of the site are totally out of step with the prevailing mindset of public opinion, as well as present economic and scientific realities. Even national treasure Sir David Attenborough recently described the ongoing use of open-cast coal mines as “shameful”. [7]

The Council’s repeated rejection of the initial application for the Bradley mine was overruled by the Planning Inspectorate, serving the Ministry of Housing, Communities and Local Government. In Spring 2018, Sajid Javid, then Secretary of State for Housing, Communities and Local Government, called off the creation of an open-cast coal mine in Druridge Bay on environmental grounds. [8] As the current Secretary of State, Robert Jenrick holds the power to stop Banks’ Bradley open-cast expansion. Jenrick has a reputation for protecting historical landmarks both in Britain and around the world. Those taking action suggest that he provides the same diligence in protecting Pont Valley. Tomorrow’s action is intended to send him a message, asking him: “which side are you on?” – that of the people of Durham, the UK and the world, or Banks Mining Group, seeking to profit at enormous expense.

There are strong links between the Conservative Party and the Banks Mining group through Lord Ridley, a Hereditary Peer who has consistently undermined the science on carbon pollution. [9] He owns the land where the Banks Group run their Shotton Surface Mine and receives payment for the mine. [10] Allowing the expansion of the open-cast will symbolise the Johnson government favouring climate skepticism and vested commercial interests over a commitment to secure the planet’s future.

With creative and reflective energy, this action aims to create financial disruption to a business that is actively killing the landscape of future generations. We want to close the workings of a coal mine, both the transporting of the coal and the mining of the coal, in a way that will see Extinction Rebellion doing what it does best: mass civil disobedience, proving that business as usual is untenable in a Climate and Ecological Emergency.

The Government must tell the truth by declaring a Climate and Ecological Emergency, working with other institutions to communicate the urgency for change and acting now to halt biodiversity loss and reduce greenhouse gas emissions to net zero by 2025. We will be enacting these things: ‘telling the truth’ about what the Government is enabling, and attempting to achieve a local demand by halting the destruction and biodiversity loss. Defeating Banks’ expansion plans will demonstrate that this country and government are truly serious about confronting climate change.

The blockade will be an entirely peaceful event, with refreshments nearby and entertainment from local performers. From 12.30pm on Wednesday 26th, folk musician Bethany Elen Coyle, who grew up in Old Greencroft, half a mile from the site, will be performing and leading the singing of environmental protest songs. She’ll be followed by a series of speakers; inspiring local campaigners and activists, alongside political and scientific members of  the University and College Union at Durham University, who are currently on strike.

Kevin Haigh’s grandfather, father and three uncles were miners. Kevin’s father promised that his son would “never go down the pit”, describing it as a “dirty, nasty, dangerous place’”. Kevin, 73, a retired steelworks manager from Birtley, County Durham, who will be at the protest, says: “Banks’ Group say it’s better to mine here, rather than import our coal. To that scientifically dubious claim, I say – would you like to die from Russian coal or UK coal? We don’t want to die from any coal pollution!”

Lauren Conway, 26, from a former mining family in Barnsley, who will also be at the action to protest against the Bradley mine expansion, explains how she is doing so on the same principles that were embodied in mining communities: “Our proud history of struggle was not to keep digging coal; my uncle and grandads, and their grandads, hated it. It was for the livelihood of our community, and to secure their families’ future. Today, that same fight for a bright, same and happy future for our young ones means no more digging up coal.”

June Davison, local resident and Protect Pont Valley campaigner, says: “I appreciate Extinction Rebellion drawing attention to what’s happening in the coalfields of Durham and Northumberland. So often we hear about oil and gas. It’s almost as though people are too incredulous to believe that coal is still being extracted and burned in the UK. If the government are serious about meeting climate targets and cutting the use of fossil fuels, leaving coal in the ground is the obvious thing to do.”

“It’s so disappointing that in the last two years we’ve written to three Secretaries of State for Communities – Sajid Javid, James Brokenshire and Robert Jenrick – and none have given a valid response to our request to stop Banks Mining digging up the Pont Valley for coal. And now Banks want to expand a site that the Secretary of State(s!) haven’t even made a decision on. It will be shameful if Durham County Council ignore their own declaration of climate emergency and approve this application.”

Jackie Scollen, local resident and member of Extinction Rebellion Durham, adds: “Durham County Council have declared a climate emergency. Now they need to show us that they mean it. Our communities were destroyed by the closure of the mines, then the industry came back and decimated our land with opencast extraction. Coal is our heritage, not our future.”

Chris Riches, 19, an Extinction Rebellion co-ordinator at Newcastle University, says: “It amazes me that we’re in 2020 and still there are companies applying to dig up more coal even though to meet the 1.5 degree target of global warming, 80% of it must stay in the ground. The UK currently has more than twice the amount of coal in stock piles than it can burn before it’s legally phased out by 2025 and yet around 85% of the coal at Bradley mine will only have use for burning in power stations. Banks Group are already being taken to court over environmental crimes on the Bradley site and it’s an honour to stand shoulder to shoulder with local residents and support them in their campaign.

Living and studying in the North East, I do believe there needs to be more investment in the region but precarious jobs that will end in 2021 is not the way to go about it. Banks should use the money they want to spend on extracting the extra coal from Bradley Mine to invest in their workforce, transferring them to the renewable arm of their company and giving them more secure jobs that can help build a greener future.”

XR Action: We Are The Dead Canaries.

[9] http://www.rationaloptimist.com/blog/the-benefits-of-carbon-dioxide (he also owns the land)

1.    Government must tell the truth by declaring a climate and ecological emergency, working with other institutions to communicate the urgency for change.

3.    Government must create and be led by the decisions of a Citizens’ Assembly on climate and ecological justice.

·   In the UK, come to one of our events, join the Rebellion Network and let us know how you can help out.

·   Start a group where you are: in the UK or around the world.

·   Check out the International

XR website, with links to the French, German, Italian and UK websites.

·   And while your time and energy are of most importance, if you are financially able to donate money, see our crowdfunder.