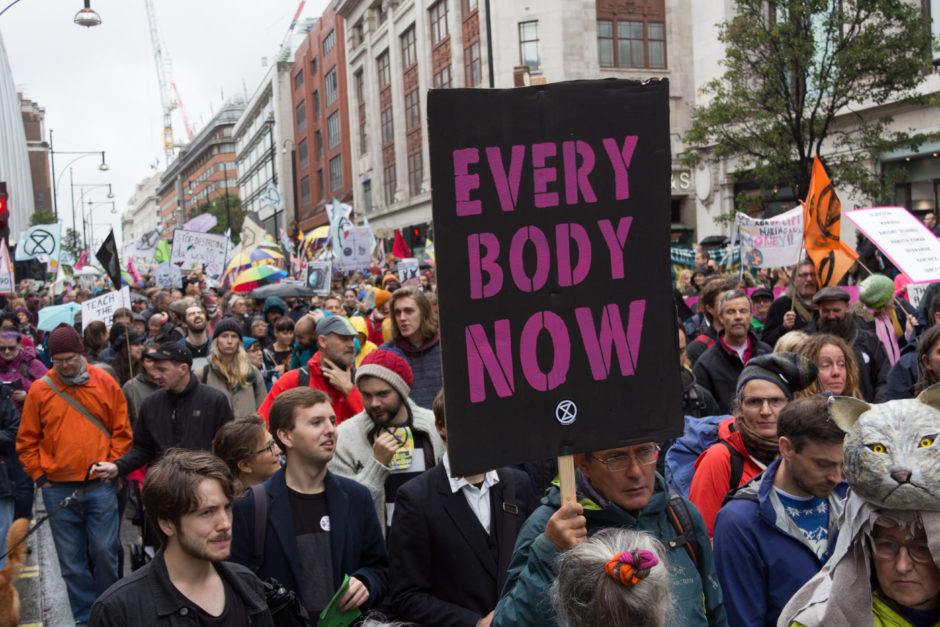 This Saturday 22nd February, Extinction Rebellion UK and allied movements will march through Central London to say ‘Enough is Enough’ to inaction on the climate and ecological emergency. The march – held in collaboration with Parents 4 Future – is Extinction Rebellion’s first of many national protests in 2020 where they aim to work together with wider movements for change.

Because this emergency isn’t just about Extinction Rebellion. It’s about all of us.

Starting at 1pm at Russell Square, those participating are encouraged to wear pink and red and “get creative” by making hearts to pin to their sleeves. By adopting the colours of love, marchers will show Londoners they are an open, compassionate and nonviolent group of ordinary people acting out of love for the natural world, and concern for their future. The route will wind its way past the Shaftesbury Memorial Fountain at Piccadilly Circus – also known as “Eros”, the god of love – where people will be invited to take part in ‘Disco-bediance’, before ending at Parliament Square where they will be joined by speakers such as the actor, Robert Sheehan.[1]

A deviation from Extinction Rebellion’s nonviolent direct action approach, the march will act as a more inclusive pathway for new people not yet ready to participate in civil disobedience. Along the march route there will be an engagement team welcoming people, providing them with information about the emergency, trainings and Extinction Rebellion local groups.

Last week Extinction Rebellion UK launched their new strategy for 2020, outlining plans to bring 1 million more people into the movement by the end of the year. One of the key strategic aims is to “Grow our connection to, and understanding of, wider movements for change, building stronger relationships, co-creating new stories and visions for the future.” The march will act as a launch point for the new strategy, calling on allied movements for change to join them in this show of collaborative strength.[2]

Monika Neilson, 28, march organiser and Extinction Rebellion activist said, “We know we can’t do this alone and that Extinction Rebellion are a small part of a much larger, powerful climate movement. This march is the first step this year to work closer with allied groups and build our united, collaborative strength to bring about the rapid change we need in the face of the climate and ecological emergency.

Because together we’re powerful and the closer we work together, the more of an impact we’ll have. This march invites everyone who cares about the right to peaceful protest to join us in saying enough is enough to being called extremists for standing up for what’s right, enough is enough to racism, oppression and separation, and enough is enough to the fires, floods and droughts that are destroying lives and the natural world.”

Beth Marc, 32, from Parents for Future said, “Due to the pressing nature of climate breakdown, we see more and more climate action groups emerging all over the UK, and all with the same goal in mind – to demand climate justice. Collaboration between our groups is vital in demonstrating the true power of the people to instigate change. This Saturday, we will march together, in a unified call to demand immediate action to be taken on the climate and ecological emergency we are all facing. We are all one.”

The march follows recent accusations made by counter-terrorism police labelling Extinction Rebellion – and other organisations such as Greenpeace and UK Uncut – as an extremist ideology.[3] This was followed by LBC’s Nick Ferrari launching a campaign called ‘Enough is Enough’ calling for increased police powers to shut down Extinction Rebellion protests.[4]

When the march wraps up around 4pm, participants will have the opportunity to keep the day’s momentum going by joining Extinction Underground at VAULT Festival at The Vaults beneath London’s Waterloo Station. As part of their recognition of a Climate & Ecological Emergency, VAULT Festival have invited Extinction Rebellion, Culture Declares, Music Declares and others to join them to hold a late-night interactive and immersive event, where rebellion, protest and the arts meet.[6]

VAULT Festival Directors and Producers May Burtchur and Andy George, said: “Through VAULT Festival, we try to bring colour, excitement and a feeling of community to our corner of the world every winter – but we are part of something much bigger. This is the only planet we’ve got, and we are declaring a climate and ecological emergency. Changing our current course requires vigilance and effort from everyone and every organisation – however large or small, and there is no time left to delay.”

Joining 80+ artists and activists at Extinction Underground in a display of circus, dance, live music, DJs, short films, performance and interactive activity, actor Robert Sheehan will be hosting a participatory wildflower seed ball making station: “I feel duty bound as a human being to help tackle the Climate Crisis. Its effects we’ve seen thus far are chilling. No Planet B. All we have is this little pocket of beautiful blue air and water in infinite cold space.”

“Rewilding is about inspiring and engaging people to restore natural processes. This means repairing damaged ecosystems and reintroducing lost species – which is increasingly important in the face of the climate and ecological emergency. In making seed balls to plant wildflowers together at Extinction Underground, people will be introduced to the world-building ethos of the climate movement and encouraged to take action after the event.”

Tickets for Extinction Underground can be bought here: