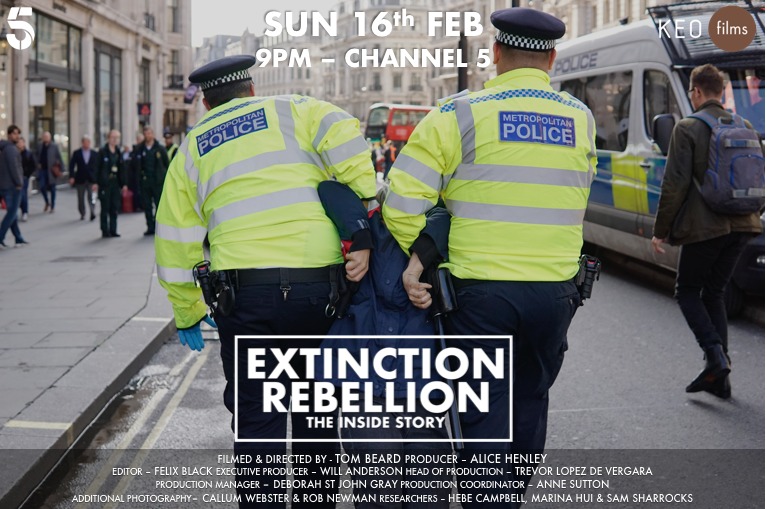 9pm Sunday 16 February – Channel 5’s Inside Extinction Rebellion. A message from the Director

Keo Films’ Tom Beard, Director, and Alice Henley, Producer, began following Extinction Rebellion in the run up to last year’s October Rebellion, with intimate access to our headquarters (and thoughts) both before, during and after the two-week London protests.

Their documentary, which goes behind the scenes of coordinated civil disobedience, reveals just some of the self questioning and soul searching within Extinction Rebellion. We’d like to thank Tom and Alice for their interest, enthusiasm and support over a fast-paced few months, and encourage everyone to tune in at 9pm on 16 Sunday 16 on Channel 5.

We asked Tom if he could give us some insight on the experience.

When I was asked if I’d like to direct a film about Extinction Rebellion as they carried out their next big rebellion – I was immediately intrigued by the idea.   Who was this movement that had sprung into my consciousness from nowhere over just a few months?  How did they organise themselves?  And how did they justify their controversial tactics?

Plunging into the world of the XR national HQ in East London (as well as spending time in Manchester and Bristol) felt a bit like stepping into an alternative reality.  The barrage of acronyms and phrases I had to have explained to me were vaguely reminiscent of a corporate world, but the attitude was entirely different: from a lack of decision making hierarchy to the priority placed on a ‘regenerative culture’ within the office itself, the effect was disorientating at first, but also bracingly refreshing.

The level of thought being applied to every aspect of the approaching rebellion took me completely by surprise.  Here was a community very aware of the history of social movements, actively discussing and applying those lessons to create maximum impact on the streets.  This is not something I’d anticipated from the newspaper headlines – and as a film-maker, I couldn’t wait to follow how it played out.

Filming on the streets of London throughout the October Rebellion itself was certainly exciting, with the response by the Metropolitan Police suggesting that some influential cages were being rattled.   But as the rebellion progressed, it was the soul searching within such a young, self-aware movement that became the clear narrative on the inside.  XR’s non-hierarchical nature, with groups able to act in its name as long they adhere to its fundamental principles, may have allowed the movement to flourish in numbers, but – as the action on the Tube showed – it also provides its biggest challenge as it tries to define itself.

Ultimately, however, it feels like this self-questioning is to the movement’s credit, while the police’s hierarchical attempt in London to silence the urgent tactics of a climate emergency has been rightly exposed as unlawful.  Most worrying, though, is how badly this knee-jerk reaction to try and gag Extinction Rebellion misses the point.

Inside Extinction Rebellion: Martyrs or Maniacs is on Channel 5 this Sunday, 16th February at 9pm: https://www.channel5.com/show/extinction-rebellion-the-inside-story/