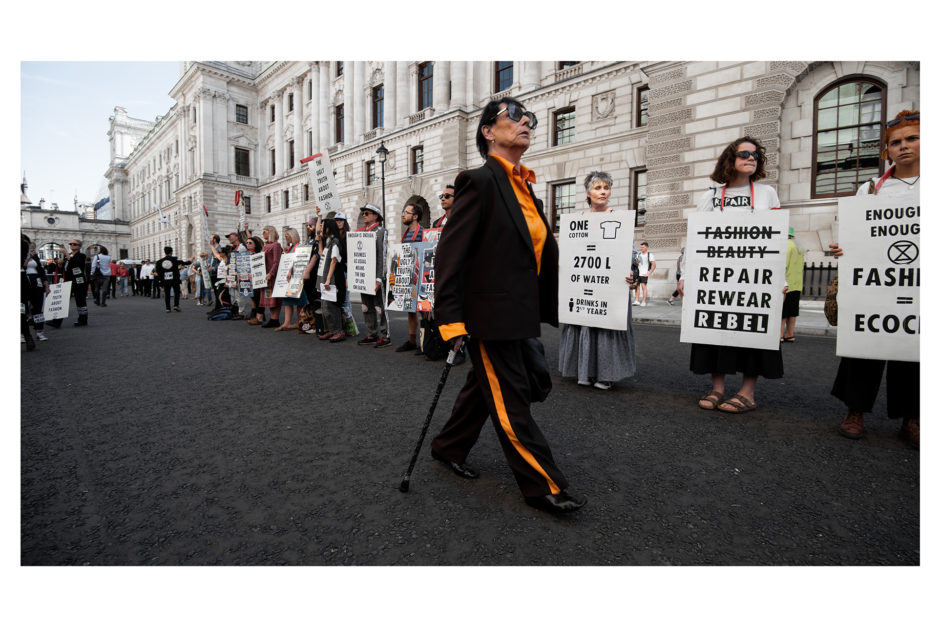 On Monday 10th February, Extinction Rebellion delivered a letter demanding the cancellation of September 2020 fashion week and an emergency action plan that supports BFC’s stakeholders through transition into a new format: one that directly addresses the underlying issues of obsolescence, overproduction, and exploitation. And, as a government funded body which uses a Political Engagement Programme to lobby for the industry, Extinction Rebellion calls on the BFC to lobby for the Three Demands Bill and “propose the legislation needed to stop the fashion industry’s exploitation of planet, people and animals.”

“It is now 2020, the year we must start to see meaningful reductions in emissions if we are to avoid irreversible breakdown, and yet we see no credible plan from industry leaders. We are back at London Fashion Week to deliver an ultimatum; the industry must address the core of the problem and also admit the change needed is not possible without governments stepping in,” says Alice Wilby, sustainable fashion consultant and member of Extinction Rebellion’s Fashion Action team.

Extinction Rebellion have asked the British Fashion Council for a “reply to this letter before London Fashion Week that confirms your commitment” to the demands.

As the second season Extinction Rebellion has asked for a cancellation, the group plan to build pressure until their demands are met. They encourage others from the industry to join in support of the demands. Bel Jacobs, animal rights campaigner and member of the Fashion Action team says, “despite Caroline Rush and the BFC saying that they would declare emergency, there is no emergency action but tweaks to business as usual. We need to know how emissions and the loss of biodiversity will be addressed.”

The industry is changing but its footprint only grows

But whether it is fast fashion on the high-street, or luxury fashion paraded at global fashion weeks, the desire for constant newness that fashion promotes is fundamentally unsustainable. Government failure to hold the industry to account for its true environmental and humanitarian cost results in ongoing overconsumption and waste.

The Global Fashion Agenda reported that despite all the talk of change, a transition towards sustainable practices is plateauing at a time when it needs to accelerate [1]. Progress is also far outweighed by the growth in consumption. The industry is set to grow by 81% between 2019 and 2030 [2], increasing its climate impact by 49% [3]. Despite talk of circularity, only 1% of clothing is recycled into new clothing[4].

As said by Caryn Franklin MBE, “Creatives and visionaries are delivering radical solutions to tackle waste and toxic output.”  But as they are subject to an unsustainable system, this often doesn’t result in meaningful change. A sustainable, circular or regenerative industry is only possible with the urgency needed through major government intervention.

The British Fashion Council and London Fashion Week are failing to support and protect the British fashion industry through changes needed and are now lagging behind the pioneers. Franklin adds: “London Fashion Week as it stands, is no longer best practice. With this realisation, the UK fashion community looks to the British Fashion Council for a transformational leadership position on future imperatives.”

“It would be wonderful to see the BFC finally take a lead on sustainability and work with the industry to try and achieve true and measurable solutions to this urgent issue we all face,” says Livia Firth, Co-founder and Creative Director of Eco-Age.

Professor Dilys Williams FRSA, Director of Centre for Sustainable Fashion, a research centre based at London College of Fashion, University of The Arts London, joins the campaign, saying: “We ask all involved in fashion to place earth and equality first, to respond to XR demands and to recognise those designers and fashion practitioners who create prosperity in social, ecological, cultural and economic dimensions.”

The BFC is again exhibiting ‘best practice’ in a ‘Positive Fashion’ space, but neither this, nor the participants of the tradeshow must adhere to environmental or ethical standards. “It is not enough for garment brands to use the climate emergency to generate yet more profits through the creation of so- called ‘sustainable clothing lines’. They need to do more and the British Fashion Council must support, encourage and pressure them to commit to real change,” says Labour Behind The Label.

The system needs a deep revisioning: “Instead of fashion weeks, what we need are events that enable people to think, to imagine a future, not this useless carousel. We are quickly moving towards the extinction of life as we have known it up to now. What are we doing about this crisis? Business as usual. As I write, we are in another round of this mad (maybe beautiful, eye-captivating and useful for traditional business) carnival“, says Simone Cipriani, UN Officer, Founder and Head of the Ethical Fashion Initiative.

“As the initiator of the original London Fashion Week some thirty five years ago, I believe now is the time for drastic change in how we do things. We are in a different world, a world of emergency and need for drastic action.  Creating a central catwalk venue as a showcase for young British designers, as I did all those years ago, alongside the creation of the British Fashion Awards gave our emerging talent the opportunity to be seen by the world’s fashion buyers and media and established London as a centre of world style.  It is time for us to be innovators and initiators again, coming together in conversation on how the fashion industry can benefit the planet and not contribute to its demise. Manufacturers, retailers, designers and the consumers must discuss now how we can work and live and spend in a different non-exploitative manner, to benefit all and especially the generations to come.” Lynne Franks, Founder of London Fashion Week and Grandmother of Seven.

One year on from their first action at London Fashion Week, Extinction Rebellion are present for the third season to make it clear: ‘This season’s must have is the continuation of life on earth.’

Outside the main London Fashion Week venue, 180 The Strand, we’ll have creative actions, music, block printing on second hand clothing, speeches, food and family activities. Through this action, Extinction Rebellion wants to use the power of creativity to vision a better world.

The letter to the BFC is part of Extinction Rebellion’s continuing campaign to persuade fashion to Tell the Truth about the climate and ecological emergency, to act in accordance and back the Three Demands Bill.

XR Fashion Action is a group of industry practitioners within Extinction Rebellion. They are behind the industry-facing Fashion Tell The Truth campaign, the Cancel LFW campaign and the Boycott Fashion campaign urging people to stop buying new clothing and materials.