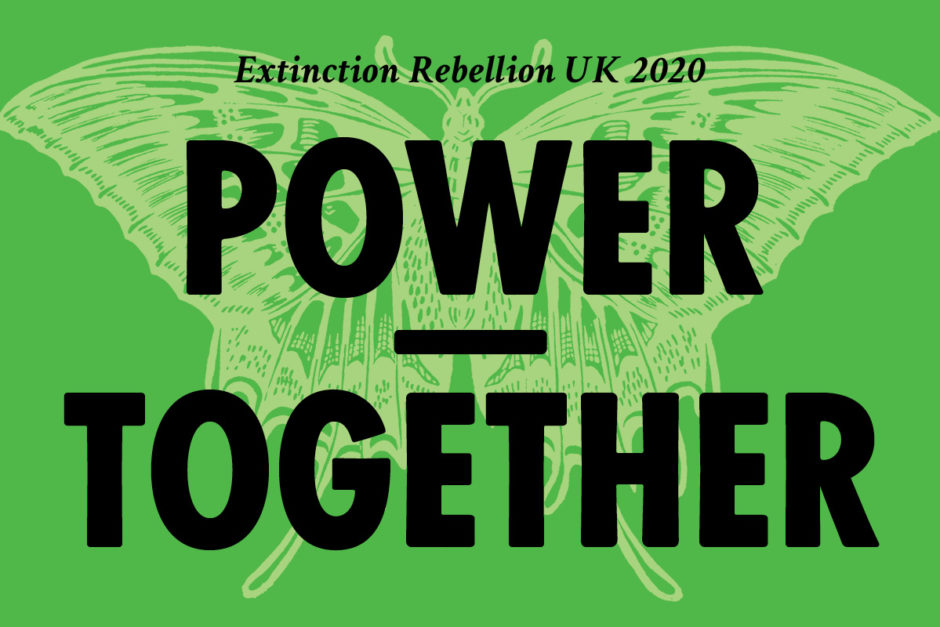 Extinction Rebellion UK launch new strategy: ‘In 2019 we demanded change. In 2020 we begin building the alternative’

Extinction Rebellion UK today launched its new strategy for 2020. The new strategy invites people to come and join together during this important year to face the climate and ecological emergency. Let’s be part of the greatest generation there has ever been, let’s create the new: ‘In 2019 we demanded change. In 2020 we begin building the alternative.’

The strategy aims to be a guide for newcomers and those already involved across the country to make Extinction Rebellion their own and to use their knowledge, creativity and passion to deliver a diverse, regenerative, and decentralised rebellion. This is the year rebellion goes beyond the streets and into the fabric of everything we do.

“It is time for us to recognise the new story emerging from these dark times,” commented Gail Bradbrook, co-founder of Extinction Rebellion. “We all share fears for the future, for our families, friends and communities. For our neighbours, for those already suffering, and for the natural world.

“2020 is the year that we face our fears together. With this strategy Extinction Rebellion is offering an invitation to all to come together in courage so that we can build resilience in our communities and create the change we want to see – rather than waiting for those in power to do it for us.”

Key goals for the year and some of the ways we intend to achieve them include:

Extinction Rebellion today also announced a number of key dates for this year:

On COP26 – An old story is ending, a new one beginning.

On COP26, the UN Climate Summit due to take place in Glasgow this November, Extinction Rebellion stated: “National policies and international climate agreements have failed for 30 years and we expect COP26 to be no different. While we know the eyes of the world will be on COP26 and we will be factoring that into what we do, we will not be depending on it.

“Presented by some as our last hope for change, it will not give us the solutions we need. This is why we will aim beyond it.  We will push for a Global Citizens’ Assembly to ask the difficult questions that must be faced if we are to tackle this emergency. Thus ordinary people can lead the way in creating the answers.”

Now in over 75 countries, Extinction Rebellion has grown since inception in October 2018 to more than 121 groups across the UK, with 485 groups worldwide. In the UK, more than 180,000 people are signed up to its newsletter, with YouGov research (January 2020) showing that almost 2.5 million UK adults who rate climate as their top issue, think Extinction Rebellion has had a positive impact on the cause. Recognised as the #1 global influencer on climate awareness, it has seen phenomenal growth bringing many on to the streets alongside other movements to say enough is enough to inaction on the climate and ecological emergency. [1]