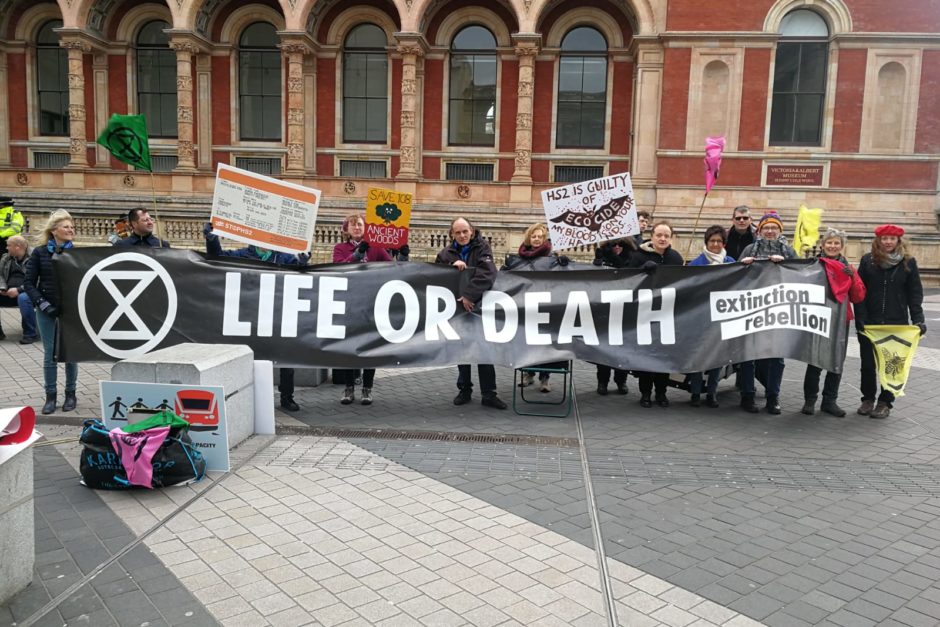 This morning, Extinction Rebellion welcomed politicians and media as they arrived for the COP26 launch event at London’s Science Museum, where Boris Johnson and David Attenborough are in attendance. With banners saying ‘This is Change’, ‘ Tell the truth’,  ‘Burning Earth’ and ‘Life or Death’, Extinction Rebellion stated:

“We are here to tell politicians that 2050 is too late, that COP26 has been set up to fail, as have all previous COPs. Listen to the science, we are currently heading for a 4 degree C plus world, which is rapidly showing that it will be hostile to humanity.

“Children all around the world are exposed and vulnerable to this climate and ecological emergency. Can you imagine? Children are dependent on us adults for their protection. As people engage with information about the emergency, they imagine what’s going to come in the future. How do we want to be remembered as adults, what legacy do we want to leave for our children?

“The Government has said 2020 is the year for ‘climate action’. We totally agree – but so far we have seen very little climate ambition. From the local to the global, from the north to the south, leaders need to act now. To act together. We invite Boris Johnson and all leaders to step up to this historical moment. Where there is political will, there is a way.”

Net zero by 2050 puts human civilisation at great risk. It gives us just a 50/50 chance of limiting warming to 1.5C, according to the UN. For a two-thirds chance, the UN says we need to hit net zero by 2040. We’ve already passed the date to be sure of keeping temperature rise below 1.5C – and we are heading to 4C plus as governments continue to invest in fossil fuels.

Speaking to Boris’ comment that this is a technology challenge, Rebecca Wicker, MSc, a 29 year old PhD candidate in environmental biotechnology and member of XR Scientists, said:

“Carbon capture is not enough. Reforestation and urban greening are incredibly important, make no mistake; and while abiotic methods of carbon capture are not yet emissions-negative, they are worth developing further. But all of these methods combined cannot even come close to balancing our current emissions scenario. Think of it like heart disease. You can take medication to mitigate some of the symptoms, but it’s still going to kill you if you don’t cut back on the McDonald’s. Carbon capture is medication, but system change is the cure.”

The climate and ecological destruction has already caused catastrophe for millions fighting for their lives and livelihoods across the world. They’re under attack by droughts floods, wildfires, typhoons and cyclones such as Idai, the worst weather-related disaster in recorded history in the Southern Hemisphere. It is time for World leaders to put climate and ecological justice at the forefront of this challenge.

“I am fast realising that COP26 is being designed to fail, just as it has done for 25 years. It breaks my heart as people my age in their 30s with small children are desperate to believe a liveable future is possible for our children, grandchildren and great grandchildren.

“The tide has to turn, because the direction we are heading is death for the natural world, and total extinction.This was all predicted, and the financial and banking world hid this knowledge because it was at odds with their economic model of infinite growth. We are being let down over and over and over again. This system is broken, and there is a new kind of system out there.”

“It is now clear the UK government intends to undermine the 1.5C threshold target by supporting aviation expansion in the Air Traffic Management Bill, its refusal to implement a rapid ban on the sale of new petrol /diesel cars and the decision to postpone a CCS trial to 2025.

“The UK government’s policies show it has refused to implement the IPCC’s call for 45% cuts by 2030 and sends an incredibly powerful signal to the world ahead of COP26 that 1.5C is dead.”

Caroline Vincent, a 57 year old PhD consultant to the pharmaceutical industry and a member of Extinction Rebellion

“We are saying that we are cleaning our house but, we are still investing in fossil fuels by the back door. At the recent UK African summit a few weeks ago, 90% of the commercial energy deals were made in fossil fuels, despite the UK commitment to clean energy deals.

“The UK claims to be responsible for 1% of the global emissions but at minimum, the City supports directly or indirectly, some 15% of global CO2 emissions. At a time when people like Aidair Turner, chair of the Energy Transitions Commission, is calling for stricter regulations to increase our chances to meet the Paris agreement, it is devastating to realise  this government is still not telling the truth, which is the first step towards recovery.”

Sam Smithson, a 37 year old ex-fashion designer who has given up her job to be part of Extinction Rebellion

“We are all out of time. There is no negotiating climate agreements with the science – it is not up for debate. Planting more trees alone won’t halt this emergency, if we continue with business-as-usual and eternal growth. The only thing that will halt this emergency is every person coming together and demanding systemic change. Together we are strong.

“I’m here to ask our world leaders to Tell the truth. In the UK, when parliament declared a climate and environment emergency, the very same day the Government agreed to Heathrow airport expansion. Let’s hope we don’t see a repeat of that today with the COP26 on one hand and HS2’s fate on the other.

“I’m here today because as a scientist and as a father I’m terrified.  I’m terrified that people think COP is the answer when the clue is in the name – COP26. This 26 year old process has helped to bring us to this emergency. Instead, we need a Citizen’s Assembly.”